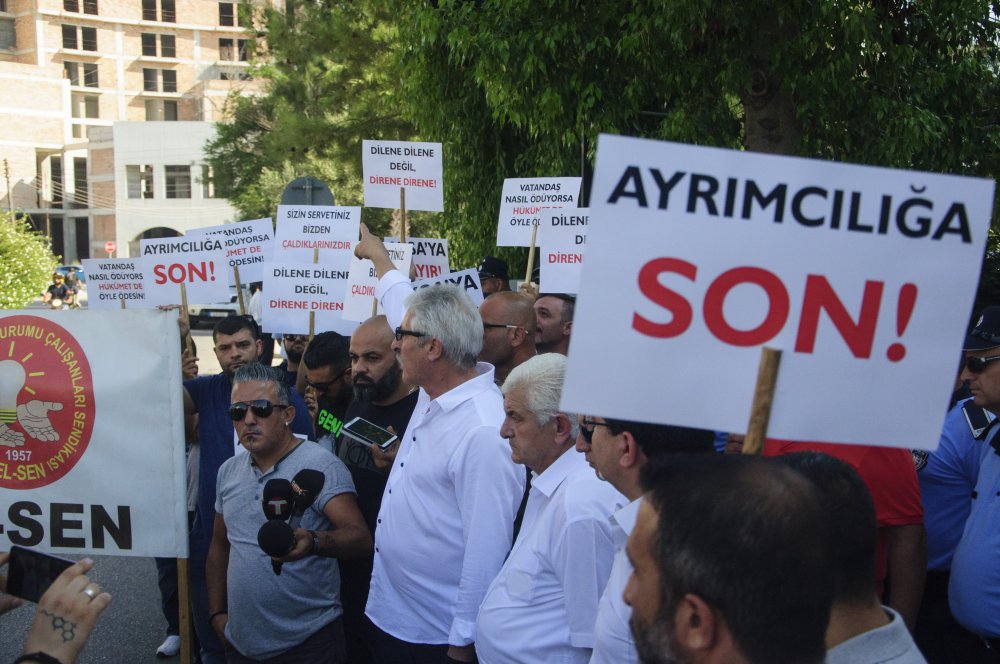 Turkish Cypriot trade union EL-SEN, which represents workers at the North Cyprus’ Electricity Board KIB-TEK, has cut the electricity to the Finance Ministry after it repeatedly failed to pay its electricity bill. The union claims the debt has risen to 110 million TL, which the TRNC Government refutes.

At a protest outside the Finance Ministry on Thursday, 29 August, EL-SEN said its action was designed to send a firm message to the government and other organisations that the non-payment of bills would not be tolerated.

The Ministry of Interior was said to owe 17 million TL.

The action was condemned by Erdal Onurhan, chair of KIB-TEK’s board of directors, who said only KIB-TEK was authorised to cut the power suppliers to customers.

TRNC Prime Minister Ersin Tatar was also critical of the action, accusing the trade union of doing its sums incorrectly. He stated the Finance Ministry was not responsible for the electricity debts of local councils and the state broadcaster BRT, and when these were considered, the government owed nothing to KIB-TEK:

“Because [electricity bill] collections include 10% KDV [value added tax], which remains in the KIB-TEK till”.

Prime Minister Tatar added, “If the costs [being claimed for] are outside of the Treasury’s budget, then that debt is the relevant organisation’s debt [not the Treasury’s], and arrangements [to pay off the debt] must be made directly with that body.”

Many members of the public have supported the trade union’s actions, with many reminding officials of the strict system in place for consumers who fail to pay their monthly bills. Those who fall behind for three consecutive months are not only disconnected until they pay their bill in full, but also have to pay a reconnection fee.

Multiple TRNC government ministries, councils and other government bodies have historically run up large electricity bills, which they have failed to settle on time. The problem also extends to the private sector, especially in the hospitality sector.

In 2017, a high-profile case involving Cratos Hotel came to the fore. The luxury hotel in Kyrenia had enjoyed continuous power supplies despite owing KIB-TEK hundreds of thousands of Turkish lira, trade unionists claimed.

In February 2017, EL-SEN wrote to the head of Sayıştay [TRNC government auditors] asking them to investigate reports that the hotel’s alleged 9 million TL debt had been wiped by KIB-TEK.

The hotel’s owners, Bumerang Travel Club Ltd, had fought a court case claiming it was not liable for the KIB-TEK debt, accumulated since the hotel’s operations started in 2011, because these expenses were covered by the government. The owners asserted that free and reduced cost electricity was among the raft incentives offered by the TRNC government to investors.

In 2017, Cratos won a case against the government after proving in court it wasn’t liable for its five year electricity debt totalling 6.3 million TL

Cratos won the case, and a further investigation by Sayıştay also upheld the decision, confirming in its June 2017 report that free and reduced rate electricity was indeed offered by the TRNC Government as an inducement to investors. The report stated the Treasury was obliged to pay Cratos’ electricity debt of the past five years, which totalled 6,269,453 TL. In essence, the hotel’s huge debt was left to the TRNC taxpayer to pay off.

At a press conference on Monday, EL-SEN made clear it was unhappy with KIB-TEK and the government’s response, and said they planned more action until the authorities respected their demands.

The trade union laid out its concerns that the government plans to privatise KIB-TEK, and may use the lack of profitability as justification. EL-SEN officials also expressed their discontent at the terms of the economic deal recently struck between Ankara and Lefkoşa.

As a result Özkıraç announced “ongoing strikes”, starting from this Friday, as part of the trade union’s “resistance” and to ensure Turkish Cypriots remain “in control” of their resources.