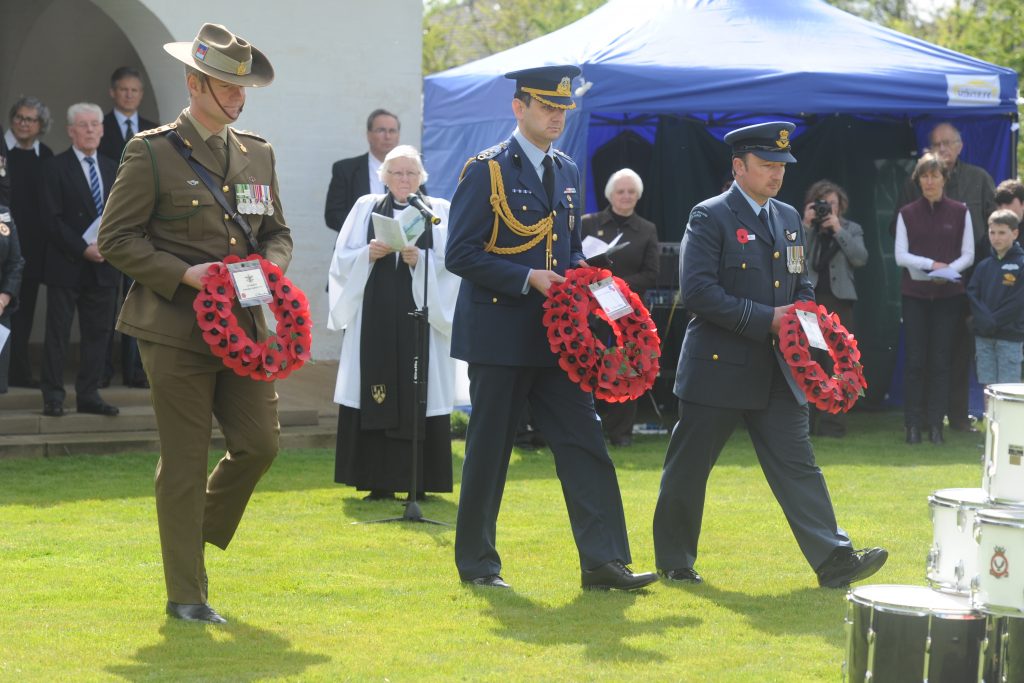 The first ANZAC Day Parade in living memory to take place at Cambridge City Cemetery was held on Saturday April 22nd, led by a former Commander of the Royal Air Force.

The Turkish government was also represented by its Defence Attaché in the UK, Wing Commander Onur Kıyıcı, in recognition of the special bonds of respect and friendship which developed between adversaries during the Gallipoli campaign. They were accompanied by the RAF Honington Band and a detachment from the City of Cambridge Air Cadet Squadron.

Welcoming them, organiser David Bailey, Chairman of the Cambridge Royal Air Force Association (RAFA) said the impressive ANZAC area had lain forgotten for years, and that it was entirely appropriate that the city should now recognise how vital Commonwealth help had been to Britain’s survival, and the central role played by Cambridgeshire airfields during the Second World War.

He said: “I was alerted to their presence by a Cambridgeshire Family History Society article, which pointed out that not only is there ‘some corner of a foreign field, which is forever England’,  but that  there is also a large corner of a Cambridge field that is forever ANZAC.”

Opening the ceremony, Air Chief Marshal Sir Michael Graydon, GCB, CBE said the cemetery contained   graves of some Gallipoli survivors, a reminder of the WWI campaign which had produced many fine future commanders, including New Zealander Sir Keith Park, who commanded the RAF during crucial parts of the Battle of Britain, General Slim, who defeated the Japanese in Burma, and of course the founder of modern Turkey, Kemal Atatürk.

The campaign had also forged bonds of respect between ANZAC and Turkish forces which survived to this day, he said, adding: “Gallipoli also alerted the western world to the abilities of Kemal Atatürk, one of the greatest leaders of the 20th Century. If you have not read his biography, do so .His epitaph for the ANZAC fallen shows the measure of this great statesman.”

Wing Commander Kıyıcı then reminded the parade of the famous words of Atatürk at the end of the campaign: “There is no difference between the Johnnies and the Mehmets to us, where they lie side by side here in this country of ours. You, the mothers, who sent their sons from far away countries, wipe away your tears. Your sons are now lying in our bosom and are in peace. After having lost their lives on this land they have become our sons as well”.

After the service, which was conducted by RAFA Chaplain Pam Read and the Royal British Legion County Chaplain, Revd Alan Jesson, the National Anthems of all nations represented were played, and  wreaths laid at the memorial stone by Wing Commander Kıyıcı and representatives of the Australian and New Zealand High Commissions, as well as the Cambridge Royal Air Force Association, the Royal British Legion and other organisations.

City Councillor Rod Cantrill, who laid a wreath, has worshipped just yards from the cemetery for over 18 years. He told the Cambridge News:

“I had no idea of the existence of this fine memorial until now. I am proud that so many ANZAC graves have been discovered in our city. It reminds us how important Cambridgeshire was to the UK’s defence in WW2, and of the huge debt we and the rest of Europe owe to our Commonwealth cousins.”