Every Saturday since 1995, a group of mothers have been holding a vigil in Galatasaray Square in the heart of Istanbul. Their aim is simple: justice for their missing loved ones. Their weekly peaceful protest serves as a constant reminder to the Turkish authorities that they will persist until they obtain answers on the fate of their relatives who disappeared while in custody and the prosecution of those responsible for their suspected deaths.

Saturday 24th Sep. was the 600th anniversary of the Saturday Mothers’ weekly sit-in. They were joined by hundreds of other relatives, politicians and concerned citizens to mark the occasion.

After a security sweep in Beyoğlu, an estimated one thousand protestors gathered beneath a huge banner that read “Cumartesi Anneleri 600 haftadır aynı yerde” (‘Saturday Mothers in the same place for 600 weeks’). Photos of the missing were laid out on the floor, with carnations scattered among them. Many also held up placards bearing the names and photos of their loved ones with the date they had disappeared.

A statement was read out by Serpil Taşkaya, a member of the Istanbul branch of the Commission for Those Missing in Custody:

“This is the 600th week of the peaceful protest that was first started on 27 May 1995 by the relatives of those persons whose fate remains unknown after they were taken into custody by [Turkish] security forces and by people who have supported their human rights campaign that demands: ‘We want our missing’.”

“Every Saturday at 12 midday, we carry the [memory] of the hundreds of people that went missing in custody, collectively raising our voices in Galatasaray to demand recognition that their disappearance is a crime, the need for accountability [for their deaths], and to bring about peace and justice.”

Serpil’s own father, Hüseyin Taşkaya was taken into custody in Urfa on 6 December 1993 when he was aged 42. His family have not heard from him since. Last October, Mr Taşkaya’s mother Fatime died after spending 22 years seeking news about her missing son.

Turkey’s Saturday Mothers were inspired by a similar movement in Argentina. Called the Mothers of the Plaza de Mayo, the group held a regular vigil to demand information about their children who had disappeared during the country’s military dictatorship during 1976 and 1983.

Many people suffered a similar fate after Turkey’s military coup in 1980 and again during the state of emergency that was maintained throughout the Kurdish insurgency in the 1990s. The total silence from the authorities on the fate of their loved ones prompted around 30 mothers to launch their vigil on İstiklal Caddesi – one of Istanbul’s busiest streets – in 1995.

Each week, the women would gather at midday in the square outside the gates of the famous Galatasaray High School for 30 minutes. Peacefully they made their presence felt, yet they also became the target of violent attacks. As a result, the mothers stopped their vigil in March 1999. They resumed their weekly sit-in a decade later, on 31 January 2009.

The case of Hasan Ocak

The movement has grown considerably since 1995, with families coming together to campaign about the fate of the missing and for justice.  Some 1,200 cases of disappeared persons have been filed with Turkey’s Human Rights Association (IHD). Most date back to the period after the military coup of 12 Sept. 1980.

One of those affected is Maside Ocak, whose brother Hasan Ocak was taken into custody in Avcılar on 21 March 1995 while he was making his way to his mother’s home to celebrate his sister Aysel’s birthday. Hasan’s tortured body was found two months later, on 15 May, in an unmarked grave in Beykoz forest in Istanbul, where many other “unclaimed” bodies were also buried.

For 55 days his mother Emine knocked on every door to find out what had happened to her son. Throughout that time, the authorities maintained Hasan Ocak was not in custody.

An autopsy showed the thirty-year-old had been strangled to death. His face had been severely disfigured and torture marks were found all over his body. According to witnesses, he was last seen in the custody of a branch of the Anti-Terrorism Forces.

Unable to get answers from the state about how her son died, Emine Ocak took her case to the European Court of Human Rights (ECHR). In July 2004, she was awarded €25,000 for the state’s failure to protect Mr Ocak’s right to life. In its ruling, the ECHR found the state had failed to properly investigate the case, or present evidence to back up its claim that Hasan was not in custody at the time of his death and that he was not killed by Turkey’s security forces.

“Nothing has changed. The same 12 September 1980 mentality still exists”

The family remains committed to getting justice for Hasan Ocak. His mother Emine and sister Maside are among the original members of the Saturday Mothers group, attending virtually every vigil since its inception.

“A lot has changed over the years and yet very little has changed,” Maside Ocak told Middle East Eye (MEE).  “It is telling that we mark the 600th week in the midst of a state of emergency.”

On 20 July this year, the Turkish government declared a three-month state of emergency following the failed military coup attempt five days earlier. Thousands of people have been taken into custody since.

Another regular at the Saturday Mothers sit-in is Mikail Kırbayır. Now aged 65, he started to attend the weekly vigil after he retired as a public sector worker in 2001. His younger brother Cemil was taken away by the authorities in 1980 when they were living in Ardahan, northeast Turkey. Over a quarter of a century later, his family still await news on where his remains are.

“Nothing has changed. The same 12 September 1980 mentality still exists,” Kırbayır told MEE. “Cemil was an idealistic 26-year-old with absolutely no criminal involvement.  He was rounded up by soldiers on 13 September 1980 and taken to a prison in Kars. All officials refuse to say what happened after that.” 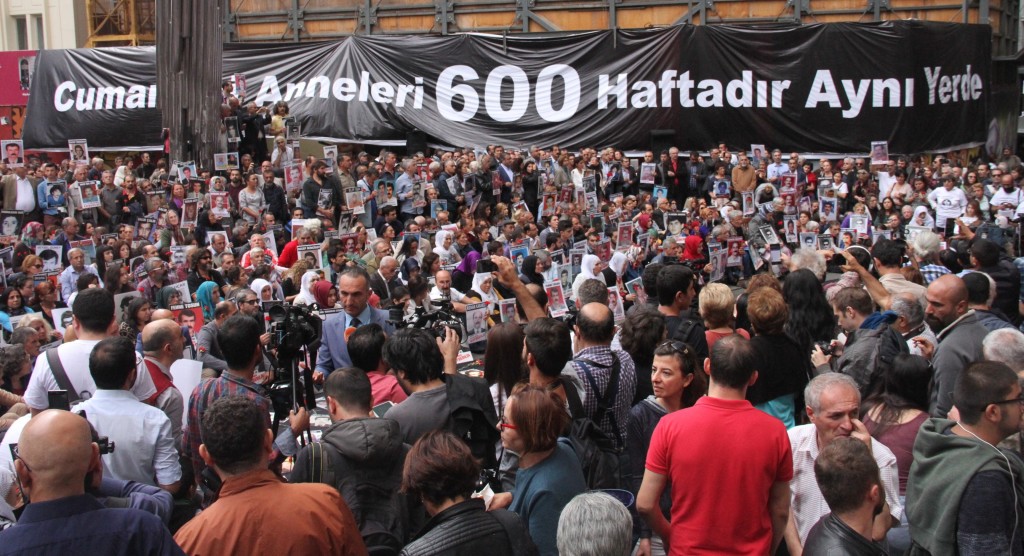 The family’s hopes were raised a few years ago when the Turkish Parliament investigated Cemil Kırbayır’s case. Their report included an admission that he had been killed while in state custody.

“But that’s that. It stopped there. There was no follow up and no one even provided any answer after that,” Mikail said.

While the primary aim of the Saturday Mothers is to learn about the fate of their missing relatives and to receive their remains so they can give them a proper burial, their peaceful protest also raises uncomfortable questions about the role of the state in the assumed deaths of the victims.

Turkey has a long history of militarisation and state-sponsored violence. Access to archives detailing alleged state orders to deal with ‘agitators’ remain strictly off limits. The Saturday Mothers demand these archives be opened to public scrutiny and evidence used to not only help identify what happened to those that disappeared while in state custody, but also to prosecute any state official found responsible for criminal activity, including murder.

For that to happen, Turkey needs to change its penal code, removing the statute of limitation on political murders and forced disappearances. The mothers are also pressing for Turkey to sign the UN’s International Convention for the Protection of All Persons from Enforced Disappearance.

Tragically, many of the original Saturday Mothers have passed away without ever knowing what happened to their children. However, as the 600th anniversary protest a fortnight ago showed, hundreds more are filling their places, continuing the fight to secure truth and justice for all those who have disappeared.

Unless otherwise stated, all photos from ANF News