Turkish Cypriot hellim producers can sell to EU through island-wide PDO, but will still face discrimination 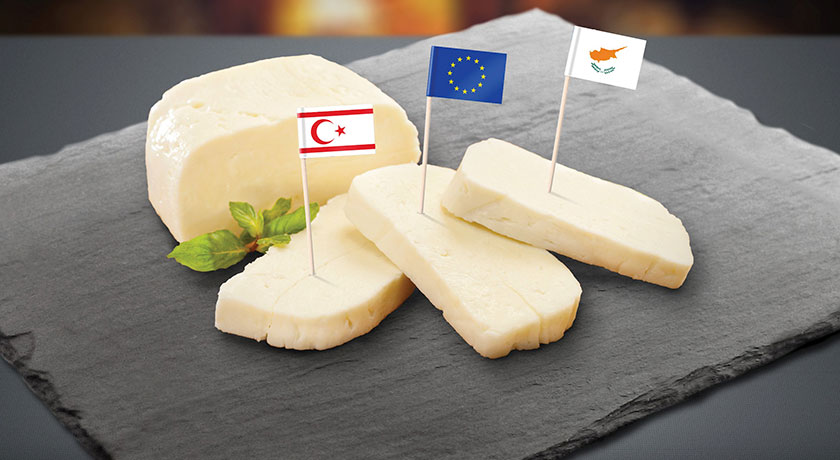 After years of disputes, Cypriot cheese – known in Turkish as hellim and in Greek as halloumi – has been granted Protected Designation of Origin (PDO) status by the European Union.

Member states “unanimously supported” the PDO proposals earlier today, which are applicable to “all parts of Cyprus”, according to a tweet by Elisa Ferreira, the European Commissioner for Cohesion and Reforms.

Part of the EU quality scheme, the PDO sets out the way food is “produced, processed and prepared” in a specific region. If a product fulfils all the criteria, it can use the PDO logo and approved product name, in Cyprus’ case, ‘hellim’ or ‘halloumi’. Producers creating a similar product elsewhere must use an alternative name.

Disputes between Greek Cypriot producers and their government over the different percentage of key ingredients in the cheese had caused major delays in registering the product with Brussels. Many cheesemakers are still unhappy with the PDO’s ratio of cow’s milk to sheep and goat milk, and plan to strike on 5 April.

Hellim wars also broke out across the North-South divide, as Turkish Cypriots lodged fierce objections to plans for EU hellim inspectors to report to South Cyprus over legitimate fears of bias. The concerns, which threatened to upend the Cyprus Talks between Mustafa Akıncı, then president of the Turkish Republic of North Cyprus, and his Greek Cypriot counterpart Nicos Anastasiades back in 2015, led to the EU suspending the PDO issue.

After six years, the newly approved island-wide PDO means that Turkish Cypriot hellim producers, denied the right to sell their cheese to Europe since a European Court of Justice ruling in 1994, can now do so through the Green Line Regulation providing they comply with the EU’s food hygiene and safety standards.

The vast new market will be a huge boon to producers in the North, but it comes at a cost. Unlike Greek Cypriot producers, Turkish Cypriots are still denied the right to sell direct to other EU territories.

Introduced by the EU Commission in 2004 at the insistence of Greek Cypriots, the Green Line Regulation requires all EU-approved items made in North Cyprus to be sold via South Cyprus. This EU restriction discriminates against Turkish Cypriots by adding extra time and costs to their business operations.

Glad 🇪🇺 Member States unanimously supported proposals to grant PDO to Halloumi/Hellim for producers in all parts of Cyprus and ensure it can cross Green Line Regulation. Shows that mutually beneficial solutions can be found for the 2 communities. EC will now finalise procedure. pic.twitter.com/NnDxda6pD4

The EU glosses over such disadvantages, instead presenting the PDO as benefitting both parts of the island: “[The PDO] Shows that mutually beneficial solutions can be found for the 2 communities,” tweeted Commissioner Ferreira.

Greek Cypriot leader Nicos Anastasiades hailed the Commission’s decision, “A milestone day for Halloumi/Hellim and our country. The EU has registered it as PDO. A shield of protection is now in place. Significant prospects for increasing exports of our national product, to the benefit of all Cypriot producers, Greek and Turkish.”

The joint letter recalled how Turkish Cypriot hellim producers had objected to the unilateral actions of the Greek Cypriot side in pursuing a PDO for halloumi and hellim. They had “lodged objections both before and after the application reached the commission, and took every opportunity to represent our concerns”. Despite this, the EU continued with the process.

Hellim is a vital part of TRNC trade, with overseas sales representing 37.5% of the TRNC’s total exports. The farm-to-fork sector also provides employment for around 17% of the TRNC population.

Desperate to expand into the EU marketplace, Turkish Cypriot producers have seemingly given up on their demand for equal treatment, but remain concerned about trading via the Green Line given ongoing “obstacles and difficulties concerning the movement of goods across the Green Line due to the stance of the Greek Cypriot side” the letter stated. One example given was “the refusal by the Greek Cypriot authorities to allow the crossing of Turkish Cypriot commercial vehicles.”

EU will be a lucrative new market for Turkish Cypriot hellim

There are also fears of anti-Turkish Cypriot bias as the company due to inspect and certify TRNC producers, Bureau Veritas, is a French multi-industry testing and inspection specialist with strong commercial links with the Greek Cypriot Republic of Cyprus. The issue of bias was raised by human rights group Embargoed! five years ago, which accused the EU of breaking its own rules after failing to consult with Turkish Cypriots.

At that time, Phil Hogan, the EU Commissioner for Agriculture and Rural Development, sought to assure Embargoed! that, “in the unlikely case that Bureau Veritas would not carry out effective and efficient  controls, would lack impartiality or would be subject to a conflict of interest……the Commission will intervene.”

A practical solution was offered by then TRNC Foreign Minister Emine Çolak, who said back in November 2015:

Minister Çolak’s suggestion, like others by Turkish Cypriots, have been routinely ignored by the EU.

As a result, Turkish Cypriot trade bodies demanded in their letter last week to “transparently see and examine the details of the terms of reference between Greek Cypriot Ministry of Agriculture and Bureau Veritas, to provide a sense of trust among two parties.”

They also asked for a 10-year transitional period so the North Cyprus hellim sector can “adapt itself to the new standards and procedures”. They also called for the EU to take “concrete steps in channelling the necessary technical and financial support to our dairy industry” during the transition.