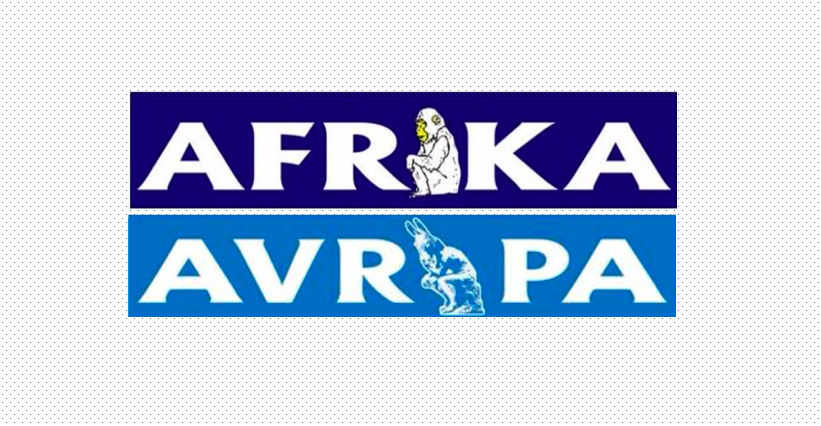 A left-wing newspaper in North Cyprus has reverted to its former name ‘Avrupa’ [‘Europe’] after African students accused the paper of “encouraging racism and stereotyping” for calling itself ‘Afrika’ and using a monkey in its logo.

On Thursday, 25 June, the paper’s front page bore the new Avrupa masthead, complete with a new animal icon, a donkey, which is synonymous with Cyprus.

The newspaper was initially called Avrupa when it first launched in September 1997. It ran as Avrupa until November 2001, when the paper’s assets were seized to cover the costs of unpaid fines and interest arising from numerous law suits filed against them by then President Rauf Denktaş.

The paper resurfaced as ‘Afrika’ on 15 December 2001 and has continued in print and online ever since, carving out a reputation for radical left-wing views. However, its name and choice of logo has continuously stirred controversy.

As commentary from the time of its inception shows, the name ‘Afrika’, Turkish for Africa, was chosen as a dig at the state of democracy in the Turkish Republic of North Cyprus (TRNC), which left-wing Cypriots commonly describe as a ‘banana republic’ [‘muz cumhuriyeti’]; the monkey icon within Afrika’s masthead added to that poor perception.

In the noughties, the number of private universities in the TRNC grew rapidly, as did the foreign student population. Among these were African students who were shocked to see such a newspaper with such a derogatory masthead in local shops. Efforts to get the paper renamed, or at least have the racist monkey icon dropped from the paper’s logo, failed to make any headway with the newspaper’s publisher and chief editor Şener Levent.

The long-running feud between African students and Mr Levent intensified in recent weeks due to the global prominence of the Black Lives Matter movement. Local and foreign students in North Cyprus held demonstrations to show their support for the movement, while seeking to draw attention to racism and discrimination experienced locally. One of the topics to come under their spotlight was ‘Afrika’ newspaper.

Although previously generating little mainstream media coverage in the TRNC, African students have regularly lobbied Mr Levent over Afrika’s name and logo, but the veteran journalist had steadfastly refused to budge.

In 2018, after more sustained pressure, the paper held a series of meetings with Black students and the editorial team agreed to drop the monkey icon. The students went away to design alternative mastheads and when they tried to present their ideas a month later, were informed the paper had changed its mind.

They explained the events of 2018 in statement recently issued by VOIS (Voices Of International Students) Cyprus: “The editors had effectively decided against changing its current logo, with the racist symbol, and insisted on continuing with it, reneging on their previous stance and agreement with us, about how problematic it was,” adding “All attempts to convince Mr. Levent otherwise, fell on deaf ears.”

When anti-racism became a global issue following the horrific killing of African American George Floyd, the students in North Cyprus tried again with Afrika. As VOIS Cyprus explained in the same statement, “we were particularly concerned that a newspaper which has historically claimed to stand for justice, freedom, fairness and human rights, would still knowingly display a symbol of racism, and insensitivity to the African people and continent, in such a flagrant manner in 2020.”

The anti-establishment publication, which champions the unification of Cyprus, has been the target of far-right attacks and abuse for years. Its controversial editorials regularly take aim at Ankara, incurring the wrath of President Recep Tayyip Erdoğan and his party faithful.

When it ran the provocative header “A Peace Operation for Cyprus, an Olive Branch Operation for Syria…Another Occupation Operation by Turkey” [“Kıbrıs’a Barış Harekatı, Suriye’ye Zeytin Dalı Harekatı… Türkiye’den Bir İşgal Harekatı Daha”] in January 2018, in response to Turkey’s anti-terror military intervention in Afrin, staff at the newspaper’s headquarters found themselves under siege by a horde of angry hard line nationalists determined to storm the building.

Şener Levent’s defiant stance on this and other contentious issues has made him the darling of the Cypriot left-wing, showered with awards on and off the island. The iconic figure therefore took it badly when the current campaign by foreign students to drop the Afrika name and logo attracted greater significance locally and among the Turkish Cypriot diaspora in Britain, and branded him a “racist” in the process.

Mr Levent fired back with several long posts on his Facebook page. In one, on 18 June titled “CONQUEST AND INVASION AND MONKEY” (“FETİH VE İŞGAL VE MAYMUN”), he claimed that “Those who accused us of racism have exaggerated the issue,” and described VOIS Cyprus’ efforts to change the logo as “a very ugly campaign”, threatening to sue the organisation for defamation:

“A newspaper, which is already targeted by fascists, now faces a barrage of fire from them. So let’s turn to the Law. Let’s solve this in court. I am a complainant and a plaintiff. I spoke to my lawyer.

“I will sue those who are running this campaign. I regard the accusation of racism as an insult and indeed a curse.”

Instead of quelling the backlash, it grew. Respected left wing Turkish Cypriot commentators in North Cyprus and London, who were speaking out against racism, turned their attention to the publisher’s actions. They called on him to reflect differently about the situation, underscoring the view that the logo and newspaper name were indeed “racist”.

Ertanch Hidayettin, himself a Black British Turkish Cypriot, and Artun Gökşan penned powerful articles on the naivety and ignorance of so-called ‘progressives’ in Cyprus. They gave example after example of how entrenched racism was in Turkish Cypriot culture, from common expressions to attitudes expressed about Greek Cypriots, and explained why symbols carry huge significance in perceptions, including the centuries-old dehumanisation of Black people by depicting them as monkeys.

By boldly highlighting the roots of simianization and the disparaging comparisons it evokes for people of colour, and the prevalence of racism across Turkish Cypriot society, other media soon became attracted to the issue. One of the most prominent is left-wing daily Yenidüzen, whose weekend colour supplement Gaile ran an extensive piece on xenophobia in North Cyprus, tipping the balance further in the campaigners’ favour.

By this point, Mr Levent had relented over the planned court case. He announced on social media that he was dropping the law suit, and had decided to change the newspaper’s masthead. Yet he maintains the action against Afrika newspaper was unwarranted claiming that, “the organised assault campaign launched against our newspaper turned into a lynching campaign.”

On 25 June, the newspaper presented its new look running with the front page headline “We revert back to the beginning. Oh we are donkeys.”

While many of the paper’s supporters applauded the decision, a few like Philippos Adamou called it “political correctness” for the paper to bow to pressure and change, and others, such as Serap Manavoğlu, felt there had been no case to answer in the first place as there is no such thing as racism in Cyprus. 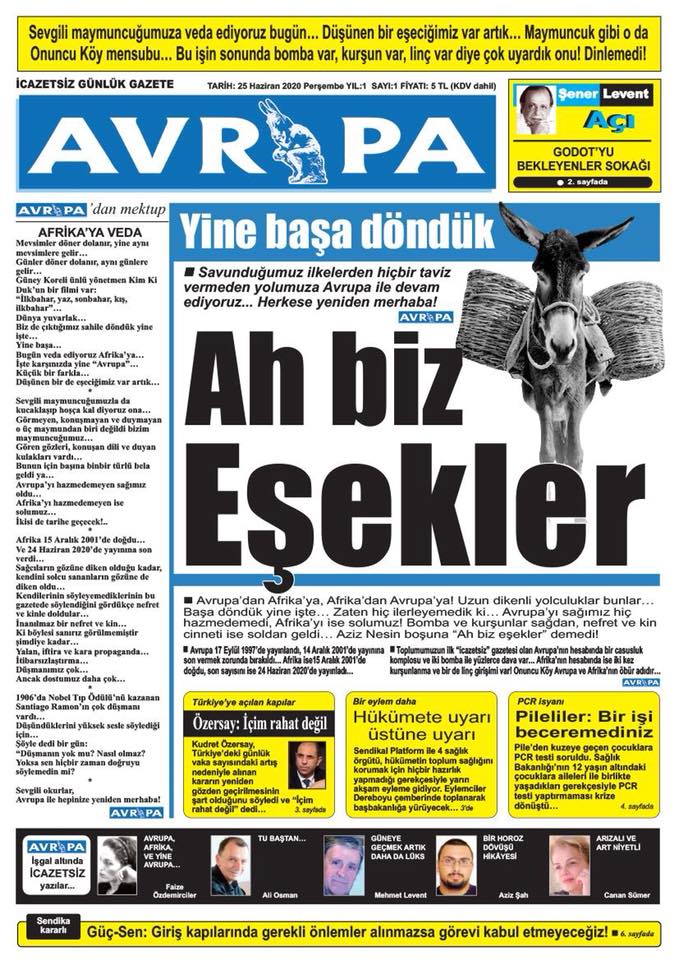 Writing on Afrika’s Facebook page beneath an image of the front cover on 25 June, Yıldız Ali Aşkım Evren said: “History is very brutal, but it should not be carried into the future. You just need to take lessons and take stronger steps forward. There should be brighter days ahead for the new generations. Or they will always remain a loser nation. I think the donkey is beautiful, I wish you good luck.”

Semsi Kerim wrote: “Seeing the error and correcting it was the only dignified act possible. My hope is that racism can change not only in the [physical] form, but also in thought, the love for the living, the peace within you.”

In contrast, Serap Manavoğlu posted: “Nobody believed that you [Afrika newspaper] are racist. [Both] those that read or don’t read you. Cypriots have never been racist. There’s nothing like that in their history, it’s ridiculous to even discuss it.”

Solon Antartis claimed, “The attack on Sener Şener Levent was and is orchestrated,” adding that “Fascist selective “anti-racism” will not pass.”

VOIS Cyprus has yet to respond to the newspaper’s name and logo change. However, it’s president Emmanuel Achiri, a Cameroonian and a PhD candidate in International Relations at Eastern Mediterranean University, posted this statement on VOIS Cyprus’ website and social media pages on 22 June in response to the news that the Afrika masthead was changing:

“The decision by Mr. Sener Levent that the logo of his ‘Afrika’ newspaper will be changed is a step in the right direction…It is a decision that comes with much relief to African members of our community in North Cyprus…”

“Regardless, this news should not be deemed a signal of victory by us, but should rather serve as a time of collective self-reflection.

“We are all but different parts of a whole, and when one part hurts, in this case being our African brothers and sisters, and their historical heritage, we should all seek to collectively reflect over our intended or unintended, and conscious or subconscious roles in propagating the trauma of others.”

“This was never a witch-hunt, but an additional means of seeking accountability which is at the very foundation of our organisation’s approach.”