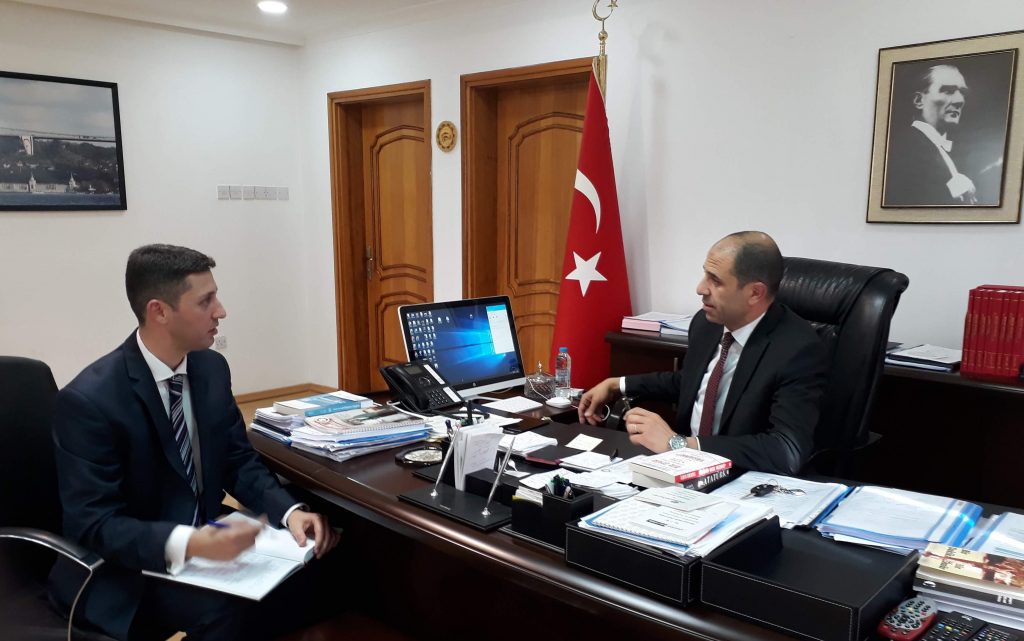 Britain has acted in an unbalanced way towards Turkish Cypriots since the start of its process to leave the European Union, North Cyprus Foreign Minister Kudret Özersay has said.

During an exclusive interview with T-VINE marking the 15th anniversary of historic referendums in Cyprus which saw Turkish Cypriots vote in favour of the “Annan Plan” for a unified Cyprus, but Greek Cypriots reject it, Prof Özersay accused the UK of failing to take a neutral stance on the island.

He said that Brexit – which has now been delayed to 31 October – meant that the UK was now less keen on engaging with the Turkish Cypriot authorities due to the status of its Sovereign Base Areas, which are located in the south of Cyprus.

“From the very beginning of the discussions on Brexit, probably because of the dependency of the UK foreign policy or the consent of the Greek Cypriot government for the Brexit agreement to be approved in the European Union, I don’t think their approach has been balanced,” he said.

Prof Özersay, who is also the Deputy Prime Minister, said that the “unfortunate” shift in British government attitudes was evident “even in official visits to London, or the possibility of Turkish Cypriot leadership and other officials having meetings in London”.

He continued: “The UK always performed a different role here by saying that ‘I am the colonial authority of the past, I know the history of this island, I know the equality, or the equal treatment to the parties within the framework of the Cyprus conflict, therefore, I can have special relations, I can visit the office of the President and I can send my high commissioner to the office of the foreign minister’, and so on and so forth.

“So in that sense, the UK was performing a unique, or different, sui generis approach here, including the relations with the Turkish Cypriots.

“But unfortunately, with the beginning of the discussions on Brexit, this disappeared.”

He said that while the UK was negotiating with the Greek Cypriot side on “the way the rules will apply in relation” to the British bases, they “missed one obligation”.

“Thank God, I must say, the [Brexit] meal which was cooked in the absence of our consent is not on the table.”

Prof Özersay called on the British government to “communicate with us properly and beforehand, before the meal is cooked”.

“This is a fair expectation of the Turkish Cypriot side,” he added.

British High Commissioner to Cyprus Stephen Lillie here talking to Greek Cypriots about Brexit, but his government is accused of ignoring the Turkish Cypriot side

High Commissioner @StephenLillieUK spoke at Nicosia Economic Congress today on #Brexit, Britain & #Cyprus. He noted that in spite of Brexit, co-operation between UK 🇬🇧 & Cyprus 🇨🇾 is deeper & broader than ever. President @AnastasiadesCY‘s recent UK visit a good example of this. pic.twitter.com/wHt6rb1f8H

The minister said, however, that Brexit could provide “certain potential opportunities” if the “British authorities are willing to use” them.

“It appears that with this type of relationship that will exist at the end of the day, when they leave the European Union, I do not expect the European Court of Justice [ECJ] to continue to have the jurisdiction over the relationship between the EU and the UK, and the UK market will be a different type of a market,” he stated.

“Therefore the 1994 decision of the ECJ about North Cyprus and our certificates will not, I believe, this is my expectation by the way, have that type of an effect.

“So it will open a window of opportunity for us in that sense, if they [the UK] want to use it. If they want to prevent it they may find another excuse… We are following that and we are giving certain messages to the UK authorities in that sense.

“Secondly, one should not underestimate the fact that after the Brexit process, Turkey will have a more important positional role as a trade partner for the United Kingdom.

“So what type of consequences will we be able to derive from that? Time will show us but I must say that we are trying to follow these processes and also affect these processes as much as we can either directly or via Turkey.”

Former TRNC presidential aide Ergün Olgun claims the UK  will “continue to appease the Greek Cypriots”, and that  “unofficial” meetings between the British &  TRNC authorities were “meaningless”

Former Turkish Republic of Northern Cyprus (TRNC) President Mehmet Ali Talat, also speaking exclusively to T-VINE, said that the UK did not want to take an “open position” against the Greek Cypriots following the failure of the Annan Plan of 2004.

“They tried for a solution, but not with all their efforts, not with all their powers” said Mr Talat, who held an historic meeting with the then Foreign Secretary Jack Straw at the Foreign and Commonwealth Office (FCO) in London in July 2004, in a bid to get the British to lift the economic embargoes and allow direct flights between the UK and Ercan airport on North Cyprus.

The UK Court of Appeal has previously ruled that direct flights between the UK and the TRNC would breach the UK’s international obligations under the 1944 Chicago Convention on Civil Aviation.

Ergün Olgun, a former presidential under-secretary and political adviser to TRNC Founding President Rauf Denktaş, said: “The United Kingdom is interested in its bases, the bases have become more significant.

He said that any “unofficial” meetings the British held with TRNC figures were “meaningless”.

Mr Olgun accused the UK of adopting a “divide and rule” policy on the island: “Cyprus’s strategic importance has gone up. I think it’s more important than ever… Cyprus’s use by the Americans and the British and the Western allies is not going to go away.

An FCO spokesperson said in a statement to T-VINE: “The UK continues to support appropriate measures aimed at reducing the isolation of the Turkish Cypriot community, while maintaining our commitment to the UN-facilitated settlement process.

“The UK considers bi-communal activities to be an essential part of ending the isolation of the Turkish Cypriot community and continues to fully support these activities.”

The spokesperson added that the EU, with the UK’s support, has spent “significant funds on the economic integration of the island, on improving contacts between the two communities and with the EU, and on preparation of the north for the EU acquis following a Cyprus settlement”

The UK has also “directly funded a range of projects aimed at improving integration on the island and reducing the isolation of the Turkish Cypriot community”, the spokesperson said, and organised events involving Supreme Court judges from “both communities” and continues to provide support through a range of confidence-building measures and other initiatives in the areas of sport and education.