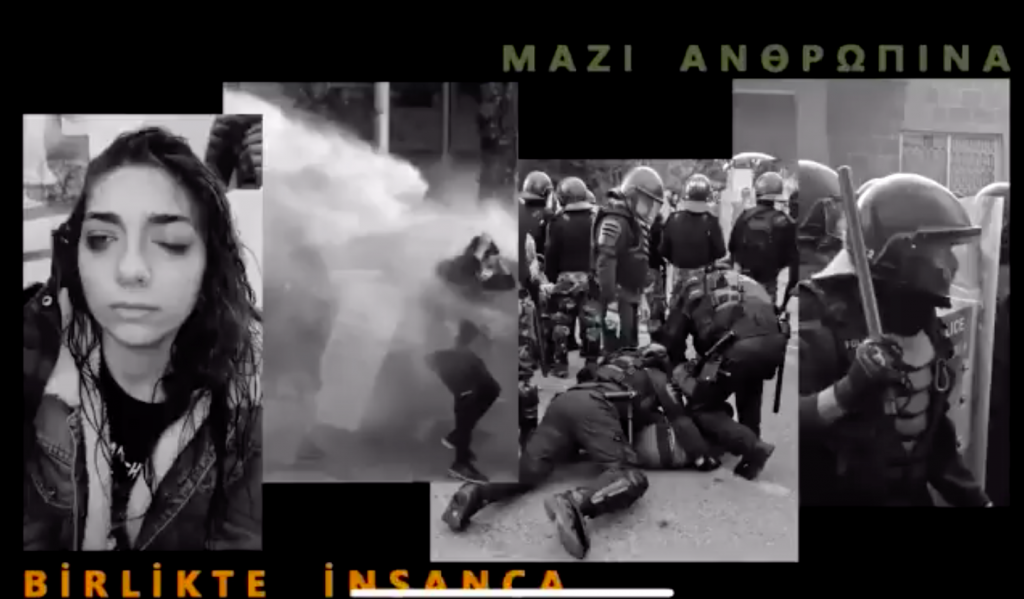 The two minute 18 second clip featured over a dozen Turkish Cypriots speaking in Turkish, English and Greek, each one condemning the ugly scenes that had played out at the first protest on 13 February, where police violently beat protesters, used tear gas, and deployed a water cannon.

Numerous protesters sustained injuries, and one, twenty-five year old Anastasia Demetriadou, was left partially blind in one eye. Surgeons operated on her eye and broken eye socket on Monday, 15 Feb, and it is hoped that she will recover 75% of her vision.

As many as ten thousand people turned out on the streets of South Nicosia on Saturday, 20 Feb, in response to the first protest and to demonstrate against rampant corruption across the Greek Cypriot government, police brutality, and the mismanagement of the coronavirus pandemic.

The protests were sparked by a series of journalistic investigations. The first was conducted by Al Jazeera, which uncovered endemic government corruption surrounding the “Golden Passport” scheme, where people, including wanted criminals, could pay high-level Greek Cypriot officials for citizenship of the Republic of Cyprus, and therefore a prized European Union passport.

A message of #Solidarity from the Turkish Cypriot youth against #police brutality and #corruption in our homeland #Cyprus.#ΩσΔαμε20_2 #TogetherWeCan pic.twitter.com/GM3au33U4k

Further allegations were made by Greek Cypriot journalist Andreas Paraschos, who alleged that the Greek Cypriot President Nicos Anastasiades was personally making as much as €300 million annually from the scheme, which was being hidden in the Seychelles.

Paraschos also verified the claim made by Turkish Foreign Minister Mevlüt Çavuşoğlu that Anastasiades had been advocating a two-state solution to the Cyprus Problem as early as the Crans Montana talks in 2017.

These allegations, in addition to what some perceive to be a poor and overly-authoritarian reaction to the coronavirus pandemic, were the reasons behind the protests.

Saturday’s demonstration was the second consecutive week of protests in South Nicosia, with a vastly increased turnout compared to the first week.

The Greek Cypriot Police declined to comment on specific events regarding the first protest. An announcement that a full enquiry would be conducted into the violent scenes, and use of the water cannon failed to convince many members of the public.

It led to an estimated ten thousand people attending the second protest march, which wound its way through South Nicosia without incident last Saturday, 20 Feb.

Thus far, there has been no comment from Anastasiades or any member of his administration regarding the protests.

South Cyprus will hold Parliamentary Elections on 30 May, and it is believed that the effects of the protests and the unearthing of deep government corruption will be felt at the ballot box.

The latest polls show only a slight dip in support for the main political parties, but with as many as one in five Greek Cypriots undecided who they will vote for, a surprising result may be in order.