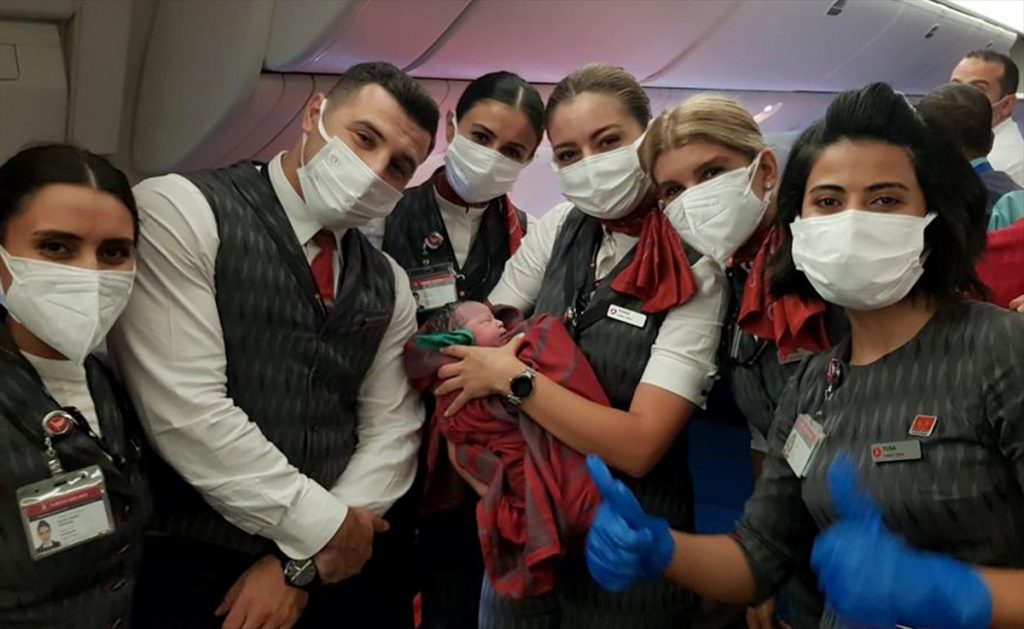 There was drama of a positive kind on a flight taking evacuees from Afghanistan to Birmingham. One of the refugees, 26-year-old Soman Noori, went into labour on a Turkish Airlines flight from Dubai to Birmingham.

The Afghan refugee, who had left Kabul with her husband and two young children the previous day, gave birth to a baby girl 30,000 feet in the air over Kuwaiti airspace.

With no doctor on board, the cabin crew went into action helping the young mum safely give birth. The flight landed in Kuwait as a precautionary measure, and medics deemed mother and baby healthy enough to continue travelling to the UK.

The baby girl has been named Havva, which translates as Eve in English. Photos and video showed Turkish Airlines crew cradling the baby before handing her to her mother.

The evacuation flight eventually landed in Birmingham at 11.45am on Saturday, 28 August.

On the same day, Turkey completed its evacuation of Turkish military personnel and citizens from Afghanistan. Turkey’s Defence Minister Hulusi Akar said the entire process had taken less than 48 hours.

Mr Akar, who was present at a welcoming ceremony in the capital Ankara on Saturday for troops returning from Afghanistan, explained that the evacuation was carried out via an air bridge between Kabul and Pakistan’s capital Islamabad. Eight airplanes and two helicopters were used in the mission.

Turkey’s early evacuation ensured it complied with the Taliban’s demand for all foreign forces to leave the country by 31 August.

Around 500 Turkish non-combat troops had been stationed in Afghanistan, one of many international forces present in Kabul, including a unit from Azerbaijan. In their final weeks in the country, Turkish and Azerbaijani troops assisted with the evacuation of Afghans wanting to flee Taliban rule.

The Defence Minister stated that Turkey was closely monitoring developments in the war-torn country, and had drawn up contingency plans to deal with a range of risks and threats that could arise.

UK, US in regular contact with Turkish FM Mevlüt Çavuşoğlu

There had been talks that Turkish troops would remain in Kabul after the US and British forces left to help protect Hamid Karzai International Airport in Kabul. Those plans appear to have fallen by the wayside. However, Turkey remains in contact with Taliban leaders.

“It is important for Afghanistan to stabilise,” Turkish President Recep Tayyip Erdoğan said last week as the Turkish troop withdrawal was announced.

“Turkey will continue to be in close dialogue with all parties in Afghanistan in line with this goal,” the president added.

I spoke to Turkish FM @MevlutCavusoglu 🇹🇷 again about the security situation and strategic priorities on Afghanistan. We will work closely with Turkey and international partners to safeguard regional stability and respond to the humanitarian situation.

Both the British Foreign Secretary Dominic Raab and his American counterpart, Secretary of State Antony Blinken, have been in regular contact with Turkish Foreign Minister Mevlüt Çavuşoğlu about the latest developments in Afghanistan.

On Thursday, the Foreign Secretary tweeted: “I spoke to Turkish FM Mevlut Cavusoglu again about the security situation and strategic priorities on Afghanistan. We will work closely with Turkey and international partners to safeguard regional stability and respond to the humanitarian situation.”

Turkish Foreign Minister @MevlutCavusoglu and I spoke again today about our continuing joint efforts to ensure a safe and orderly evacuation from Afghanistan. Turkey is an important NATO Ally and we’re grateful for its partnership.

Two days later, Blinken tweeted: “Turkish Foreign Minister Mevlut Cavusoglu and I spoke again today about our continuing joint efforts to ensure a safe and orderly evacuation from Afghanistan. Turkey is an important NATO Ally and we’re grateful for its partnership.”

Mr Çavuşoğlu also met with German Foreign Minister Heiko Maas, who was in Turkey for talks about Afghanistan at the weekend.