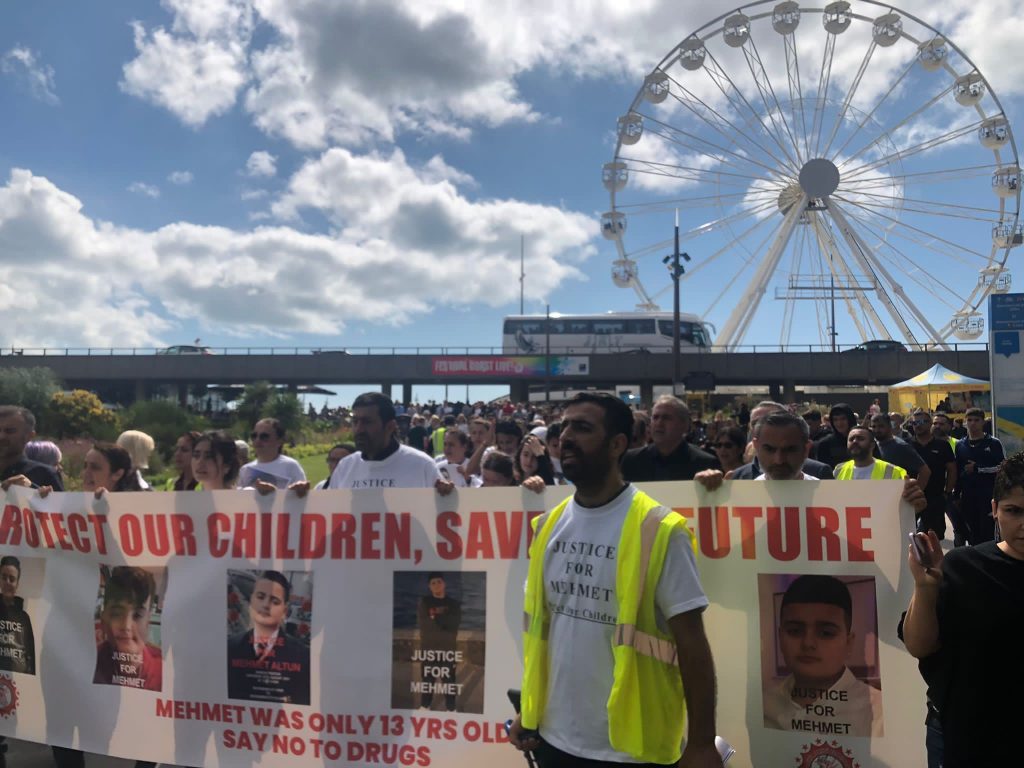 Hundreds of people turned out for a peaceful protest in Bournemouth to demand justice following the tragic death of Mehmet Altun. The young boy, just thirteen years of age, died on 19 August from a suspected drugs overdose.

Mehmet’s family, of Turkish Alevi origin from Sarız, a town in Kayseri, central Turkey, were joined by local people and Alevis who had travelled from all over the country to offer them support and solidarity.

Among those present were Israfil Erbil, President of the British Alevi Federation whose powerful speech is given in full below, Councillor and former Enfield Mayor Saray Karakuş, and Bournemouth Councillors Duane Farr and Laurence Fear.

People assembled at Bournemouth Pier at midday, before peacefully walking to the town centre, a couple of miles away, where a variety of people including Mehmet’s mother gave speeches at Bournemouth Square.

Protestors held up photos of Mehmet, many with the message “Justice for Mehmet”. Others had hand-made placards that read: “Protect Our Youth”, “Protect+ Educate The Youth”, and “Stop Drugs”, or posed important questions, including, “How did deadly drugs get to a 13 year old boy?”

At the head of the march, people held a huge banner with the slogan: “Protect Our Children. Save Our Future”.

Both councillors are from the Conservative Party and represent the Kinson ward on Bournemouth, Christchurch and Poole (BCP) Council. Cllr Farr is a member of the Crime Prevention Panel for North Bournemouth, while Cllr Fear is Vice-Chair of BCP Council.

At Bournemouth Square, Mehmet’s mother Aynur Altun made an emotional plea in Turkish for children to stay away from drugs, and for them to listen to their parents.

“[Mehmet] can’t go to university, he won’t have a future. His dreams never stopped, they were unceasing, but now they’ve ended. Those without any conscience have ended them. Please children, I’m begging you…please use Mehmet as an example…My son was 13 years old. 13! A child! An infant…

“Don’t forget Mehmet. Mehmet had a future. Maybe if he had lived he would have wanted to share these things with everyone. But he’s not here. There’s no Mehmet. No dreams. He has no future. Listen, hear my voice children.”

Mrs Altun asked people to translate into English for her, emphatically stating “no mother and father wants their child to be bad or to fall into a bad state,” while urging children to tell their parents their concerns, “tell everything to your mum and dad” assuring them that “No one can scare you, they can’t do anything to you.”

Mr Erbil echoed the distraught mother’s words, stating: “Mehmet was an innocent child, whose future life was taken from him.”

He started his 3-minute talk, themed “Protect our children”, with a few words in Turkish:

“What we have heard is the scream of a mother. If we are to save our children, it will be through the screams of mothers,” going on to highlight in English the collective failure of society in allowing children to die from drugs.

“It’s not just the drug barons that are responsible for his death; all us adults, the police force, schools, the local authorities and the government are all just as responsible.”

The British Alevi leader called on the authorities to explain how a 13-year-old boy came to take drugs, and how it was possible for a 14-year-old boy to be supply them, and who was supplying children with drugs, demanding “immediate answers to these questions!”

An investigation is already underway into the events leading up to the tragic death of Mehmet Altun, with Dorset Police appealing to people to come forward with any information.

Speech given by Israfil Erbil, President of the British Alevi Federation

“On 19th August the Altun family, the community of Bournemouth, and the Alevi community of Britain, lost a son. Mehmet Altun, a 13-year-old boy, tragically overdosed after consuming illegal substances.

This is not a one off event and we continue to hear how drugs detrimentally effect young people all over the country. What will the authorities do in the long term to ensure this does not happen again?

Mehmet was an innocent child, whose future life was taken from him.

It’s not just the drug barons that are responsible for his death; all us adults, the police force, schools, the local authorities and the government are all just as responsible.

Today, we aim to raise awareness regarding the dangers of deadly drugs and illegal substances. We are calling on the Dorset Police, local authorities, elected representatives and the community to support us in our fight to tackle the supply of illegal drugs.

This is not a problem faced only by Bournemouth. Across the UK and all around the world, communities have lost young members to drugs. We are working hard to keep gangs and drugs out of our communities. But this is not a fight we can win alone!

We are fully aware that there is financial gain from drugs, for certain groups. However, we are here to say that no amount of money will replace the young people that we have lost to drugs.

Poverty, limited education and social marginalisation remain major factors increasing the risk of drug use disorders. Vulnerable and marginalised groups face barriers to getting treatment due to discrimination and stigma.

The UK Government must urgently invest in social services and public services which will raise awareness on this important issue. The youth of the UK must have access to free youth services that will keep them away from drugs and drugs away from them.

Furthermore, the UK Government must urgently invest in policing and enforcement to ensure community safety and security are protected.

The authorities have immediate questions to answer:

We demand immediate answers to these questions!

This danger experienced by Mehmet, at the age of 13, can sadly happen to anyone’s child in the UK. We demand urgent measures to be taken and all authorities to do their duty in protecting young people.

Today it is important to call out to all children and young people,

A child’s death at any age and from any cause is a profound loss. This is made worse when illegal substances and drugs supply are involved.

Mehmet, may your cycle of life last forever.