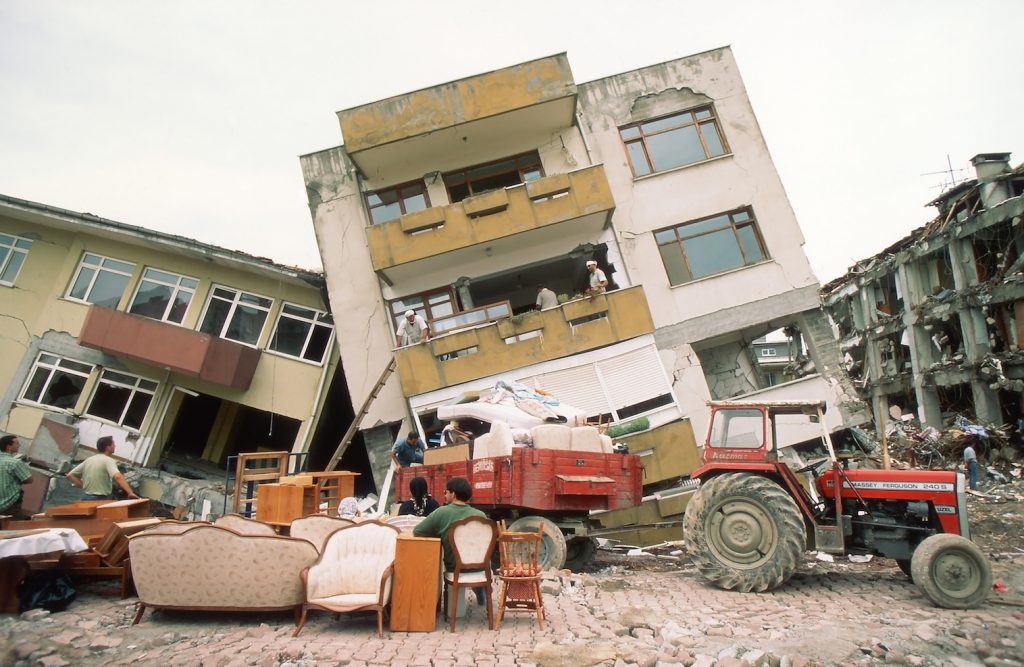 Turkey will this weekend mark the 20thanniversary of an earthquake that claimed the lives of more than 17,000 people and caused widespread destruction.

Ceremonies are expected to be held and prayers said to remember those who lost their lives when disaster struck in the Marmara region just after 3am on 17 August, 1999.

The 45-second long quake, measuring 7.4 on the Richter scale, hit the north-western region of Turkey, bringing devastation to parts of Gölcük – the epicentre – Düzce, Kocaeli, Bursa, Sakarya, Yalova and Istanbul, affecting an area home to millions of people. It created a 2.5-metre high tsunami in the Sea of Marmara which claimed 155 lives.

Figures showed that 44,000 people were injured and 200,000 left homeless as almost 80,000 buildings collapsed and more than 300,000 were damaged. They included the Turkish Navy headquarters in Gölcük and the Tüpraş oil refinery in İzmit, where a huge blaze erupted.

International aid agencies rushed to join rescue efforts led by the Turkish Red Crescent and the Turkish Army. They included search and rescue teams from neighbouring Greece, leading to a thaw in tensions between the two countries. The assistance provided by Greece was reciprocated just weeks later when an earthquake hit Athens.

The casualty count in the Turkish quake – made worse because it had occurred while many people were sound asleep – led to a public outcry against private property developers accused of shoddy workmanship and of using cheap materials and against government and local officials for failing to enforce building regulations.

The earthquake, one of the world’s worst of the 20th Century, caused an economic hit to the Turkish economy of an estimated $20 billion, according to the Emergency Events Database’s website.

Turkey’s vulnerability to such natural disasters was highlighted as recently as Thursday, 8 August, when an earthquake hit Bozkurt in the province of Denizli in the western part of the country. Turkey’s Disaster and Emergency Management Authority (AFAD) said the quake struck at 2.25pm local time with a preliminary magnitude of 6.0.

71% of the population of Turkey lives in earthquake zones

Bozkurt Mayor Birsen Çelik said the it knocked down two houses in the town and damaged several other homes.

“The earthquake lasted more than 15 or 20 seconds,” she said. “Several houses have been damaged, roofs have caved in and there are deep cracks in walls.

“Thank God, despite the fact that one or two houses collapsed, there were no cases of death or serious injury.”

Turkey’s Environment and Urbanisation Minister Murat Kurum vowed to rebuild 250 homes and two mosques that were damaged, following a visit to the affected areas.

“TOKİ [state-backed housing agency] has been instructed to start rebuilding work in order to heal the wounds of the people as soon as possible,” the minister was quoted as telling reporters.

“These earthquakes once again showed us how essential urban transformation is,” he said, adding that 71 per cent of the population of Turkey lives in earthquake zones.

The minister went on to say that there are still 6.7 million buildings waiting to be “renewed” at a rate of 300,000 buildings per year.

Turkey ranks third in the world in terms of earthquake-related casualties and eighth with regard to the total number of people affected according to AFAD, which was established following the 1999 earthquake.

“Every year, the country experiences at least one 5+ magnitude earthquake – which renders the proper management and coordination of disasters absolutely crucial,” it says on its website.

“The 1999 Marmara earthquake marked the turning point in the area of disaster management and coordination.

“This devastating disaster clearly demonstrated the need to reform disaster management and compelled the country to establish a single government institution to single-handedly coordinate and exercise legal authority in cases of disaster and emergencies.”