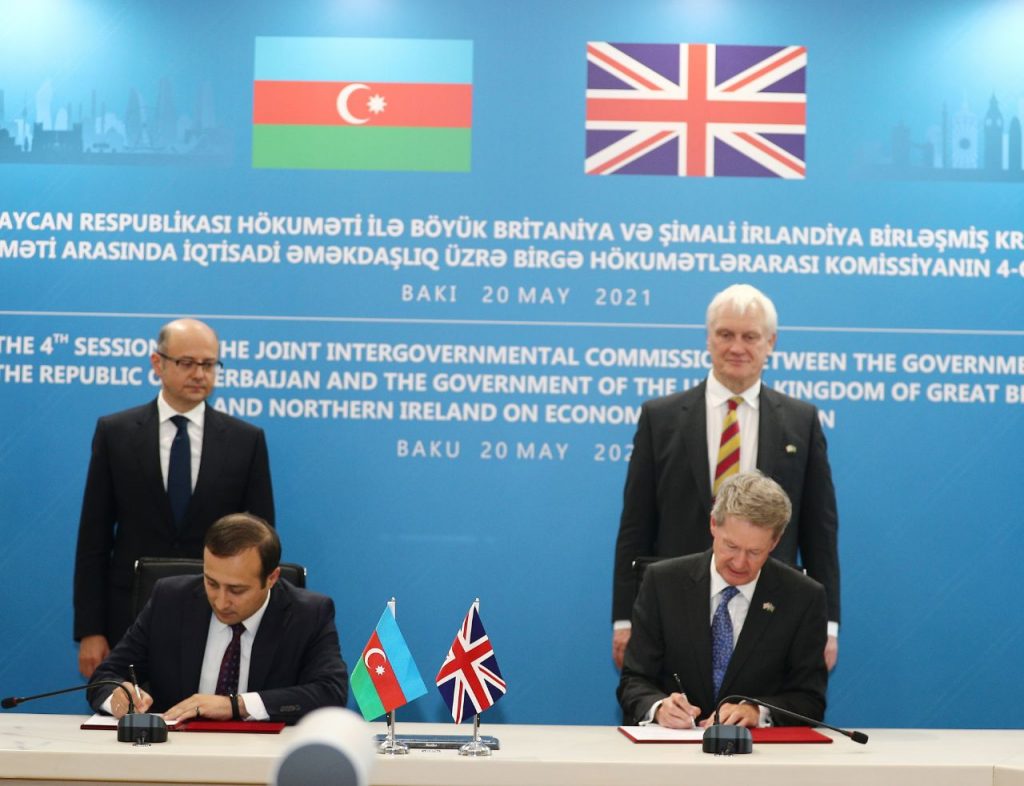 Brexit has created new opportunities for the UK and Azerbaijan, a leading Azerbaijani MP has said.

“In my opinion, leaving the EU opened new perspectives for our mutual cooperation. After Brexit the UK is not limited any more in any way of cooperation with the world, including Azerbaijan” Javanshir Feyziyev, the Head of Azerbaijan-UK Interparliamentary Relations told T-VINE after meetings in Baku.

The MP explained that Azerbaijan’s efforts to diversify its economy and develop state infrastructure have opened up new areas for expanded collaboration with the UK, saying, “Currently industrialisation, agriculture and tourism are rapidly developing sectors of our economy. The production of modern products based on the latest green technologies intended for export is our priority for economic development.

“The system of national education also needs deep rational reforms, where the experience of the British education system could be extremely useful. All of these offer a wide spectrum of cooperation, which is welcomed by the Azerbaijani government.”

When contacted for comment, a UK Government spokesperson told T-VINE:

“The UK maintains a strong, close relationship with Azerbaijan, currently supporting reform efforts in various sectors of the Azerbaijani economy. We have been the single largest foreign investor in the country for many years.

“Our ministers meet regularly with Azerbaijan to discuss issues from trade and the economy to climate change, the importance of civil society, human rights and gender equality.”

Today, the United Kingdom🇬🇧 leaves the European Union and we are determined that relations with Azerbaijan will strengthen further. #brexit

The UK first recognised Azerbaijan as an independent state on 31 December 1991, amid the collapse of the USSR. Formal diplomatic relations between the two countries would follow in March 1992.

Owing to Azerbaijan’s strategic location, British forces also once maintained a presence in the country between 1918-1920, around the end of the First World War, which coincided with the short-lived Azerbaijan Democratic Republic before it fell to the Red Army and was absorbed by the Soviet Union.

According to Mr Feyziyev, since his country’s independence, “The UK was one of the first western countries who extremely accurately assessed investment opportunities and prospects for cooperation with Azerbaijan, starting from the early phases of our independence.

“The first large project between our countries, known as the “Contract of the Century”, was launched in 1994 and focused on Caspian oil and gas exploration.”

The country also benefited from advanced British scientific and technological capabilities ahead of other post-Soviet states, as well as business organisation and management knowledge.

According to UK figures, over 400 British companies and around 4,000 British nationals are present within the country.

Recent political contacts have included visits to Azerbaijan from the UK’s Minister for European Neighbourhood and the Americas Wendy Morton last February, and the Department of International Trade Minister for Exports Graham Stuart in May. The Azerbaijani President Ilham Aliyev also visited London in 2018 at the invitation of the then Prime Minister Theresa May.

Going forward, the UK has also already offered to share its expertise in tax, customs and environmental matters to enhance Azerbaijan as a business environment, and is keen to expand cooperation in these areas. London is also committed to transitioning the trading relationship between the two countries from the EU-Azerbaijan Partnership and Cooperation Agreement into their own bilateral deal.

Britain could also find new business opportunities as Azerbaijan re-builds in its territories affected by the Nagorno-Karabakh conflict with neighbouring Armenia.

The conflict dates back to the breakup of the Soviet Union, when fighting broke out between Azerbaijani forces and Armenian secessionists pushing for Nagorno-Karabakh, an autonomous, Armenian-majority enclave within the Azerbaijan Soviet Socialist Republic to unite with Armenia.

The region, which is home to the city of Shusha, viewed by many Azerbaijanis as the “cradle of Azerbaijani culture,” later became the object of a full-scale war between the two states after independence.

The war raged until a ceasefire in 1994 left all of the Nagorno-Karabakh region and seven surrounding Azeri-majority areas either partially or entirely under Armenian control, administered by the self-declared Republic of Artsakh.

The breakaway state is not recognised by any other countries including Armenia, but is backed by Yerevan. The UN on the other hand, recognises Nagorno-Karabakh and the surrounding seven territories as belonging to Azerbaijan.

The war has seen thousands of casualties on either side, with many more people, including Azeris living in Armenia, and Armenians living within Azerbaijan having fled their homes, becoming refugees.

Floods of Azerbaijanis from within Nagorno-Karabakh and the adjacent areas also became internally displaced persons (IDPs) in the lead up to the first ceasefire in 1994. The number at the time stood at around 600,000 according to the International Crisis Group.

After intermittent outbreaks of fighting since the mid-90s, the tide of the conflict turned last year during a 44-day war in which Azerbaijan regained parts of Nagorno-Karabakh including Shusha, and the entirety of the seven surrounding regions either through military means, or as part of the diplomatic settlement. A Russian-led peace keeping force now maintains a presence in the region.

Re-construction and re-development works have begun in the territories, and the UK has provided support to Azerbaijani landmine removal projects in Agdam province, which was partially held by Armenian forces until last November.

The province’s main city and namesake was effectively levelled while under the control of the Artsakh Republic. Despite having been desecrated and allegedly used as a barn for pigs and cows during the occupation, Agdam’s historic Juma Mosque, built between 1868-1870, is the only building still standing.

In June this year, the Azerbaijani Government announced ambitious plans to renovate and re-build the area with a focus on sustainability and making it a low emission smart city.

This week our UK MOD Counter Explosives expert and @ANAMA_gov_az colleagues surveyed parts of Fuzuli affected by land mines. The aim is to understand how the UK could work with Azerbaijan to tackle the threat from these deadly devices. 🇬🇧🤝🇦🇿 pic.twitter.com/kgBPpP9no6

Speaking at an event in the ruins of Agdam, the Assistant to Azerbaijani President Ilham Aliyev, Mr Hikmat Hajiyev who was present at the event, told a T-VINE reporter:

“Agdam was one of the vibrant and prosperous cities of Azerbaijan before the occupation, but what we can see in Agdam is complete destruction. Whenever we Azerbaijanis visit Agdam we have mixed feelings. On one side, we are proud that we are back, and it’s the end of the occupation, but from another side we can see destruction and vandalism have been committed to this vibrant city of 30,000 population, not only Agdam, but the entire Agdam region of Azerbaijan that accommodated more than 100,000 people.”

At the event, officials showcased reconstruction plans with an exhibition that included the logos of both local and foreign participating companies. The British engineering consultancy firm Atkins, who opened a Baku office in 2016 were among those on display, as well as companies from other countries such as Germany, the US, Canada, and Turkey.

When asked about future opportunities for British firms in and around Nagorno-Karabakh, Mr Feyziyev said, “The liberated territories have been announced as a “green zone”, which means all infrastructure in those areas will be restored on the basis of ecological, healthy technologies.

“We are aware that British companies are going to invest in alternative energy projects in the liberated areas which is very welcomed by the government. The agenda of restoration of these territories is much wider, as eventually the IDPs must go back to their native lands to live.

“All infrastructure projects, as well as the construction of all public and residency buildings in the liberated areas are open to bid and I am sure British companies will not miss their opportunities to participate.”

He also added that the reconstruction projects “are based on new innovative and advanced technologies where the UK has great experience, as well as modern ‘know-how’.”

“For example, the Karabakh territories have the potential to generate up to 4,000 MWT of solar and 500 MWT of wind energy, which will allow the implementation of smart cities and smart villages in the liberated areas based on alternative energy,” the Azerbaijani MP explained before adding, “I believe the UK’s energy generation experience can be particularly helpful and mutually beneficial in these projects.”

UK PM Trade Envoy @Baroness_Nichol had a warm and productive meeting with President Aliyev. As Baku is one of host cities for #EURO2020 and 2games of #Wales, she presented President Aliyev Wales team shirt and wished every success in hosting the tournament. @presidentaz @FAWales pic.twitter.com/f0hUEIT5gw

The empowerment and return of Azerbaijani IDPs could also present new areas of cooperation between Azerbaijan and the UK in terms of education and small business development.

Following a meeting on the situation of Azerbaijani IDPs, when asked by T-VINE, Rovshan Rzayev, Chairman of the Azerbaijan State Committee for Affairs of Refugees and Internally Displaced Persons said,

“It’s indeed very important for us that they (the UK) express their views on the reconstruction of the cities and towns.

“For example, for me, it would be very interesting to have an exchange of views regarding the relocation [of the IDPs in their home regions]. Also, I am very interested in education related issues, and SME development is most interesting for me for the young generation, the young IDPs, to show them how they can develop themselves how they can be engaged.”