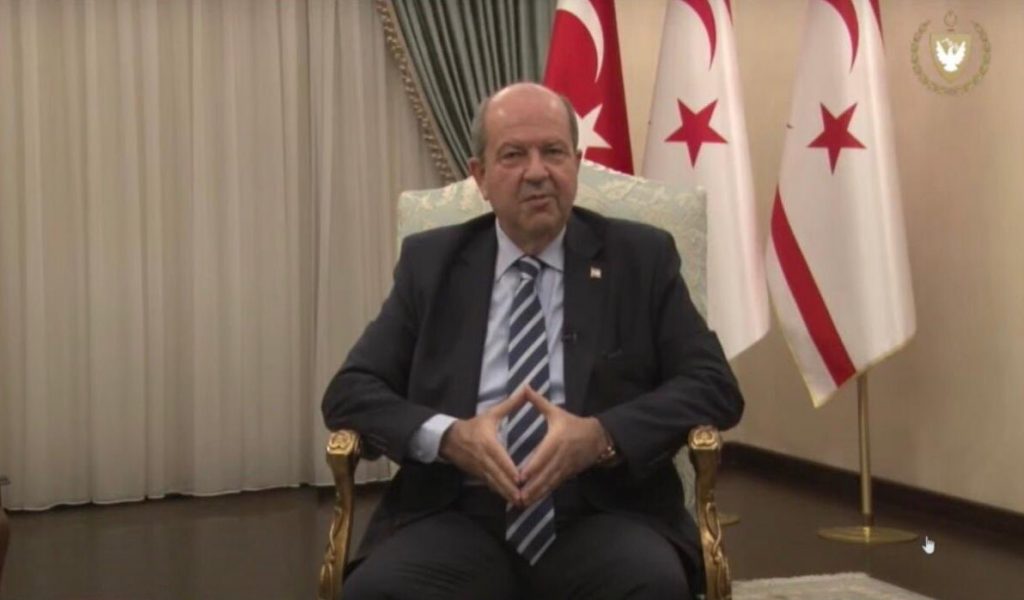 Ersin Tatar, the president of the Turkish Republic of North Cyprus, has asserted the need for separate sovereignty for Turkish Cypriots to help resolve the decades old Cyprus Problem.

“We share our main policy, the two-state solution, with the whole world. What is this? This is a matter of sovereignty. We no longer want to share our sovereignty,” said President Tatar.

Retired judge Erginel underlined the importance of recognising the current realities on the island, and that two separate states already exist, arguing that the status quo is forcing Turkish Cypriots further into the arms of Turkey.

“We must act at once to have the TRNC be acknowledged [as a state globally]…Either you recognise this state, or we will become an autonomous region of the Republic of Turkey.”

Tamcelik pointed to the decades of failed talks to find a federal solution, and said the focus was now on protecting the existence and rights of Turkish Cypriots on the island, and ending their international isolation.

The former political advisor argued for the immediate lifting of sanctions on the TRNC, so that its air and sea borders are open for trade, and the need for the TRNC to be integrated into the international system.

International relations expert Işıksal also highlighted the risks of the unresolved political conflict on the island, claiming “The current status quo is unacceptable and harms both sides,” adding that “If any side gains the upper hand over the political arrangement in Cyprus, it will worsen the already existing instability in the region.”

Işıksal said it was “inevitable” that Turkish Cypriots would gain their legal status .

The two hour long event in Turkish is available to view online via the YTB’s YouTube channel.

A former British colony, Cyprus gained its independence in 1960 as a power-sharing republic between Greek and Turkish Cypriots. It only lasted three years, as the more numerous Greek Cypriots sought to downgrade the political equality of Turkish Cypriots, but when this was resisted, Greek Cypriots launched a bloody coup and took over the state in December 1963 and have ruled under a ‘doctrine of necessity’ ever since.

The Greek Cypriots were inadvertently recognised as the legitimate government of the Republic of Cyprus in a badly worded UN Resolution on 4 March 1964, removing any incentive for them to share power with Turkish Cypriots since.

In 1974, Turkey, one of three guarantor powers in Cyprus, intervened in response to a new Athens-backed coup that aimed to annex the island to Greece and that threatened to annihilate the already brutalised Turkish Cypriot population. The Turkish army’s response was to create two ethnic zones for each community, a Turkish North and a Greek South.

Greek Cypriots have repeatedly rejected plans for a federal solution

While the two sides, and the UN and international community have all accepted the formula of a bi-zonal, bi-communal federation with a single international personality and shared sovereignty, Greek Cypriots have repeatedly rejected all settlement plans presented to them.

The most recent efforts by the UN to reunite the island collapsed spectacularly at Crans Montana in 2017, when the Greek Cypriot leader Nicos Anastasiades also rejected the terms of a peace deal. Many claimed at the time that this was the last chance for a federal solution.

The Greek South continues to enjoy full international recognition, while the Turkish North – declared the TRNC in 1983 – remains outside the international community due to UN Resolutions calling for non-recognition of the Turkish Cypriot state. It means the TRNC cannot function normally, with political relations, direct trade, transport and communications all barred or taking place via Turkey.

Ersin Tatar, of the conservative National Unity Party (UBP) won the TRNC Presidential Election in October 2020 on a promise to promote a two-state solution.