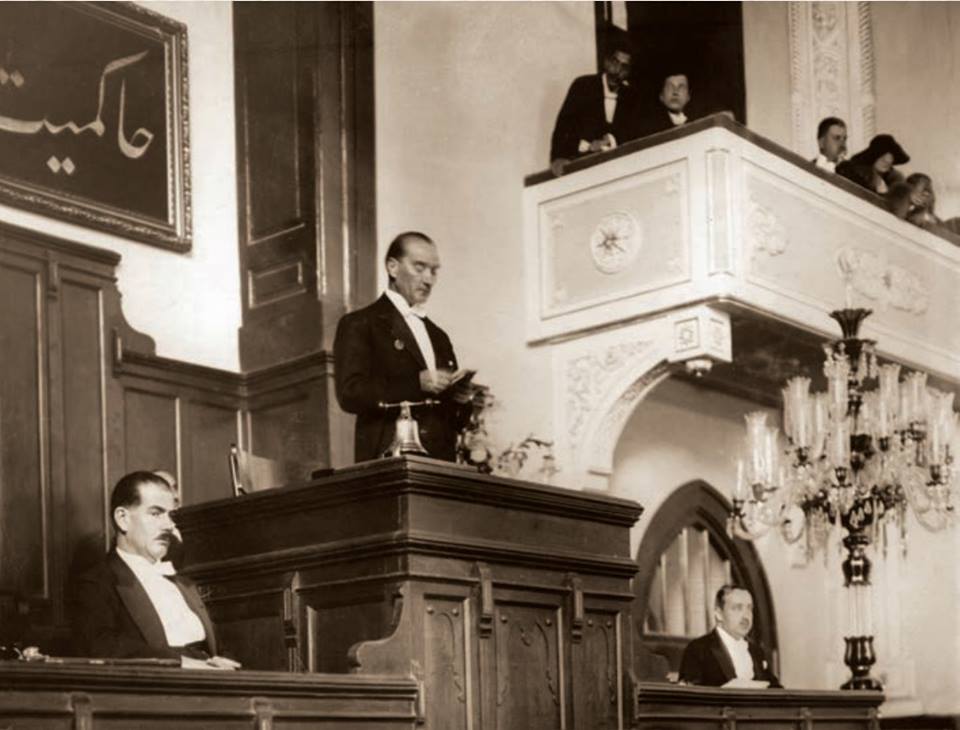 Today, 93 years ago on 3 March 1924, under the leadership of President Mustafa Kemal Atatürk, Turkey’s Grand National Assembly passed three bills that would change the country irreversibly. Of these, the first abolished the Ministry of Religious Law and Pious Foundations, the second established a single education system, and the third—the most revolutionary of all—abolished the caliphate and exiled the Ottoman Dynasty from the Turkish Republic. The Ottoman Sultanate had already been dissolved in 1922.

The early Republic had completely overhauled the Islamic structures that had been closely intertwined with the Ottoman Government for as long as anyone could remember. Alongside ending the caliphate, religious law courts and the office of Şeyhülislam, who was head of the Islamic legal and clerical establishment, were abolished as well. Islamic schools, known as medreses were also axed by the second law, which saw the government unify and thereby assume total control of education.

Mustafa Kemal built upon these changes during his Presidency. The included the closure and forbidding of religious orders – or cults – known as tarikats, particularly from 1925, after the suppression of a revolt led by Şeyh Sait, a Kurdish spiritual leader from the country’s South East. Atatürk had long associated these orders with reactionary notions, such as superstition, that ran counter to the logic and reason of the modern age. By forbidding these orders, as he put it in his famous 1927 Speech, he was freeing his people from being “led by the nose by a herd of Şeyhs, Dedes, Seyyits, Çelebis, Babas and Emirs; who entrusted their destiny and their lives to palm readers, magicians, dice throwers and amulet sellers”.

Later on in 1932, he also introduced two more striking and innovative religious reforms. These included the translation from Arabic into Turkish of both the call to prayer or ezan and the Koran. It was in an Istanbul mosque on 22 January that year that a Koranic passage was recited for the first time in Turkish.

In one swoop, Atatürk had undone the old religious order and in its place, he established the Directorate of Religious Affairs, commonly referred to today as Diyanet. As under the Sultanate, religion remained subordinate to the government, enabling Atatürk to marginalise its role within the state.

The President had different reasons for doing this. In the short term, he had to protect his position politically. As the Turkish Republic was not yet even a year old in March 1924, the new order he was trying to create was threatened by the old. Indeed while he was leading the Turkish forces during the 1919-1922 War of Independence – or National Struggle – against the Greeks and others, Atatürk had used religiously-charged rhetoric and slogans to galvanise his own forces and was acutely aware that the same could be done to him.

During the war, the office of Şeyhülislam and with it the Ottoman Government in Istanbul had also denounced Atatürk and his comrades as heretical non-Muslims and called upon “true believers” to fight against them. Moreover, if the head of the clerical establishment presented such a danger, then the Ottoman Caliph Abdülmecid, though no longer sultan, as the leader and figurehead of Sunni Islam was far more dangerous to him.

With the Republic in such formative stages, Atatürk remained wary of the old guard and it was through abolishing these institutions that he dissolved their threat.

Beyond securing his own position however, Atatürk’s actions were also part of a far higher and further-reaching vision. His grand nation-building plan for Turkey and its many sweeping reforms would be supported by the new directorate that had replaced the caliphate and other Ottoman institutions.

Mustafa Kemal planned to build a new Turkish nation from the ashes of the Ottoman Empire that would reach the standards of a secular, modern Western state or, as he put it, “Contemporary Civilisation.” In pursuing this goal, he sought to wipe out vestiges of the past that were informed by religious institutions and interpretations that he deemed regressive. Through the Directorate, he promoted an understanding that Western values and societal progress were compatible with Islam.

His plan to do just this is suggested by a speech he gave in a mosque prior to the reforms in 1923, in which he stated: “To recite sermons of a hundred, two hundred or even a thousand years ago is to leave the people in a state of ignorance and negligence. … Therefore sermons should and will be … suitable to the requirements of the day.”

The Directorate, which controlled the content of sermons given by imams in Turkey’s mosques, worked to ensure just this, instrumentalising state-sanctioned Sunni Islam to promote Atatürk’s modernising project.

A prominent example comes from one of the most famous of Atatürk’s reforms: the 1925 Hat Law, which forbade Turkish citizens from wearing the fez – official Ottoman headwear. The fez was condemned by the Government as an outdated symbol of Oriental cultural identity, far removed from the modern Westerner they were trying to emulate.

In January 1926 the Directorate sent a message to all mosques stating that to wear a Western-style hat inside mosque buildings was not out of keeping with Islamic law, and therefore that pious believers could replace their fezzes with such hats without compromising their faith.

Both the abolition of the caliphate and subsequent establishment of the Directorate show the progressive role that Mustafa Kemal had planned for Islam to play in shaping his new secular Turkish nation-state. Contradictory though it was to have a government body controlling religious output, this served Atatürk’s purpose in helping to divorce Islam from the day-to-day running of the republic.

Crucially though, while Islam was side-lined at the government level, Atatürk’s religious reforms, such as translating the Koran into the country’s mother tongue empowered ordinary Turks to have a deeper understanding of their faith and a direct relationship with God.