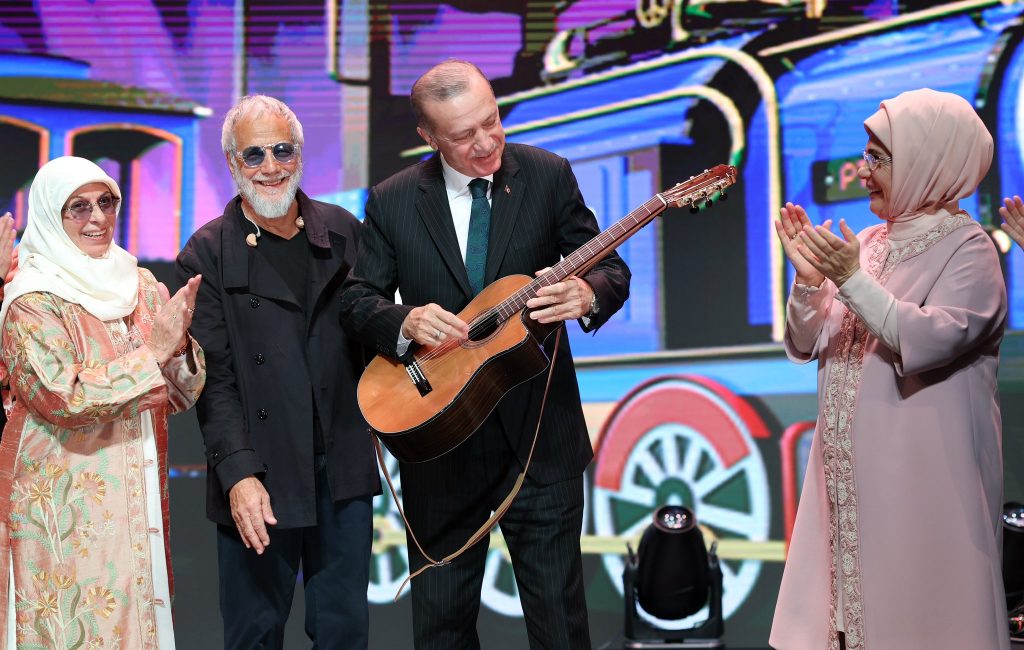 Last week, Turkiye welcomed one of music’s most iconic stars, singer-songwriter Yusuf Islam. The artist was performing a series of a fundraising concerts in Istanbul and Ankara, with President, Recep Tayyip Erdoğan, and his wife, First Lady Emine Erdoğan attending the event in the Turkish capital.

During the Ankara concert, the 74-year-old British star, who is of mixed heritage through his Greek Cypriot father and Swedish mother, gave a short talk, in which he asked the Turkish President not to “give up on trying to find a peaceful solution for my fatherland, which is Cyprus, insAllah.”

Islam, who before converting to Islam went by the stage name of Cat Stevens, was making his debut performance in Turkiye. He took to the stage at AKM Türk Telekom Opera Salonu in Istanbul on 19 October as part of the Beyoğlu Culture Road Festival, followed by a concert at the CSO Ada Ana Salon in Ankara on 23 October, for the Başkent Culture Road Festival.

The proceeds from both concerts will be donated to the star’s charity “Peace Train,” which supports disadvantaged communities around the world through food aid, access to water and other construction projects to improve their lives.

In a short address at the Ankara gig to the Turkish president, who was seated in the front row, Yusuf Islam said:

“Mr President, I would again like to thank you so much for your fantastic, generous support to British Muslims and the building of the Cambridge Mosque in the UK. And also to commend your fantastic work in trying to bring, to open the blockages between Ukraine and Russia.

“And I would request that you don’t give up on trying to find a peaceful solution for my fatherland, which is Cyprus, insAllah. And to continue your valuable support for the Palestinian liberties, insAllah, so that all may live in peace in the Holy Land.”

The superstar, whose music was one of the defining sounds of the 1970s, gifted the Turkish leader a guitar, and the pair and their wives posed together for photos.

After the Ankara concert, the First Lady shared the photos with this message on Twitter:

“We are extremely pleased to have hosted world-famous musician Yusuf Islam and his family in our country. He touched our hearts with his artwork reflected through the universal language of music,” tweeted the First Lady, adding that they had been “fascinated” by Islam’s song that was inspired by thirteenth century Turkish folk poet Yunus Emre.

In March of this year, Turkiye’s Diyanet (Presidency of Religious Affairs) awarded Islam its International Benevolence Award for his Peace Train charity work. The organisation is named after a Cat Stevens song of the same name that was released to critical acclaim back in 1971.

Born in London on 21 July 1948 as Steven Demetre Georgiou, Islam has enjoyed a long career in music, hitting fame in the 60s and 70s with tracks such as Wild World, Morning Has Broken, Father and Son, and Hard-Headed Woman, which fused folk, rock and country music.

He learned to play the piano as a child, before picking up a guitar at the age of 15, when he also started to write songs.

He converted to Islam in 1977 after nearly drowning in the Pacific Ocean while swimming off Malibu Beach. He has devoted much of his life since to philanthropic causes since, with a special focus on Muslim communities across the world.