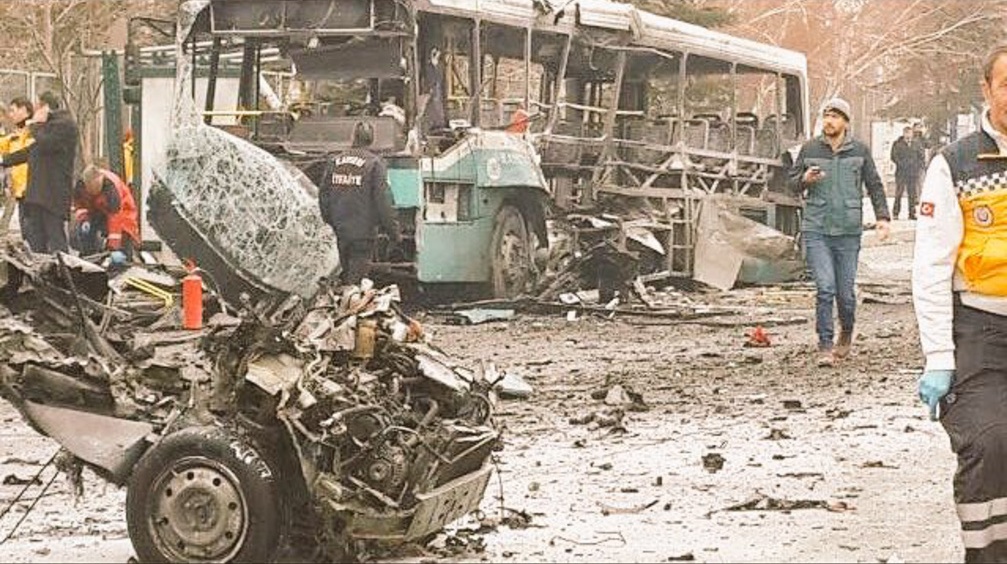 A car laden with explosives crashed into a municipality bus carrying off-duty soldiers and civilians, killing 13 and injuring 56 in central Turkey.

The attack took place at 8.45am local time this morning, just as the bus was by a bus stop that serves Kayseri’s Erciyes University campus, adding to the casualty toll.

Turkey’s Interior Minister Süleyman Soylu said 12 of the wounded were in intensive care, with four in a critical condition.

All of Turkey’s political parties have condemned the attack, as have various embassies and representatives from governments from around the world. They include the US Embassy, which took to Twitter to say, “No cause could justify such heinous acts”.

However, dozens of Turks replied questioning the sincerity of the message given the American government co-operates with and arms the PKK’s Syrian wing, the PYD and YPG.

We condemn the terrorist attack in Kayseri. No cause could justify such heinous acts.

Russian foreign minister Sergey Lavrov was among those to offer his condolences over the terrorist attack, calling his Turkish counterpart Mevlüt Çavuşoğlu.

An investigation into the attack is underway, with suspect falling on TAK – an offshoot of terror group the Kurdistan Workers’ Party (PKK).

Turkey is facing multiple terror threats from the PKK and TAK, as well as Daesh, and militant Marxist group DHKP-C, which have killed thousands of soldiers, police officers and civilians in the past 18 months. The country has been under a State of Emergency following the attempted coup of 15 July.