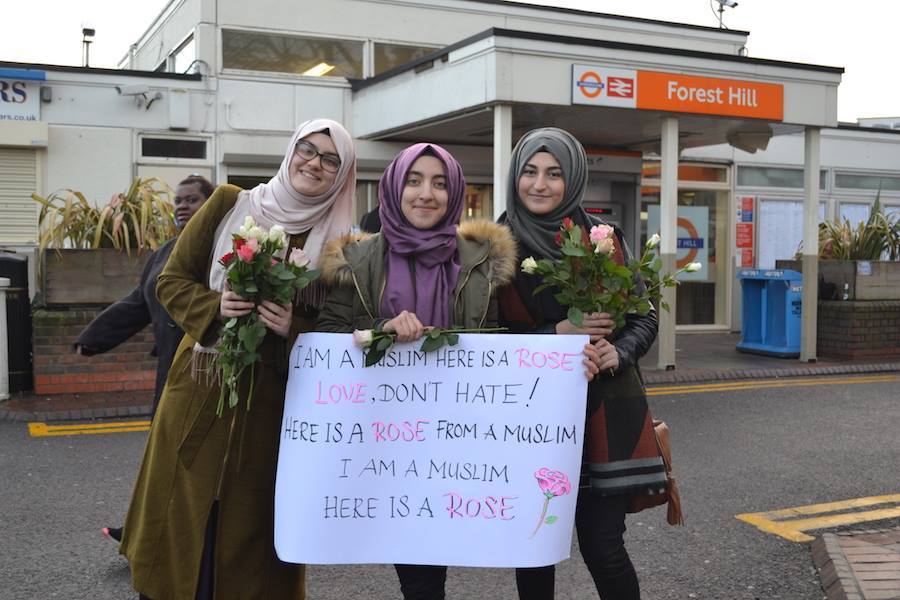 Members of the Dialogue Society took part in a community healing exercise in southeast London yesterday morning. Three young women, all wearing headscarves, stood outside Forest Hill station giving out roses to commuters, with one holding a banner that read:

Their simple, peaceful gesture followed a brutal stabbing at the station a few days earlier in a suspected terror attack. On Monday, 12 Dec, victim Muhammed Askar Ali received severe injuries to his head and upper body after he was stabbed by a man who, according to eye witnesses, shouted “I’m going to kill a Muslim”. The incident left local people severely shaken.

The alleged attacker, Adrian Brown aged 38, is said to be a local man with mental health issues. He was arrested shortly after by police and appeared at the Old Bailey on Wednesday charged with attempted murder, possession of a knife, and assault by beating. He was remanded in custody to appear at Southwark Crown Court on Jan 11.

One of the three Turkish-origin women at Forest Hill yesterday was 23-year-old Gulistan Arslan. She told the Evening Standard: “We went to spread peace in the community by giving out roses.

“A lot of people came and approached us. We met a young lady who witnessed what happened.”

“She told us what we were doing really warmed her heart and that really got me teary.”

“I was so surprised by how many people approached us and gave us hugs.”

“We’ve had so much wonderful reaction on social media.”

Their wonderful act of human kindness was warmly received. Dozens took to Twitter to thank them, with posts liked and re-tweeted by thousands more people.

While Daniel Mason tweeted: “Making Forest Hill and the world beautiful again, thank you to these wonderful girls this morning #foresthill #roses”

About The Dialogue Society

The Dialogue Society was formed in London in 1999 by Turkish Muslims living in Britain who follow the teachings of cleric Fethullah Gülen. The registered charity advances social cohesion by facilitating dialogue between diverse groups, hosting inter-faith events, forums and courses, and supporting academics who research into the same.

Gülen, resident in the USA since 1999, and his movement operate world-wide through a network of schools, mosques and charitable organisations. He and his supporters have been labelled terrorists and their organisation – dubbed FETO by the Turkish authorities – is accused of orchestrating the 15 July coup. Gülen, formerly a close ally of Recep Tayyip Erdoğan and his AKP government, refutes all charges against him.