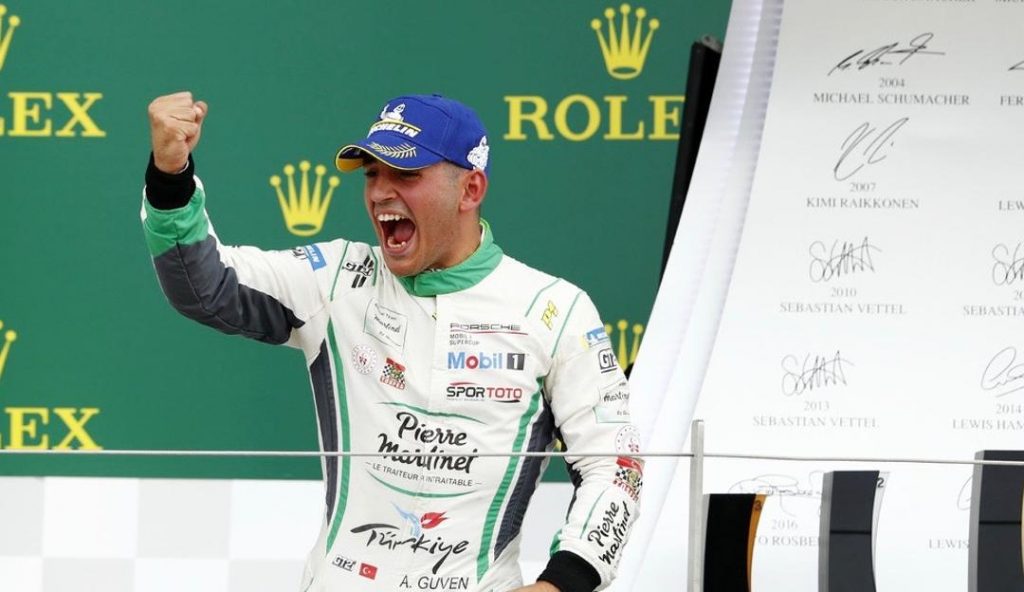 A 21-year-old driver was the toast of Turkey after winning one of four rounds in the Porsche Mobil 1 Supercup at the Silverstone Circuit on Sunday, 14 July.

Ayhancan Güven stepped on to the winner’s podium to the sounds of the Turkish national anthem after coming first in round four, marking the rookie’s first victory in the international one-make cup. He finished 3rdoverall with fifty points and two podium finishes after four races.

“Pole position on Saturday, victory on Sunday – I’m over the moon. After the start I managed to eke out a small advantage, which meant I didn’t have to risk too much when drizzle set in towards the end,” said Güven.

Güven led the field over the entire distance in race four. His victory means that, after Porsche Young Professional Dennis Olsen (2017) and Latorre (2018), Güven becomes the third driver in a row to score his maiden Supercup win at Silverstone.

The rising star of motorsport, who is supported by Turkey’s Automobile Sports Federation (TOSFED) and Spor Toto, has shown plenty of potential as a junior, wining Turkey’s Race of Champions in 2016.

The following year he narrowly missed out a spot on the podium after coming fourth at the Porsche Carrera Cup Le Mans in France.

However in 2018, Güven was crowned champion at both the Porsche GT3 Cup Benelux and France’s Porsche Carrera Cup, held at the legendary Circuit Paul Ricard.

Born in 1998 to a race car driver father, Güven has been racing since he was just four, initially playing race simulations before progressing to go-kart racing. Being around his father at races gave Güven a taste of what he wanted to do as a career.

His potential has been carefully nurtured by his father Hakan, TOSFED and others in racing, including former world motorcycle champion Kenan Sofuoğlu.

Güven has previously told media that Sofuoğlu “is one of my biggest supporters”, providing the young star with “considerable financial and professional aid” to aid his development in the costly sport.

Sofuoğlu, 34, and now an MP in Turkey, holds the record for highest number of Supersport World Championship titles, winning five during his fifteen-year career and up until Güven’s emergence, had been Turkey’s sole international racing champion.