Another step towards recognition, as TRNC accepted into the Organization of Turkic States 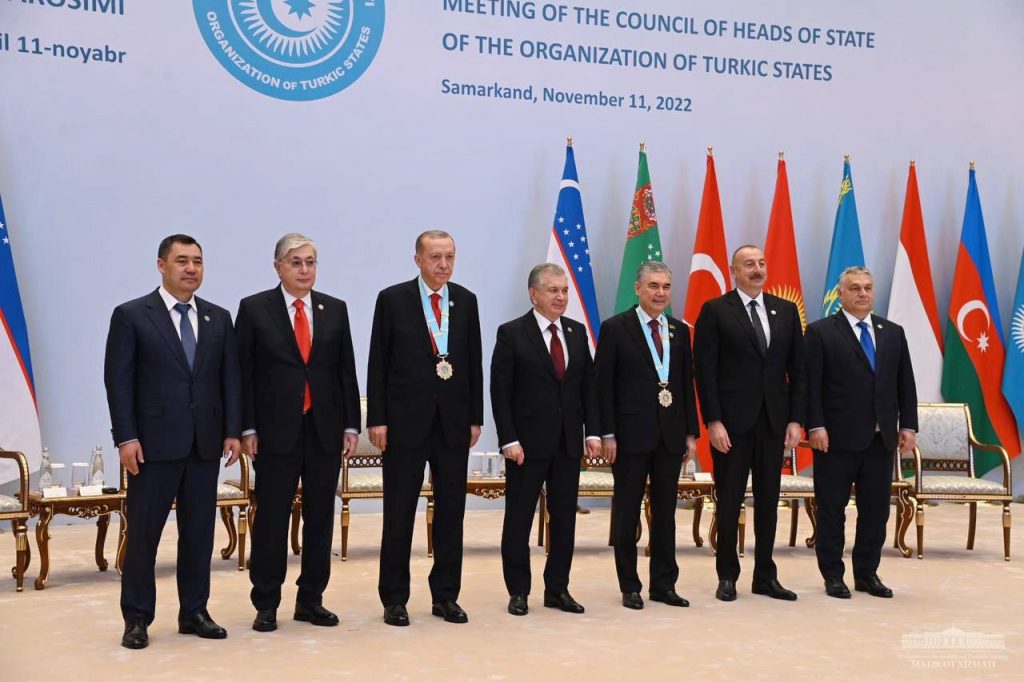 The Turkish Republic of North Cyprus (TRNC) has been admitted to the Organization of Turkic States (OTS) as an observer member under its full constitutional name – a first in its 39-year history.

The decision to accept the TRNC as an observer member was taken at the Samarkand Summit in Uzbekistan on Friday, 11 November 2022, and was unanimously backed by the heads of state of all five OTS member states.

The news was confirmed by TRNC President Ersin Tatar, who said in a written statement: “It is the first time the TRNC has been admitted into an international organisation with its constitutional name”, describing the development as “a momentous event in our history that is a source of pride for us.”

The OTS was established in 2009 by four founding members:  Azerbaijan, Kazakhstan, Kyrgyzstan, and Turkiye. Uzbekistan joined nearly a decade later, in 2018. In the same year, Hungary was admitted as an observer member, followed by Turkmenistan in 2021. The TRNC takes the number of observer states to three.

The primary purpose of the OTS, which was previously known as the Turkic Council, is to deepen co-operation among the Turkic republics in all fields including foreign policy, security, trade, and social and cultural development. The bloc currently represents a combined population of over 156 million people.

Responding to the announcement on Friday of the TRNC’s observer status at the OTS, the Turkish Foreign Minister Mevlüt Çavuşoğlu tweeted: “We are always by the side of #TRNC everywhere”.

The role of Turkiye in securing TRNC admission to the Turkic bloc was acknowledged by President Tatar in his statement. Extending his “gratitude” to the Turkish President, Recep Tayyip Erdoğan, and to Foreign Minister Çavuşoğlu, President Tatar said that, “Turkish diplomacy has been working hard to achieve this outcome.”

“My Esteemed People, I am extremely proud to announce that our State, the Turkish Republic of North Cyprus (TRNC), has been granted observer member status to the Organisation of Turkic States.

“It is the first time the TRNC has been admitted into an international organisation with its constitutional name.  This is a momentous event in our history that is a source of pride for us.

“We are very happy that our observer membership was unanimously accepted at the 9th Summit of the Organisation of Turkic States in Samarkand, Uzbekistan.

“The participation of the TRNC in this very significant international organisation is of particular importance. Since the day I took office, I have been putting forward a vision to put an end to the persecution of my people, who have been subject to inhuman isolation for more than half a century, deprived of their inherent rights, namely their sovereignty and international status.

“This righteous struggle, which has proven successful in leading to our new international membership, was accelerated with the call made by President of the Republic of Türkiye, Recep Tayyip Erdoğan, for the international community to formally recognise the TRNC at the 77th Session of the UN General Assembly on September 20.

“I would like to take this opportunity to reiterate that we shall be continuing our honourable struggle unabated, taking courage from this positive development which elevates our status particularly at a time when we are on the eve of commemorating the 39th anniversary of the proclamation of our Republic.

“My wish is that our status as an observer member State at the Organisation of Turkic States will be beneficial to all our people and the great Turkic world.”

Breaking the political deadlock in Cyprus

President Tatar was elected in 2020 on a mandate to pursue a two-state solution in Cyprus. He is the first Turkish Cypriot leader to reject the internationally backed federation solution, arguing that after fifty years of failed talks trying to reunite the island, it is time to try another approach to break the deadlock and restore political parity between the two sides in Cyprus.

Despite being the co-founders of the Republic of Cyprus, the Turkish Cypriots have been politically and economically isolated for nearly sixty years.

In December 1963, just three years after the island gained its independence from British rule, Greek Cypriots mounted a bloody coup and violently seizing control of the Cyprus government.

A poorly worded UN Resolution, 186, in March 1964, which aimed to stop the bloodshed, inadvertently referred to the Greek Cypriot side as the “government of the Cyprus”, while relegating Turkish Cypriots to a minority status. The Greek Cypriots have used this to their advantage ever since.

UN Resolution 186 is not only in breach of the 1960 Treaties and Constitution that established the Republic of Cyprus and its power-sharing government, however, it is also responsible for creating the current status quo, where only one side – the Greek Cypriots – is recognised, while Turkish Cypriots have no international status.

Without an official presence at the UN, Turkish Cypriots have problems trading, travelling and communicating directly with the rest of the world. Everything must go via Turkiye. Turkish Cypriots are also barred from international fora and global events, such as the Olympics and the World Cup.

The island has been politically split since the December 1963 coup, with both communities administering themselves for the past 58 years.

A second coup in Cyprus, backed by Greece to depose Archbishop Makarios in July 1974, led to renewed conflict that threatened the existence of Turkish Cypriots. Turkiye militarily intervened as a Guarantor Power and divided the island into a Turkish North and a Greek South. More UN-supported talks have followed to try to form a new-power-sharing model, but despite a blueprint through the High Level Agreements of 1977 and 1979, a comprehensive settlement has proved elusive.

After two decades of failed talks, Turkish Cypriots decided to go it alone, declaring the TRNC in 1983 to assert their equal status and rights, but to date Turkiye is the only country to recognise the Turkish Cypriot state, with UN resolutions calling for its non-recognition.

Although initially reluctant to back Ersin Tatar’s election manifesto pledge for a two-state solution, there has been a colossal shift in Turkish foreign policy towards TRNC recognition after more failed talks between the Greek and Turkish Cypriot leaders in Geneva in April 2021.

Two months ago, President Erdoğan called on the world to recognise the TRNC in a ground-breaking speech he gave at the United Nations.