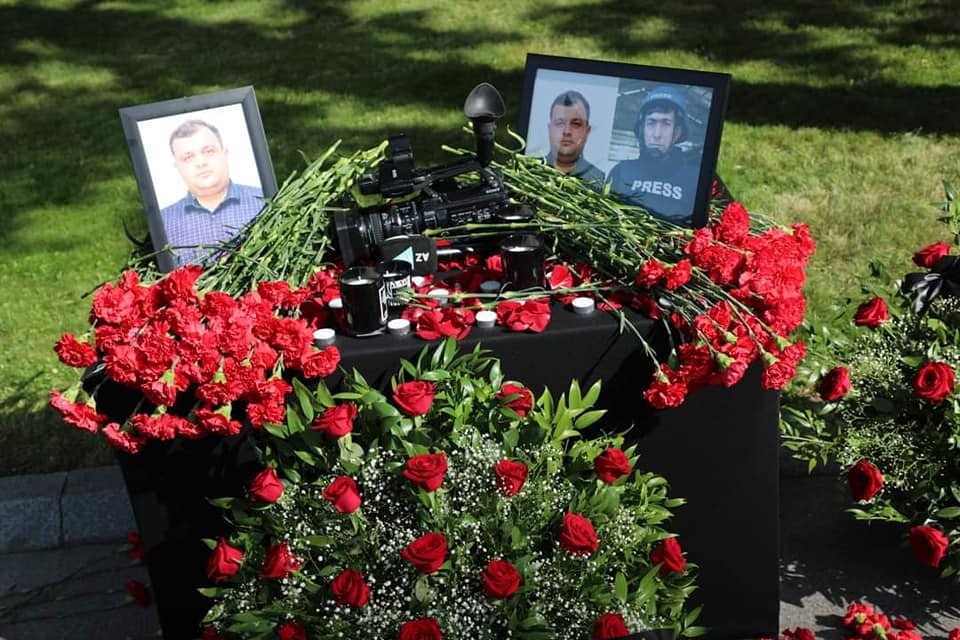 Azerbaijan’s Foreign Minister Jeyhun Bayramov has called on Armenia to “hand over minefield maps” after three civilians were killed by a landmine explosion in Kalbajar district – part of the newly liberated Nagorno-Karabakh region.

Tweeting about the tragic incident, which occurred on Friday, 4 June, the Foreign Minister said, “Every day they [Armenia] continue to refuse this request, more lives are endangered!”

On Friday, two Azerbaijani journalists and an official died when their vehicle hit an anti-tank mine around 11am local time. Four others were injured and taken to hospital.

Those killed were named as Siraj Abishov, a cameraman for state broadcaster AzTV, Maharram Ibrahimov, a correspondent for the Azerbaijan State News Agency AzerTag, and Arif Aliyev, a local official.

A statement from AzTV on Friday said the journalists had been on a mission to capture the destruction of Azerbaijani heritage in the Nagorno-Karabakh region, which was returned to Azeri control last November after being under Armenian occupation for the past thirty years.

The crew were seeking to “demonstrate to the world and document the vandalism committed by Armenia against the property and historical monuments of the Azerbaijani people during the 30-year occupation.”

“Today [Friday 4 June], the bus carrying that group has got blown up by an anti-tank mine on the way to Kalbajar region’s Susuzlug village.

“As a result, cameraman of Azerbaijan Television Siraj Abishov born in 1989 and correspondent of “AzerTag” Maharram Ibrahimov born in 1982 and deputy representative of head of the Regional Executive Power on Susuzlug village Arif Aliyev have died.

“Four people have been taken to hospital with various injuries. Film director of Azerbaijan Television Emin Mammadov is also among them,” the AzTV statement continued.

The broadcaster extended condolences messages to the bereaved families, while also accusing Armenia of “a terror act against the activity of journalists in the territories liberated from occupation”.

AzTV claimed it was “the result of Armenians planting mines while leaving Kalbajar.”

Azerbaijan’s Foreign Ministry also blamed the blast on Armenia, accusing it of violating the Geneva Conventions by deliberately planting landmines. There was no immediate response from Armenia.

Deeply saddened to learn that 3 Azerbaijani civilians, including 2 journalists have been killed in a landmine blast in #Kalbajar district of #Azerbaijan.

We call on #Armenia to hand over minefield maps. Every day they continue to refuse this request, more lives are endangered!

“We call on our colleagues abroad to put pressure on the Republic of Armenia to provide the maps of mined areas,” said Mushfiq Alasgarli, President of the Azerbaijani Journalists’ Trade Union (JuHI) and the Deputy Chair of Azerbaijan’s Press Council, echoing Foreign Minister Bayramov’s statement.

“This could seriously help to eliminate the threat to the lives of a wide range of individuals, including journalists. This support can also be a great contribution to the establishment of justice, peace, security, stability, and the resolution of the long-running conflict in the region,” Mr Alasgarli added.

“We call on the authorities in Azerbaijan not to expose journalists to disproportionate risks on the ground. And we call on the Armenian authorities to hand over the plans of the mined areas, in order to avoid further civilian casualties” the co-authored statement continued.

Kalbajar is one of the regions that was handed back to Azerbaijan after last year’s conflict, which ended in November. Fighting during the six week conflict, which broke out on 27 September 2020 after weeks of skirmishes, cost the lives of over 6,000 people.

During the war, Azerbaijani troops regained control of five cities, four towns, and 286 villages, as well as the Azerbaijan–Iran border.

After the peace deal brokered by Russia, Azerbaijan not only retained control of the territories it had captured during the war, but all other Armenian-occupied territories surrounding Nagorno-Karabakh.

The Nagorno-Karabakh region is internationally recognised as part of Azerbaijan. It was seized and occupied by Armenia in the early 1990s, during the First Nagorno-Karabakh war, which killed at least 30,000 people.