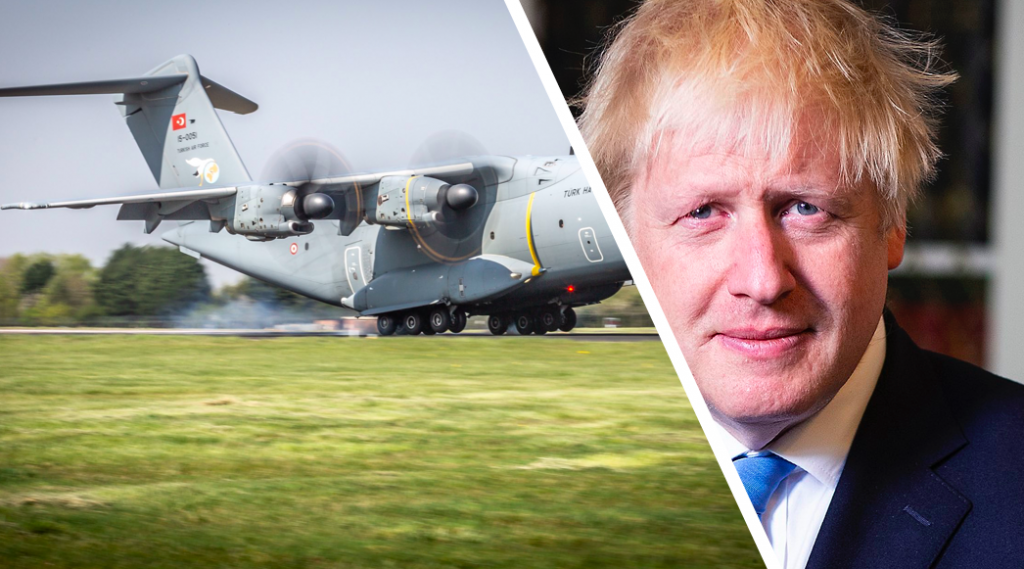 A Royal Air Force A400 plane took off from Istanbul in the early hours of this morning carrying a large consignment of personal protective equipment (PPE) from a commercial supplier in Turkey.

The plane arrived back at RAF Brize Norton in Oxfordshire just after 3am local time, ensuring essential PPE, such as surgical masks, gloves, eye protection, and protective suits, can be distributed quickly to frontline health workers treating coronavirus patients just as vital stocks in Britain run out.

The consignment forms part of an order for 84 tonnes of PPE from the British government made last week, which was then subject to a 48-hour delay because the UK only applied for an export licence for the goods on Sunday.

PPE has come under strict restrictions in Turkey following the outbreak of the coronavirus pandemic. All supply is controlled by the Turkish government to ensure there is sufficient domestic availability.

Media reports suggest the full order, equivalent to 400,000 pieces of PPE, is not yet ready, and that Turkish authorities are working with the Turkish supplier and the UK government to secure the rest of the shipment, although no time frame has been given.

With demand for PPE soaring globally, supply chains worldwide are struggling to produce and deliver a sufficient number of goods quickly enough. The UK has been scouring for available stock from international commercial suppliers, while being criticised domestically for not using British manufacturers.

Turkey and Britain enjoy a significant trade relationship, annually worth in excess of $18.5. bn. Turkey’s strong, competitive manufacturing base, particularly in textiles, also makes it a firm favourite for British procurement.

Remember the lies dressed up as a threat
Then let’s also remember who came to our health workers’ rescue when they needed it #Turkey https://t.co/GxPosFb9Gm pic.twitter.com/zj3vrteoAY

The country has also been at the forefront of donating PPE to countries in need worldwide. In a recent television interview with NTV, Turkish Foreign Minister Mevlüt Çavuşoğlu said that Turkey had sent medical aid to some 44 countries since the outbreak of the COVID-19 pandemic.

Ten days ago, Turkey donated 250,000 items of personal protective equipment, delivered to RAF Brize Norton on two Turkish Air Force A400M planes. The UK’s department of Health said these would be distributed “to medical centres across the country”.

The irony of Boris Johnson’s government turning to Turkey for vital medical aid was not missed by the British Turkish community and others, who took to social media to remind the Prime Minister about his involvement in the xenophobic anti-Turkey Brexit campaign of 2016.

“Remember the Brexit lies we were told about Turkey & now how the UK government turned to them for help during this coronavirus crisis”, wrote Baroness Meral Ece-Hussein on her Facebook page.

“Remember the lies dressed up as a threat. Then let’s also remember who came to our health workers’ rescue when they needed it #Turkey,” tweeted former chief prosecutor Nazir Afzal OBE.

“Hope this comes together for NHS heroes. Ironic the ‘manufacturing’ UK dependent on the one country Brexiteers terrified would join EU! Yep Brexit brings it home #Turkey”

Hope this comes together for NHS heroes. Ironic the ‘manufacturing’ UK dependent on the one country Brexiteers terrified would join EU! Yep Brexit brings it home#Turkeyhttps://t.co/8fsi16q2Hw