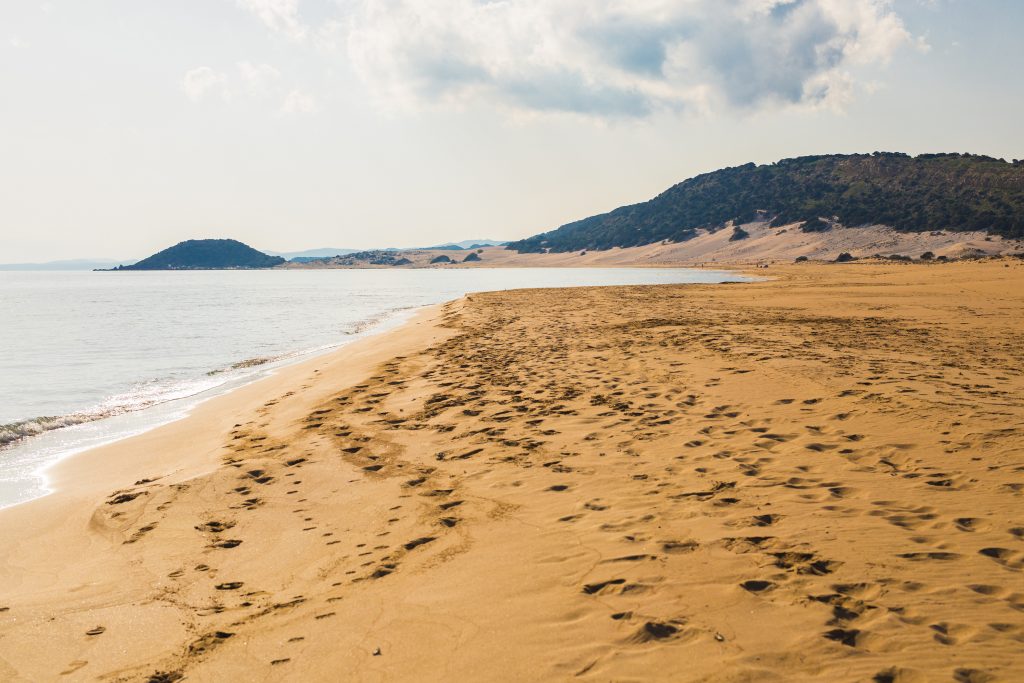 Being cancelled as an author for writing about books inspired by your homeland is not what you expect to happen, especially when the article is for one of Britain’s most progressive papers. Yet that’s what occurred when Metin Murat submitted his Top 10s to The Guardian, which proudly claims to be “giving a voice to the powerless”, but not, it appears, if you are a Turkish Cypriot.

Murat has recently published his debut novel The Crescent Moon Fox that is set in his native Cyprus. He was invited to submit an article about his favourite books for The Guardian’s weekly Top 10s book column.

Murat lovingly drafted his selection, topped with an introduction reflecting on life and the division of his beloved island. Initially the article was accepted with praise by the journalist responsible for the column, but his article was then dropped due toobjections by an unnamed editor for seemingly falling foul of the The Guardian’s anti-Turkish house style on Cyprus.

The editorial problems seemed to centre on both Murat’s choice of books and also his language about Cyprus.

The author, whose roots hail from Balalan / Platanissos in the Karpaz Peninsula, was told to omit Elif Safak, and was then pulled up for calling his ethnic homeland by its current name, the Turkish Republic of North Cyprus (TRNC), and for using neutral language when referring to the Turkish Army’s arrival in Cyprus in 1974.

T-VINE has invited The Guardian to comment on why the article was rejected, but have had no response to date. We have therefore decided to publish the Top 10s article that Murat submitted to The Guardian in full, so you can decide for yourselves whether there was anything that merited the article being rejected.

Cyprus is all too often known for the wrong reasons: the crass excesses of Aya Nappa holiday makers, bribe-taking politicians and a Hollywood-like existential and eternal struggle between Greek and Turk. These potent clichés of my island belie, of course, its breath-taking beauty, its cultural and historical richness.

There is one particularity to our Island’s history and that is that we have always been a colonized land – from the Mycenaeans, to the Phoenicians, the Egyptians, the Romans, The Byzantines, the Crusaders, the Venetians, the Ottomans and mostly recently the British. The attractiveness of our Island to foreign powers is due to our strategic position in the Eastern Mediterranean – whichever empire was dominant has sought to maintain a foot hold in Cyprus.

In 1960 we gained our Independence from Britain. It should have been a golden era for us Cypriots. Instead, the pernicious forces of nationalism, some of which had been fermenting for centuries, culminated in internecine conflict of the 1960s and the divide of our Island in 1974 with the arrival of Turkish soldiers.

Today the EU Republic of Cyprus lies to the south, with Larnaca, Limassol and Paphos, well-known to holiday makers, while the Turkish Republic of Northern Cyprus (TRNC) has Kyrenia and the stunningly beautiful pan-handle of our Island.

My own novel The Crescent Moon Fox sets outs to give a voice to my own specific community, the Turkish Cypriots – for so long defined by everyone other than ourselves. It does so without animosity towards my fellow Cypriots, without nationalism, and with a clear respect for our Island’s modern history.

In a broader sense, it could be argued that the novel fits in to that category, so memorably labelled by Salman Rushdie, as ‘Writing Back to the Empire’. But there is an important caveat.

Unlike many of the post-colonial writers writing in English, I have done so with love, deep affection and perhaps a little nostalgia, for Britain, particularly that of the 1950s. I am very conscious that this is a luxury that I, as a Turkish Cypriot, can afford, for Cyprus’ experience of colonialism, as one of the British Empire’s strategic colonies, was very different to that endured by the extractive colonies of India, Nigeria or Jamaica (to name but a few).

My selection of books on Cyprus, in author alphabetical order, is a very personal choice. Some of the books are well known, some are obscure, however The Crescent Moon Fox is either a response to them or seeks to build upon them. Overall, they will give the reader interested in Cyprus, a deeper understanding of our history and our very varied perspectives and experiences.

This charming autobiography by Turkish Cypriot poet, Taner Baybars, gives a sense of Cypriot identity and co-existence before the rise of extreme nationalism in the 1950s. It also gives valuable insights into the creation of Turkish identity amongst Turkish Cypriots in the 1940s. But also, the deep affection that Turkish Cypriots had for Britain – something which is all too often forgotten today.

Durrell’s book on Cyprus is probably the most famous book about our Island. It gives the author’s perspective on the final years of the British Empire and enjoyed wide acclaim for many years. I think however it is a book worth re-reading with the critical gaze of the 21st Century.  A fresh reading of it will show Durrell’s narrow understanding of his subject matter and, through his use of language, his contempt and dehumanization of Turkish Cypriots.

For readers trying to get an objective view of the political issues facing Cyprus this is an excellent primer. Although, most likely, and perhaps this is the proof of its objectivity, neither Greek Cypriot nor Turkish Cypriot nationalist politicians will agree with its conclusions.

Ioannides is one of the most revered Greek Cypriot authors. This collection will give readers a very palpable sense of the fear and enmity that one side felt for the other. For this reason, it is also important for Turkish Cypriots to read Ioannides and understand the perspective of our fellow islanders. I hope that my novel The Crescent Moon Fox will show that a new generation of Cypriot writers can deal with the tragic events of our recent past in a manner that seeks to depict the humanity of both sides. in an even-handed manner. If there is hope for our two communities it perhaps lies in the fact that Panos Ioannides’ son, Haris, is the publisher of my novel…

This is truly a book of the late 1960s. It was radical for the time for its frank treatment of sexuality and violence and its progressive forms of narration – that even include fonts of different colours to convey varying moods. But to my mind this book is a tour-de-force in the way in which it conveys, much like Camus does in The Plague, the impending sense of doom and menace facing Cypriot society as it is being consumed by the nationalist ideology, of Enosis – the belief that Cyprus should be part of Greece.  Meleagrou sums it up beautifully when she writes “that past dominated by the Great Idea which has done so much harm.” It is also valuable as a marker of the different perspectives within the Greek Cypriot community and a reminder that many Cypriots – irrespective of their ethnic label – share a common perspective.

This book is a useful counterbalance to a prevailing narrative that the problems of Cyprus were a result of British rule. It has the advantage of contextualizing British rule in the wider continuum of colonial powers that have occupied Cyprus, most notably the Ottomans. Clearly some British displayed attitudes which we would find unattractive today, but Morgan I think does an excellent job at highlighting the positive aspects of British rule in Cyprus.

This collection of short stories is a great introduction to contemporary Cypriot literature and will give readers a sense of the literary vibrancy that is emerging on our Island.  However, Nora’s significance is much more than as a writer (and poet): she is from one of the minorities of our Island that is all too often forgotten about, the Armenians. We Cypriots collectively owe an important debt to our Armenian community for its various contributions to the preservation and development of our literature. 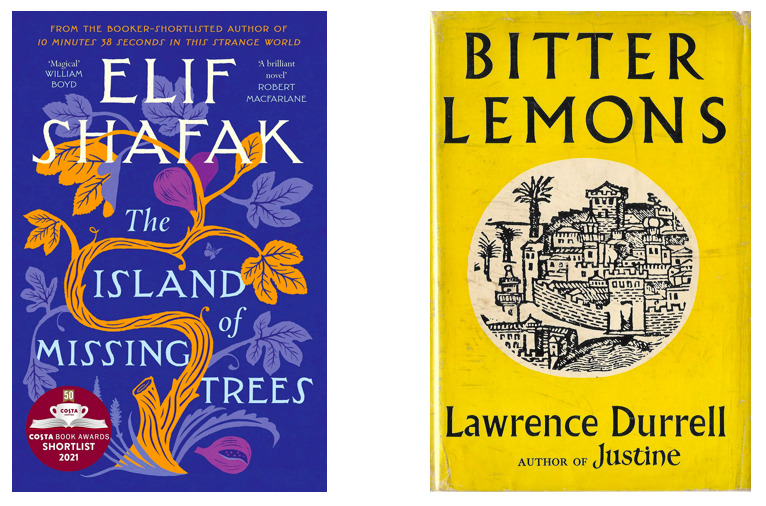 This collection of first-hand accounts of the momentous year of 1974, told by Greek and Turkish Cypriots, is a tribute to reconciliation. It is also for me deeply personal. Pantelides who collected these stories was, as a young soldier, deployed to attack and bomb the village from which I originate, Balalan/Platanissos. By all accounts the attack was an inept affair and thankfully no one from the village was harmed.

My guess is that over time Elif’s novel will become the book on Cyprus and will take on Durrell’s long held crown. For this reason alone it deserves a place on every bookshelf devoted to Cyprus. For the general reader it is an entertaining and touching story about inter-community love and provides a welcome perspective that depicts our shared humanity as Cypriots. As a writer, I can’t help but also admire her ingenuous narrative device!

This is my favourite book on Cyprus. It is a deeply empathetic and beautiful narrative about Cyprus, written just before 1974. It shows us Cypriots at our best, most charming likeable selves, and tragically, at our stupid worst. A mirror for us.