The 288-page hardback featuring classic Turkish Cypriot recipes went straight in at Number One under the Manuals section of The Sunday Times Bestsellers List – the oldest and most influential book sales chart in the UK.

Usually a book needs to sell between 5,000 and 10,000 copies in a single week to top the book charts. Meliz’s Kitchen was released on 30 June, giving her just three days before the sales data for the seven day period ending 02 July 2022 was compiled by Nielsen BookScan, which covers 90% of all book sales in the UK (also known as the Total Consumer Market, TCM).

The news was the perfect Bayram (Eid) gift for the Turkish Cypriot mother of two. Responding to her chart-topping feat, Meliz wrote on her social media pages:

“I honestly cannot BELIEVE this, but yes that’s right, Meliz’s Kitchen is officially a No.1 Sunday Times Bestseller!

“When I finished writing this book, I said to my husband that if just one person bought it then I’d be a very happy woman. So this is the full on, cream-slathered cherry on the top accolade that I NEVER could have imagined or planned for. I cannot thank each and every one of you enough because your love and trust in my recipes has done this. 💕” 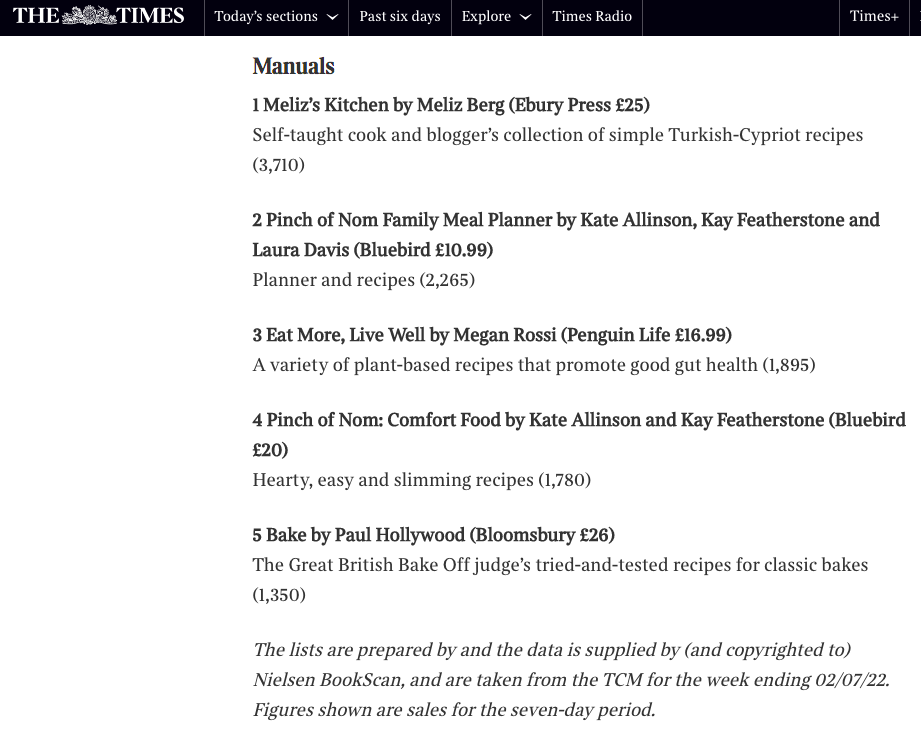 Originally from Walthamstow, East London, Meliz started a food blog as a hobby after she gave birth to her first child.

She acquired a large following on social media during the pandemic with thousands sharing her easy-to-follow homemade recipes of Turkish and Cypriot comfort food that she has been learning from her mother and grandmother since childhood.

The self-taught cook, who was once a classically trained singer and music teacher, decided to transfer her most popular recipes into a book.

As part of the build-up to the release of Meliz’s Kitchen, Meliz has had her recipes published in various national newspapers, and also become a regular contributor on ITV’s popular This Morning show, where she has showed viewers how to cook traditional Turkish Cypriot family favourites, including ‘Kıymalı Garavolli’ (One Pot Lamb Mince & Conchiglie Pasta) and Tavuklu Patates Kebabı (Chicken & Potato Traybake).

You can get your hands on a copy of Meliz’s Kitchen: Simple Turkish-Cypriot Comfort Food and Fresh Family Feasts from any good bookshop for £25.