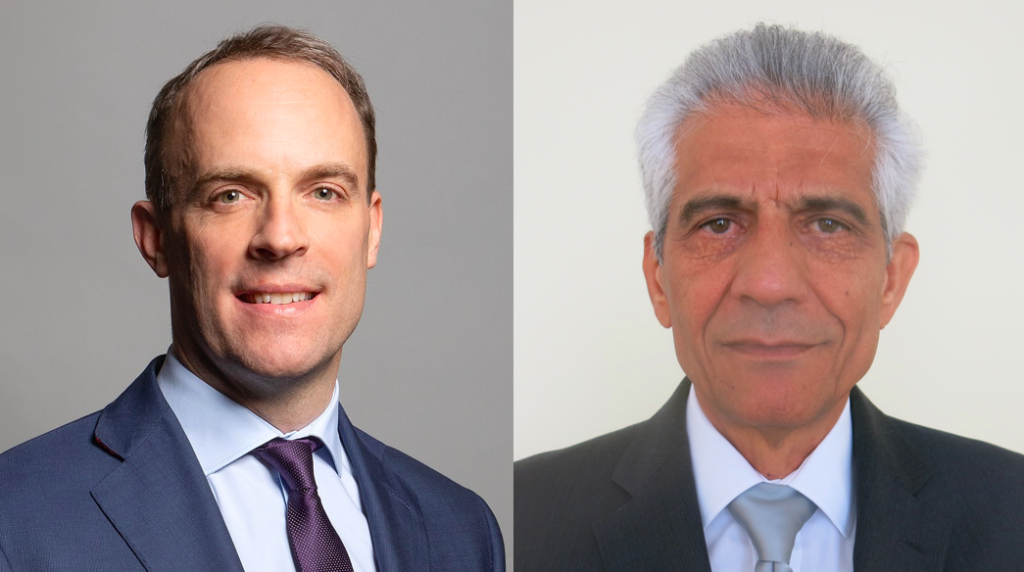 The Council of Turkish Cypriot Associations UK (CTCA) has launched a campaign to stop plans for commercial and residential development on Turkish Cypriot property in Britain’s Sovereign Base Areas (SBAs) in Cyprus, calling the plans “unlawful”.

The CTCA accuses the UK government of “deliberately undermining” Turkish Cypriot legal and political rights in order to move its Brexit agenda forward.

In a statement, the umbrella body for British Turkish Cypriots has called for a halt to plans for non-military development on the sovereign bases until “after Turkish Cypriots are properly consulted and represented in the process.”

Turkish Cypriot landowners are believed to own most of the land occupied by the SBAs, but currently have no say in what happens there.

The issue stems from a pact made by the British and Greek Cypriot authorities in 2014 to allow commercial and residential development on the Dhekelia and Akrotiri military bases. Such development is banned under the terms of the 1960 Treaty of Establishment.

The 1960 Treaty established the independent Republic of Cyprus, and also enshrines the political equality of the two Cypriot communities. The same Treaty sets out the territories of the two British sovereign base areas, limiting their use to “military purposes” only. “New settlement of people” and “civilian commercial or industrial enterprises” on the land is forbidden.

Altering the usage of land occupied by the Dhekelia and Akrotiri bases requires a change to the terms of the Treaty, which in turn requires the consent of all five of the original signatories – the UK, Turkey, Greece, the Greek Cypriots and Turkish Cypriots.

Despite the 2014 Agreement only having the signatures of David Cameron’s government and the Greek Cypriot-controlled Republic of Cyprus, it still declared that non-military development (NMD) on the bases is permissible.

The CTCA argues this is “unlawful” as it lacks the consent of all five original signatories. They also claim it amounts to a serious violation of Turkish Cypriot political rights.

In a recent programme on Turkish Cypriot channel Kanal T, Ersu Ekrem, chairman of the British Turkish Cypriot Association (BTCA), draws a parallel between this action and the UN’s badly-worded Resolution 186 in March 1964, which inadvertently relegated the status of Turkish Cypriots from “co-founder” to a “community”. Mr Ekrem believes the UK’s current actions are equally damaging and need to be resisted.

The governments of Turkey and the Turkish Republic of North Cyprus, CTCA and other Turkish Cypriot organisations condemned the 2014 Agreement at the time, and nothing more was heard about it until two months ago.

On 9 June 2020, in the middle of the coronavirus pandemic, the UK and Greek Cypriot foreign ministries suddenly announced they were moving to “Implementation Phase” of their 2014 Agreement, and launched a 35-day consultation process the following day. These actions were again denounced by the Turkish side.

However, the CTCA has moved a step forward after its members organisations the BTCA and Embargoed! flagged the serious nature of the threat.

Ertuğrul Mehmet, chairman of the CTCA, said, “The Turkish Cypriot community only learned that the UK Government was pressing ahead with its dubious 2014 Agreement with Greek Cypriots through the press. Despite the Foreign Office’s promises to us in 2014, we Turkish Cypriots are again excluded from all decisions.”

The view from the Turkish Cypriot camp is that Britain is “sacrificing” Turkish Cypriot political rights to gain support from Greek Cypriots for its trade negotiations with the European Union.

The authorities in the South make no secret of their eagerness to extend their power over the entire island at the expense of Turkish Cypriots, a battle that has been raging since 1963.

“The UK’s departure from the EU offers Greek Cypriots a new and important opportunity to dilute the rights of Turkish Cypriots as set out in the Treaty of Establishment, which they are fully grasping, fully aided by the UK government. In short, Turkish Cypriot rights are being sacrificed on the altar of Brexit,” the CTCA chairman told T-VINE.

“The UK is a Guarantor Power. It has a duty to uphold our political equality, but instead the government is deliberately undermining them. Our rights our being eroded in a bid to court Greek Cypriots, whose support the UK needs for its EU trade deal,” he added.

Mr Mehmet has written to British Foreign Secretary Dominic Raab and Stephen Lillie, the British High Commissioner in Cyprus, outlining Turkish Cypriot concerns. He has also demanded the Implementation Phase is paused, so that Turkish Cypriots can be properly embedded into the process.

Turkish Cypriots are significant landowners on the bases and in surrounding villages. An estimated 70% of Akrotiri, for example, is Turkish-owned. 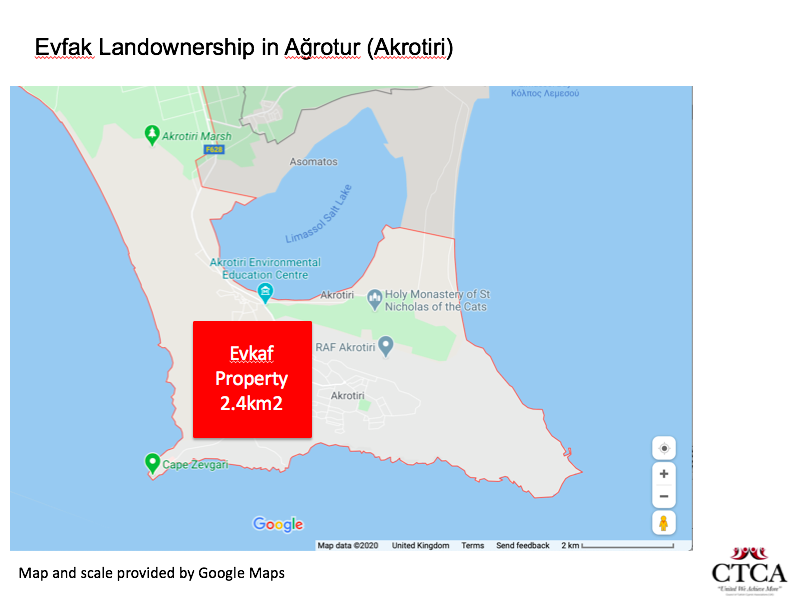 At least 2,400 dönüms, or 2.4 km2, of land in Akrotiri is owned by Evkaf (Cyprus Islamic Foundation) – Cyprus’ largest private landowner. It is believed land housing the Dhekelia base is also mainly Turkish-owned.

Evkaf has also made its objections clear to the SBA Administration. In a letter to the British authorities, seen by T-VINE, the Head of the Trust Professor Ibrahim Benter said the actions of the British to implement NMD without the consent of Turkish Cypriots “violate the underlying philosophy of the 1960 Treaty of Establishment.” The Trust has threatened legal action if there are attempts to ‘develop or exploit’ its immovable property.

Mr Mehmet echoes the line taken by Evkaf. He says CTCA have been contacted by dozens of Turkish Cypriot landowners in Britain, Australia and in Cyprus concerned about their property and the implications from the growing involvement of Greek Cypriot authorities in the SBAs, while there are no Turkish Cypriot officials involved at all.

“The UK’s approach to development on the bases is tantamount to confiscating our immovable property because there are no Turkish Cypriot representatives involved to safeguard the community’s assets. It is an outrageous position for Guarantor Britain to put Turkish Cypriots in,” stated Mr Mehmet.

Greek Cypriots have a poor track record in respecting the property rights of Turkish Cypriots, who are regularly obstructed from reclaiming their land in South Cyprus or compensation for loss of use due to the Cyprus Conflict, with some claims dating back to 1964.

In June, six Turkish Cypriots became the latest to lose a case brought against the Greek Cypriot authorities for depriving them of their land in Larnaca. The plaintiffs had hoped to secure over €9 million in compensation, but as they did not fulfil the criteria set out in the Guardian Law the court ruled they were not entitled to any form of restitution.

The Guardianship Law places the Greek Cypriot Ministry of Interior as the ‘guardian’ of Turkish Cypriot property in South Cyprus that was abandoned due to the Cyprus Conflict. The 1991 legislation is widely viewed as political tool that discriminates by setting extraordinary criteria for original owners to reclaim their property, and has been successfully used by the Greek Cypriot authorities to prevent hundreds of Turkish Cypriots from accessing their property or receiving compensation. 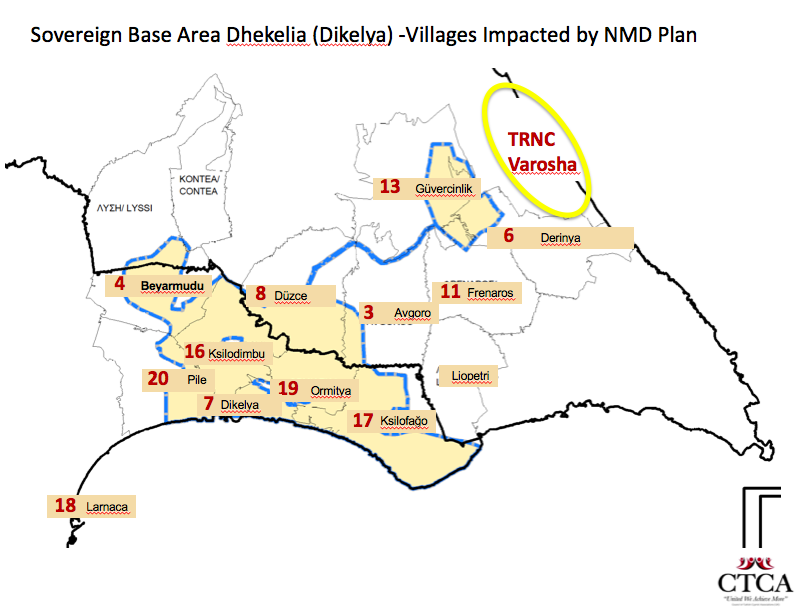 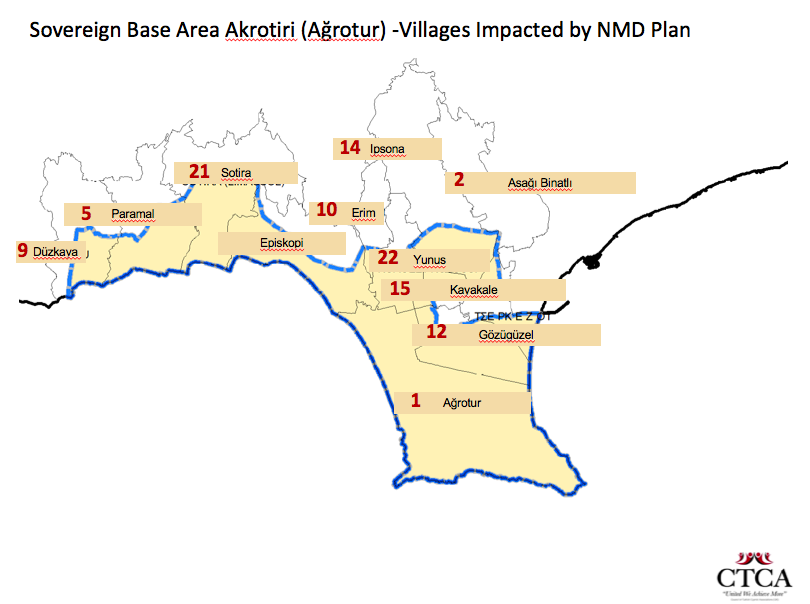 The fears that the Guardian Law may be extended to the SBAs has been heightened due to the bias against Turkish Cypriots in the SBA Consultation Process, which involves Greek Cypriot officials and consultants.

Human rights group and CTCA member Embargoed! carried out research into the UK’s SBA online consultation documents and uncovered multiple procedural flaws and errors. These include:

Fahri Zihni, who heads Embargoed! said: “We cannot understand how this project is going ahead without the consent of Turkish Cypriots, without any agreement on how commerce should be regulated, and without an intelligible consultation document about protecting the environment.

“The document provided for Greek language speakers is 255 pages, English is 103, with Sections 1-7 missing, and the Turkish Language version is missing altogether.”

“We demand that the UK goes back to the beginning of this process and shows more respect to the rights of landowners by consulting widely across both communities of Cyprus,” he added.