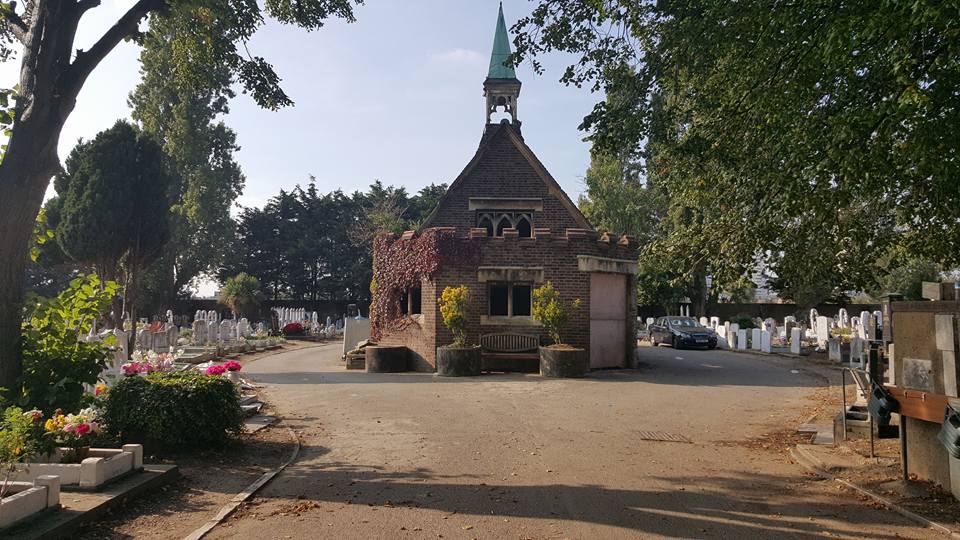 Enfield Council has issued a statement on Tottenham Park Cemetery, which is currently closed to the public. The statement answered questions put to the local authority by T-VINE Magazine about the privately-owned site that is the resting place for thousands of British Turks.

On Friday 16 February, Terry Lowe, a director of the company managing the cemetery, told T-VINE the landowners had been “ordered by the council to immediately close the cemetery due to a risk to life”. This claim and the decision to close the entire site was challenged by some relatives. A few relatives had also mentioned on social media they were keen to enter the cemetery to pay their respect to loved ones, even if that meant breaking in.

Enfield Council addressed these points in its 320-word statement. The local authority confirmed that the North London cemetery situated off Montague Road had been “referred to the Health and Safety Executive as the enforcement body” because it posed “a high risk to the safety of visitors”.

The council said the closure of the entire site since 16 February was “appropriate in the circumstances”, and that it was working with the cemetery owners Tottenham Park Cemetery Ltd “to make the cemetery safe and therefore re-open it as soon as possible.”

The involvement of not only the local authority, but also the Health and Safety Executive (HSE) places a legal obligation on the owners of Tottenham Park Cemetery to act or face legal action and penalties.

The HSE is independent of the local authority (LA), and both have extensive powers to enforce health and safety legislation across the public and private sectors to ensure workplaces and public sites are safe for users and workers. The HSE and LAs often work closely together.

According to the HSE website the LA serves as the “main enforcing authority in retail, wholesale distribution, warehousing, hotel and catering premises, offices, and the consumer/leisure industries”. The LA has other powers to enforce primary health and safety legislation too, or – as in the case of Tottenham Park Cemetery – it can refer its concerns to the HSE.

With urgent remedial works currently taking place on site, Enfield Council cautioned against the idea advocated by “some members of the [Turkish] Community” to enter “the cemetery despite it being closed”, adding that it is “essential that the cemetery is not entered when it is closed due to risks to personal safety”.

The statement, issued on Thursday afternoon, followed questions put to Enfield Council by T-VINE Magazine about Tottenham Park Cemetery’s ongoing closure.  We asked the council what actions it had taken after relatives had complained to the landowners and the local authority about health and safety concerns. We also asked what powers the local authority had to enforce action over privately-owned property, and whether these powers had been used in the case of Tottenham Park Cemetery.

Finally, we asked the council to comment on the owner’s claims that ‘the entire cemetery had been closed following council orders’, initially over a dangerous spire on a disused chapel and then ‘over trees not fulfilling safety criteria’. We highlighted the lack of clarity for leaseholders who were keen to visit the graves of their loved ones, but who ‘have no idea under what authority the cemetery has been closed and for how long’.

Talking to T-VINE editor Ipek Ozerim on Thursday morning, Enfield Council’s Press Manager’s Andrew Golder said they had been busy pulling together the information to provide a full response to these questions. Shortly after the council sent T-VINE and other community groups the following official statement:

“Members of the community raised serious concerns with the Council about the condition of Tottenham Park Cemetery, Montague Road, Edmonton.

“As a result, Council officers inspected the cemetery and identified conditions and structures within the cemetery that posed a high risk to the safety of visitors to the cemetery.  These safety concerns were raised with Tottenham Park Cemetery Ltd, and also referred to the Health and Safety Executive as the enforcement body.

“In the light of the safety risks, Tottenham Park Cemetery Ltd took the decision to close the cemetery on Friday 16 February 2018 to protect the public.

“The Council understands how distressing and upsetting it is for the community to be unable to visit their loved ones in the cemetery. It was appropriate in the circumstances that Tottenham Park Cemetery Ltd took action to close the cemetery.  The Council is in communication with Tottenham Park Cemetery Ltd and will do whatever it can to facilitate the company in their actions to make the cemetery safe and therefore re-open it as soon as possible.

Enfield Council: “It is essential that the cemetery is not entered when it is closed due to risks to personal safety”

“We understand that some members of the Community have advocated entering the cemetery despite it being closed.  It is essential that the cemetery is not entered when it is closed due to risks to personal safety.

“Tottenham Park Cemetery Ltd have commissioned their own inspections to determine the best course of action for the remedial works needed.  The company is in communication with the Council to discuss their proposals for completing immediate remedial works, so that the cemetery can be re-opened as soon as possible.

TPCT: “We welcome the statement from Enfield Council. Tottenham Park Cemetery has been neglected for too long.” 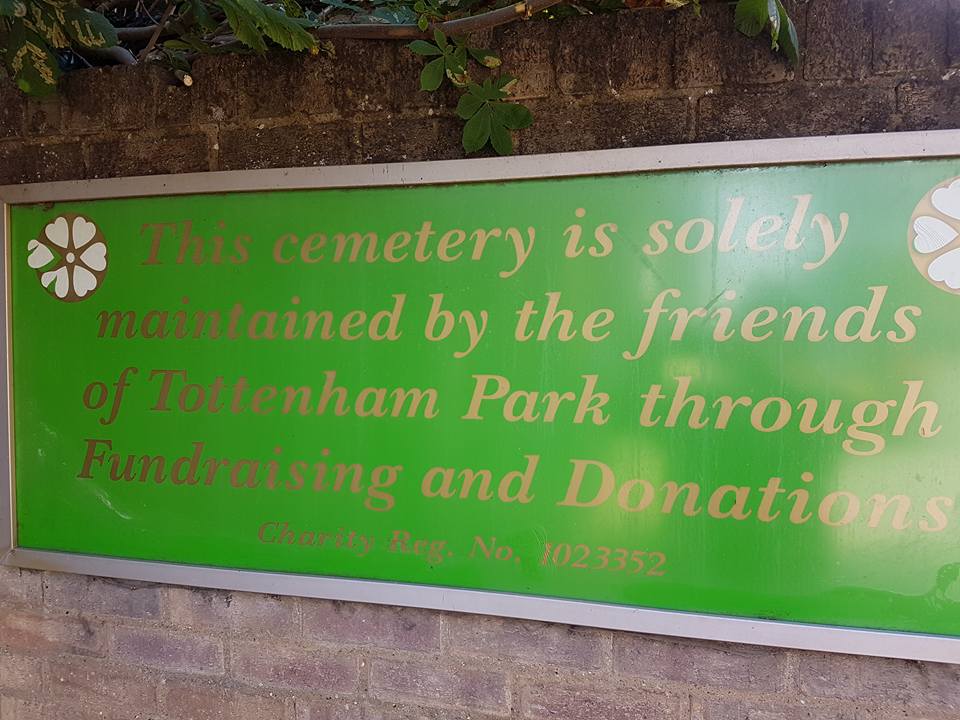 The Tottenham Park Cemetery Trust (TPCT), which represents British Turkish families whose relatives are interred at the Edmonton burial ground, welcomed the council’s statement. Since its inception over twenty years ago, the TPCT has been very vocal about safety concerns across the site. With the landowners failing to act on these the new committee, backed by relatives, have instead been lobbying the local authority and North London MPs to take action over the poor and dangerous state of the cemetery.

The TPCT issued its own statement in response to the one from Enfield Council:

“We welcome the statement and clarification from Enfield Council, who we’ve been working with for a number of weeks. Tottenham Park Cemetery has been neglected for too long. After many years, the Council has finally taken the concerns raised by the Turkish Cypriot community relating to health and safety issues seriously.”

“We will continue to work with the Council, other agencies and the community to ensure Tottenham Park Cemetery is made safe. We want members of the community to safely visit and pay their respects to their loved ones.”

T-VINE Magazine also contacted Mr Lowe for comment. He explained that after the council had sent a team of four to inspect the site on Friday 16 February, the landowners were advised to take immediate corrective action. He confirmed that the hazardous spire on the disused chapel had been removed within the five-day deadline set by the council and HSE. Tiles on the chapel had also been removed to alleviate the stress on the roof.

Mr Lowe said the ongoing closure was due to the “health and safety report” the company were given, which had also identified a tree on site that posed “a risk to life” and required urgent action. He said the cemetery had employed tree surgeons who “worked through the snow” to remedy these problems, logging unsafe trees and removing “four skip loads” of debris from the site. Details of these latest works “had been submitted to the council”.

Speaking to T-VINE’s editor late on Friday afternoon, Mr Lowe said: “We had hoped the council would have visited by now. We really wanted to get the cemetery open for Mother’s Day, but it’s not been possible. Given the council [and HSE] report, we need their [Enfield Council] specialist to come and sign-off the work of our tree surgeons. If anything should happen on site before that, our insurance policy may not cover any claim given the fact the report identified ‘a risk to life’.”

Terry Lowe: “We apologise to everyone that we won’t be open for Mother’s Day”

He added, “We’ve been told the council’s tree specialist will meet with us on Monday and inspect everything then. We apologise to everyone that we won’t be open for Mother’s Day. It’s out of our hands.”

When asked about his views on the council’s statement, Mr Lowe said he had not seen it. Although the company was in regular contact with the local authorities about the works, the only message Mr Lowe said the council had sent was one asking they, “Tell people the council is not responsible for the cemetery, and to answer our emails and keep the public updated.”