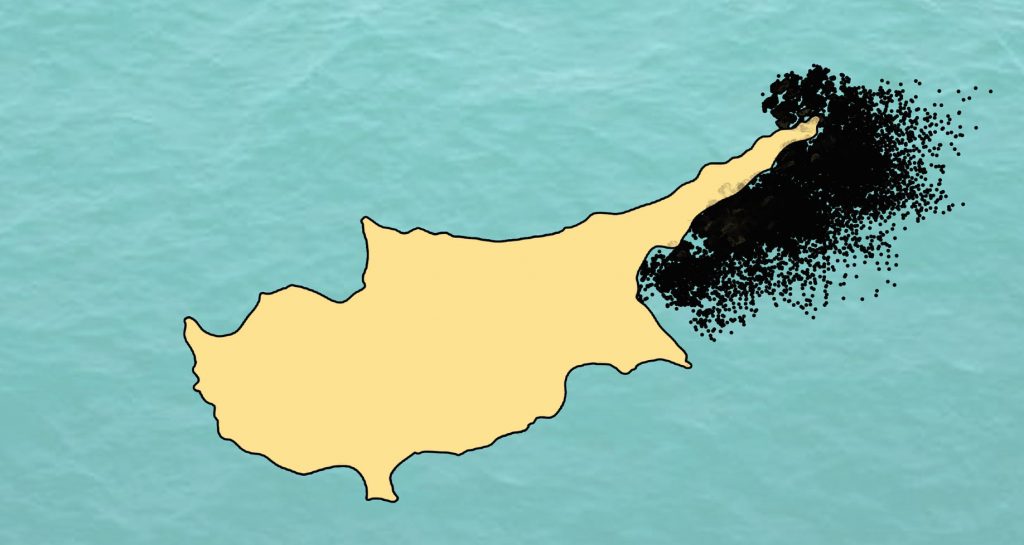 A massive oil leak from a faulty power plant in Syria continues to threaten the eastern coastline of the Turkish Republic of North Cyprus. The Turkish Cypriot government has turned to Turkey for help, while side-stepping offers of assistance from neighbouring South Cyprus.

Although the situation appears under control, changing wind and sea currents have started to push the huge oil slick back towards North Cyprus, Turkish Cypriot officials said on Friday.

If current efforts to contain the spill are unsuccessful, it could have a disastrous local impact, “irreversibly damaging the sensitive marine and coastal ecosystems” of the Eastern Mediterranean region, environmental groups and experts warned earlier this week.

Avli, a green pressure group comprising of Greek and Turkish Cypriots, is among those highlighting the dangers. They have called for the two governments in Cyprus to co-operate and for a region-wide response to the climate crisis.

The current emergency started twelve days ago, when the Syrian government confirmed there had been a leak from a fuel tank at the Baniyas oil refinery, on the northwest coast.

Twenty four hours later, on 25 August, Syrian media reported that the oil spill had travelled north along the coastline to the town of Jableh, some 20km (12 miles) away. The Syrian authorities quickly launched an emergency operation to mop up the oil covering coastal rocks and sea surface.

The huge slick, estimated to be around 20,000 tonnes by the World Wide Fund for Nature (WWF), also began moving west across the Mediterranean Sea towards Cyprus.

TRNC PM Ersan Saner: “No-one should doubt that whatever is necessary will be done to prevent our country from being harmed by this spill”

Satellite imagery taken on Monday showed the oil spill nearing the TRNC’s Karpaz Peninsula, which lies about 130 km (80 miles) away from the Baniyas refinery.

Under pressure to act, the TRNC government set up a multi-ministerial crisis desk to manage the Turkish Cypriot response to the oil spill. They also sought assistance from Ankara, asking for specialist equipment to be sent to help contain and remove the slick.

“No-one should doubt that whatever is necessary will be done to prevent our country from being harmed by this spill,” Mr Saner stated on Monday.

Separately, Fuat Oktay, Turkey’s Vice-President, told the Anadolu news agency that they were “mobilising every means available that we have without giving any chance to the spill to turn into an environmental disaster”.

The aim was to control the slick in the open sea, preventing it from reaching and devastating the coast of North Cyprus.

The Greek Cypriot authorities have said they are also ready to help if required. While their Turkish Cypriot counterparts have kept them updated of developments, there has been no joint effort.

The WWF told TRT World that the oil spill could have “potentially devastating” consequences for marine biodiversity and ecosystems along the coastlines of Cyprus and Turkey.

“The recent accident represents a further reminder about the major risks associated with hydrocarbon extraction and processing in the semi enclosed basin of the Mediterranean, which does not allow the dispersion of oil pollutants and where the consequences of such accidents can cause long-term negative effects on coastal ecosystems and communities,” WWF said.

Avli raised similar concerns in a statement it issued on Tuesday. The bi-communal environmental pressure group was launched by Turkish and Greek Cypriots last year with the aim of “preparing Cyprus [to] address the most critical issue of our time, climate change.”

North and South Cyprus “hamstrung” by the island’s political situation

Concerned by the lack of political co-operation across the Green Line on this and other natural disasters, including the recent devastating wildfires in South Cyprus, Avli has called on “both sides of the divide [to] rise up to the occasion and immediately coordinate a response to the Baniyas Oil Spill.”

The group noted in its statement that “potentially thousands of tons of oil are on their way to blanket the east coast of Cyprus, with some of it already reaching Dipkarpaz/Rizokarpaso, irreversibly damaging the sensitive marine and coastal ecosystems of that region.”

New satellite imagery analyisis by @EOSOrbital using Sentinel-1 indicats that the #Baniyas oil spill seems way larger than anticipated, with almost 1000km2, though visual IDing is need to see if and how big the oil sheen is h/t @HarelDan pic.twitter.com/eqDK1vdD0D

They accused the governments in the “Eastern Mediterranean and the Middle East, including Cyprus” of “prioritising conflict and the pursuit of profit at the expense of health, safety, and the environment.”

Avli lamented on the fact that “no country in the aforementioned region has embraced the revolutionary potential of renewables” and were instead all continuing to burn fossil fuel.

They called out the “lack of a coherent plan for cooperation between the two sides in the face of various crises” pointing to how “the administrations in the north and the south of Cyprus are once again hamstrung by the political situation on our island.”

Neither side currently recognises the other. Despite TRNC President Ersin Tatar calling for “normalisation” of relations between the two sides, co-operation is limited and primarily conducted via the United Nations and bi-communal technical committees.

Avli said the lack of co-operation had been most keenly felt “over the past years with the deadly wildfires which have left behind burned land and destroyed ecosystems.”

Earlier this summer, President Tatar had offered to send firefighters to help with the emergency effort against the deadly forest fires in the South. The offer was refused by President Anastasiades who preferred to wait for regional help from Greece, Italy and Israel.

The political division have again come to the fore over the latest environmental disaster. Avli noted that while the two “Cypriot authorities have been aware of the oil spill since 26 August, plans to take action only emerged on 31 August.”

They highlighted the fact Greek Cypriots have an oil spill response vessel (Alexandria) and “other technical equipment and expertise to handle the crisis”, Turkish Cypriots opted “to ask for help from Turkey.”

“Every person in Cyprus, directly or indirectly, is dependent on our island’s sensitive ecosystems. We deserve a response that prioritises our island first, and sets political agendas aside,” the group stated.

Avli took a swipe at “political elites” in Cyprus, who are wedded to “the senseless strategy” of “offshore drilling in those same waters” that are currently being threatened by the oil spill.

The group also criticised Cyprus’ “green” and “socialist” political parties, which “have done nothing to advance environmentalism” and have instead “embraced the hydrocarbon projects, contributing to the commodification of our common sea.”

Cyprus’ youth-driven environmental group claims, “There is no such thing as a “natural” disaster anymore. Every wildfire, every drought, every square kilometer of nature destroyed, is a result of political decisions or inaction and our politicians have all been complicit in this regard.”

Noting “the worst wildfires on record” and “the worst drought in 900 years”, Avli called for “a coordinated and region-wide response to the climate crisis”. They said this was needed to overcome the “rampant conflict and instability in our region”, which is “a recipe for climate disaster”.

Avli called for “a drastic change” between the two sides, who should put aside “the politics of mutually assured destruction”, and instead embrace “a policy for the future, one that prioritises health and safety over the pursuit of power and profits.”

They urged “the administrations on both sides of the divide [to] rise up to the occasion and immediately coordinate a response to the Baniyas Oil Spill.”

The group ended its statement with a demand “for a public commitment for the protection of our common natural heritage, with specific emergency response plans for different types of disasters (wildfires, oil spills etc), as well as a joint declaration cancelling hydrocarbon exploration projects combined with a commitment for an island wide decarbonization strategy.”