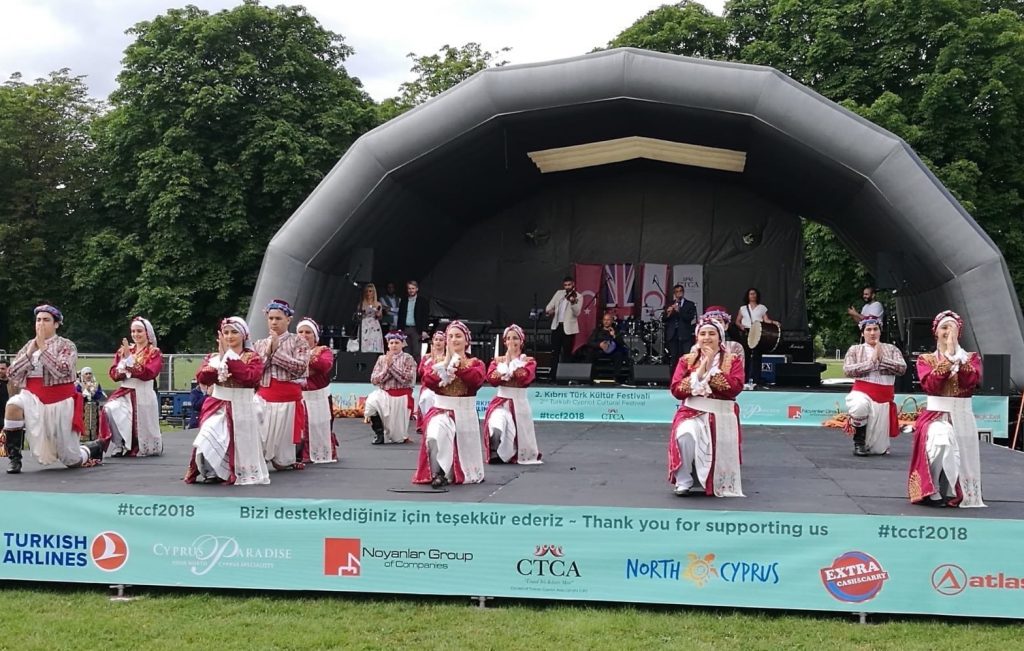 Competing plans to hold separate June festivals celebrating Turkish Cypriot culture on the same day in north London have been averted after one of the camps decided to postpone its event by a week.

In a surprise move, the UK-based Council of Turkish Cypriot Associations (CTCA), an umbrella organisation representing nearly 30 non-governmental organisations, announced on Tuesday that it now aims to hold its third annual Turkish Cypriot Cultural Festival on Sunday, 30 June 2019, instead of 23 June.

The original date and details were first announced at the end of last year, as previously reported by T-VINE. The event will still take place at the Enfield Playing Fields off Donkey Lane, the CTCA stressed.

“Even though we were the first organisation to announce our festival date in December 2018, we were shocked and disappointed to learn that another Turkish Cypriot festival [organiser] declared in February 2019 that it was going to take place on the same day,” a CTCA statement sent to T-VINE said.

“Despite all our efforts to reason with the other organisers to either reschedule their event or to join us and combine our efforts to organise and hold one festival for the benefit of our community, they declined and did not respect that the CTCA UK had announced their date first.”

The CTCA date change decision came after another group of Turkish Cypriots confirmed earlier this month that it too was planning to hold a festival on 23 June, just two miles away in Edmonton.

The Cyprus Turkish Culture and Arts Festival, backed by the Cyprus Turkish Community Centre (TCCA), Turkish Football Federation (UK) and other groups which are not part of the CTCA, will take place for the second year running at the smaller Lee Valley Athletics Centre on Meridian Way.

Two months after CTCA UK announced its festival was taking place on 23 June 2019, TCT confirmed their event would be on the same day

They confirmed their 23 June date via the “Turkish Cypriot Trust” (TCT) UK Facebook page on 7 February.

Referring to “bullish behaviour” by the second festival camp, the CTCA said that it had made the “difficult decision to change the date of the event” in the “best interests of the community” despite “being two months into preparations for the festival and already having spent a great deal of time, money and energy.”

The body, whose members include Turkish schools, a women’s group, cultural heritage associations, Turkish Cypriot lobby groups and the UK’s oldest Turkish mosque, claims that its aim was “always to unite our people and not divide” the community and felt that the only way to avoid “a compromising or difficult situation” was to change their date.

Last year’s festivals were held on separate dates in June, albeit just a week apart, but negotiations to avoid a direct clash this year – or to hold a single festival instead – initially failed due to disagreements between the rival camps.

It is not clear why organisers of the Cyprus Turkish Culture and Arts Festival chose 23 June as the date for their event.

Some sources claimed that it was the only date available at the Lee Valley Athletics Centre. However, an email seen by T-VINE, dated 18 February 2019, revealed that the Lee Valley Athletics Centre, whose outdoor track area can accommodate up to 2,950 people at any one time, was still available for booking for Sunday 30 June, depending on the nature of the proposed event.

The date of 7 July had also been available according to a response to an earlier online query, dated 16 January.

Ertanch Hidayettin, speaking on behalf of the TCT, declined this week to answer questions from T-VINE.

He said that the “TCT Festival Committee” would instead hold a press conference on Thursday, 28 February, when it will “provide answers to the questions posed”.

Furious Leyla Kemal, chair of the CTCA – also known in Turkish as “Konsey” – had described the decision to hold a second festival on the same day as her organisation’s event as “unbelievable”.

In a scathing statement sent to T-VINE before her latest announcement, she accused the Lee Valley festival organisers of creating “division” within Britain’s Turkish Cypriot community.

“It’s unbelievable. This is not a mature action and it is wrong. This will create division in our community. They are doing it on purpose,” she said.

Mrs Kemal added that she has been subjected to “several sexist approaches” including one she said was made by a North Cyprus-based newspaper columnist.

She had “no respect” and “no trust” in her opposite numbers, she added, “based on our experience with them in 2017 and 2018” and accused them of telling “lots of lies”.

“As Konsey we had the vision in 2017 and organised the first [festival],” Mrs Kemal added.

“The last two years we did it successfully. And yes, it is possible to do one festival if they come and walk with us.

“They can join the festival committee and give their ideas, help in any area they want to. We offered them a page in [our] festival magazine, with their logos, as we do the same for our member associations.

“If they want to be part of it and help this community they should come unconditionally.”

She continued: “If they want to do another festival, they can do it in a different name. Just give a break of four to six weeks or do it in September, we can help them and walk together…

“When we asked them in 2017, they didn’t want to take the risk to join us because they would lose money.

“We took that risk and we put our money and we managed successfully. Then they wanted to join in 2018 but they kept asking to change conditions they agreed before. So it didn’t work out.

“Their festival wasn’t successful last year, they made a loss. Why would we join them just for the sake of saving their festival? Our one was successful. Would a good business merge with an unsuccessful one? What is the benefit?”

Mrs Kemal said that funds raised from the first two CTCA Turkish Cypriot Cultural Festivals – which she said had the backing of the Turkish Republic of Northern Cyprus (TRNC) government – through sponsorship and other means, have been put aside in a fund set up to purchase a “community building”.

She said figures for the amount of money raised from the 2018 festival would be revealed at the CTCA’s annual general meeting on 10 March, once it has been checked by auditors.

The 2017 event raised “around £10,000”, she said, and invited the TCT Festival Committee members to inspect the CTCA accounts.

“Our accounts get checked by independent people at the end of every year, not just by our treasurer,” she stressed. “There are three people, they can put three more.”

Top Turkish Cypriot businessmen in Britain have also been drawn into the dispute, with one organisation calling for a single festival.

Cyprus Turkish Chamber of Commerce (UK) chair and Cyprus Premier Holidays chief Muhammet Yaşarata issued a statement on 1 February calling for a combined cultural festival, but raised tensions by seeming to blame the CTCA for the initial impasse.

The CTCA then issued a counter-statement demanding Mr Yaşarata’s resignation, claiming that his comments had not been signed off by Chamber board members – an accusation denied by Mr Yaşarata, who said he had “approval from the CTCC board to make this announcement”.

“This is the decision taken by the Board of Directors as announced in a recent press release. However, if there continues to be two separate festivals, the Cyprus Turkish Chamber of Commerce UK will continue to adopt a neutral stance on the matter.

“But I firmly believe if the organisers of these festivals could join together, communicating directly face to face, rather than addressing [each other] through social and the media publicly, the festival could become a combined success.”

Mr Yaşarata was backed by Chamber of Commerce board member Tuncel Nalbantoğlu, owner of Vatan Catering, who said he agreed with the call for a single festival and supported Mr Yaşarata’s statement of 1 February.

He had told T-VINE that holding two festivals on the same day would be a “disaster” for the Turkish Cypriot community.

“I’m talking to both parties, I know them very well they are friends of mine,” he said before the CTCA’s date change announcement.

Mr Nalbantoğlu accused TRNC officials of stoking the spat by “intervening” in the affairs of the diaspora.

“They mustn’t intervene in the Turkish [Cypriot] people in this country,” he continued. “We are completely separate. They have let us down many, many times. If there hadn’t been any intervention from the TRNC, there wouldn’t have been any problem.”

He continued: “If we come together we [will be] stronger, and we can help the TRNC and the TRNC can help us. [But] because we are divided that’s not going to happen.

Ukay Catering proprietor Işık Vedat, another Cyprus Turkish Chamber of Commerce UK board member who is also the CTCA Vice-President, told T-VINE that he had been “very upset” by Mr Yaşarata’s February 1 statement and stated that it had not received unanimous board support.

Mr Vedat said that he had been on holiday when he first learned of the statement and had asked for it to be delayed by a week so he could have more time to “establish what the reasons are” that were preventing both organisers coming together for a single festival, but that it was then circulated to the media without further discussion.

He said he did not think it was appropriate, however, for the CTCA to call for Mr Yaşarata to step down as Chamber of Commerce chair.

TRNC London representative Oya Tuncalı said that while she was trying to play a “positive role” to help the two festival teams come to an agreement, she was in favour of a “unified”event, in comments previously quoted by the Cyprus Today newspaper.