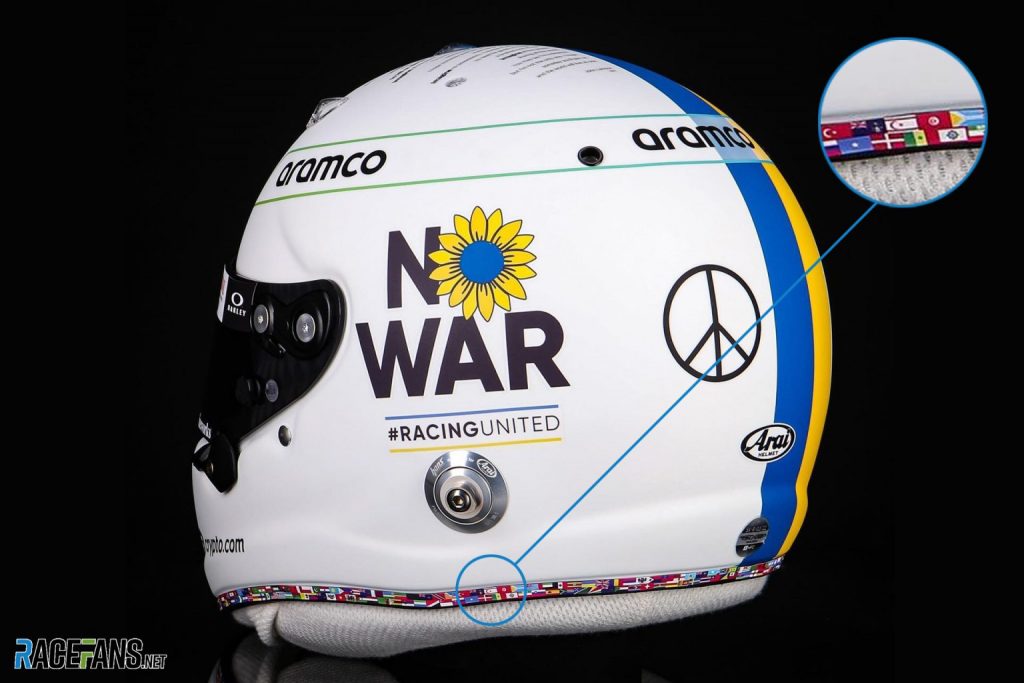 On 10 March, the team behind four times Formula 1 World Champion driver Sebastian Vettel unveiled his new helmet. The words “No War” were blazed across one side, a dove on the other, with narrow strips of flags adorning the base of the helmet.

Blue and yellow stripes – the colours of Ukraine – ran down the back of the helmet, with the same colours used for a sunflower that took the place of the letter ‘O’ in the word ‘No’.

The German driver’s bold message of solidarity with the Ukrainian people as they battled against the Russian invasion was clear for all the world to see, resulting in pictures of the helmet being splashed in mainstream media everywhere.

One eagle-eyed person soon spotted that one of the 250 flags on Vettel’s helmet was the flag of the Turkish Republic of North Cyprus (TRNC). A blown up image of the TRNC flag on the side of the helmet quickly went viral.

For Turkish Cypriots, the inclusion of their flag as part of such a hugely symbolic global message about Ukraine was a moment of pure joy.

“Suddenly, tens of millions of people previously unfamiliar with the Cyprus dispute, let alone what the TRNC flag looked like, were peering closely at both”

For the Greek Cypriot lobby, it was time to get into overdrive and complain to the Formula 1 authorities, and to Vettel and his Aston Martin team about using the flag of an unrecognised country.

Leading the charge was the Greek Cypriot motoring body, the Cyprus Automobile Association (CAA), which filed an official complaint with Formula 1. In a statement issued on Friday, 11 March, the CAA said:

“Vettel’s decision of sporting the pseudo-state’s flag on his helmet is unacceptable,” adding, “We demand the immediate removal of the flag from his helmet and the imposition of a penalty on both the driver and his team.”

Twenty four hours later, when Vettel next came out for a practice run, all the flags on his ‘No War’ helmet had been removed.

Responding to the furore, Vettel told media: “Around the bottom there’s just the opportunity as a small sign to have all the flags of the world.

“I didn’t control it, I didn’t check all the flags, but apparently there was some issues, some minor ones.

“I took the little sticker off because some people got upset, which I think fails the message – the message is that obviously the whole world should be united and is united, I think, to fight war.

“I think we grew up in times of peace and I think we appreciate peace a lot.

“It’s like a nightmare, a shock to see the images and to see what’s happening in the news.”

The developments saw a reversal in responses from across the Green Line. Now it was the turn of Turkish Cypriots to groan, while there were cheers in South Cyprus for their latest “victory” in getting the TRNC flag removed.

Yet one Turkish Cypriot group was quick to point out the benefits of this unexpected helmet publicity. The Young Turkish Cypriots (YTC) described the CAA complaint as “dumb” and that “many more people around the world are now aware” of the TRNC flag.

“The only message of these more than 250 flags is to underline a world-wide united stand against war and to stay together as one.”

The Greek Cypriots’ demand for the removal of the TRNC from Vettel’s No War helmet made global headlines in major racing media such as Auto Sport, F1i, Motorsport Week, and Racing Fans, and many other newspapers worldwide.

Suddenly, tens of millions of people previously unfamiliar with the Cyprus dispute, let alone what the TRNC flag looked like, were peering closely at both.

The UN currently recognises 193 states, so over a fifth of the flags included on Vettel’s helmet were from non-recognised nations. They were bought from a stock library by the designer Jens Munser, who explained in a statement:

“The only message of these more than 250 flags is to underline a world-wide united stand against war and to stay together as one.”

While Munser apologised for not checking “every single flag and their political history thoroughly”, he, like Vettel, took care not to mention the TRNC by name. For the pair, the message of global unity against the war in Ukraine remained paramount.

The Greek Cypriot objections have, however, have again polarised the two sides in Cyprus, with even ardent pro-unification supporters like journalist Ulaş Barış commenting on how peace with Greek Cypriots was impossible.

“Latest situation: Go on son. Vettel has removed the TRNC flag on his helmet. The Greek Cypriots complained. There can be no peace with them.”

YTC also condemned Greek Cypriots for choosing to focus on removing the TRNC flag – an inescapable part of Turkish Cypriot identity – then unite against war.

In its statement, called “A message to the Cyprus Automobile Association”, YTC summed up the feelings of pretty much all Turkish Cypriots:

“Sebastian Vettel’s “No War” helmet carried 250 flags. The UN recognises 193 countries. The only people to complain against this brilliant action and universal message for global peace were Greek Cypriots.

“You don’t represent Turkish Cypriots or North Cyprus, and your desire to erase our existence is both spiteful and racist.

“2 states exist for a reason in Cyprus, and thanks to your dumb complaint, many more people around the world are now aware.”