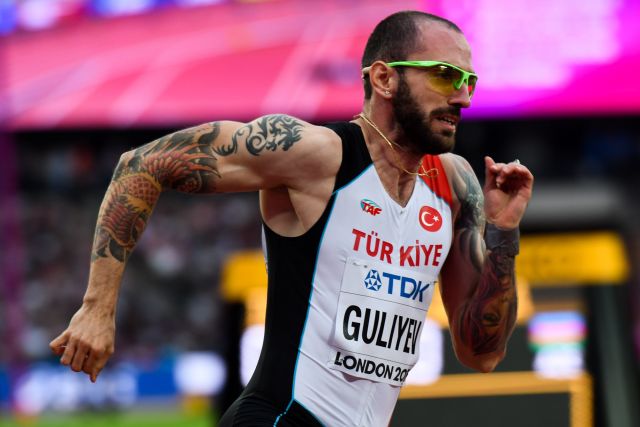 Azeri-born Ramil Guliyev shocked the pundits by powering to victory in the final of the Men’s 200m race last night, winning his adopted country Turkey its first-ever gold medal at a world athletics championships in the process. Guliyev beat favourite South African Wayde Van Niekerk, who came second, in a thrilling race in a time of 20.09 seconds, just ahead of his rival who finished on 20.11sec.

Guliyev, who switched allegiance to Turkey in 2011, had ran well in the heats of the 2017 IAAF World Championships in London leading up to Thursday’s final. The big race had Guliyev drawn in lane 5, while Van Niekerk was running on his inside in lane 3, and Botswana’s Isaac Makwala, who had posted the year’s fastest time of 19.77sec in July, running in lane 6.

All three men had a good start. However Makwala, who was recovering from a bout of illness, started to fade in the second half of the race, leaving Van Niekerk marginally ahead of Guliyev. The Turkish athlete made up ground in the final metres to pip the favourite on the line. Trinidad and Tobago’s Jareem Richards came third.

After the race, Guliyev told media: “This is not a shock but this does not feel real. I am so proud. This title means a lot. I delivered my best race at the right time. I’m so happy to be world champion. This is the best moment of my career.”

It was the first 200m in a decade that did not feature athletics legend and 200m world record holder Usain Bolt, leaving the field wide-open. Van Niekerk, who had won gold in the 400m earlier this week, was aiming to be the first athlete to win the 200m-400m double since American athlete Michael Johnson. But Guliyev, who had won the European Juniors 200m title back in 2009 and was also crowned the World University Games 200m champion, had other ideas.

“I do not feel any difference between Azerbaijan and Turkey, the language and culture are the same in both countries”

Although his winning time was the slowest in a 200m final since John Capel won in 20.30sec in 2003, Guliyev had been among the main 200m contenders for the past 12 months. The 27-year-old has a personal best time of 19.88 – a national record he set in 2015. Last year, he won a silver medal at the same distance at the European Championships last year and in July he easily won the Men’s 200m – IAAF Diamond League meet in Paris.

After triumphing in London last night, Guliyev carried both the Azeri and Turkish flags around the stadium. He had previously explained that he switched nationalities to Turkey as there was “there’s not much enthusiasm for athletics in Azerbaijan and there’s no good facilities.” Officials in his home country, angry at losing their rising star, placed a block on his career by insisting that the International Association of Athletics Federations (IAAF) make Guliyev serve all of his two-year waiting period before he was allowed to compete for Turkey.

During that time Qatar also offered to adopt the talented sprinter, with both countries offering him considerable financial support – Guliyev’s current monthly wages is said to be equal to an average worker’s annual salary in Azerbaijan. In the end, Turkey’s climate and location won through: “I do not feel any difference between Azerbaijan and Turkey, the language and culture are the same in both countries”.