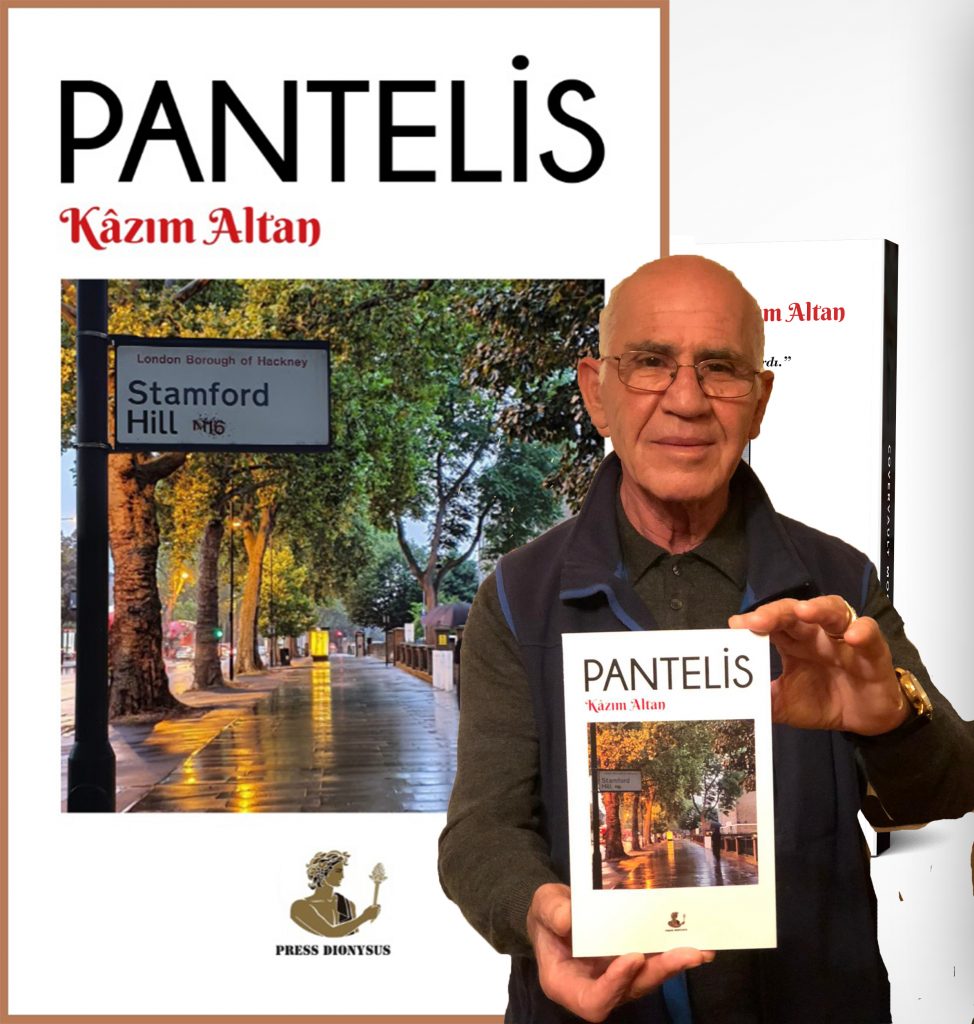 This week is Mental Health Awareness Week in Britain, making it the perfect time to put the spotlight on Pantelis – a trilogy on mental illness.

The debut work of Turkish Cypriot author Kazim Altan, it captures the struggle of immigrants in a strange country, and their feelings of estrangement, disappointments, loss, upset and, naturally, of love too.

The book takes its name from the central character Pantelis,who features in the first of three longish short stories. The second story is Gillian’s, and the third is Patryk’s.

Each fictional story, complete in itself, is interwoven with the others; characters who wink at the reader in one story are developed in the next. As their tragic lives enfold, they recount the same events from their own perspective.

Of Greek Cypriot and Turkish Cypriot parentage, Pantelis travels through life, back and forth, between London and Cyprus, his consciousness and social environment shaped by tragic political events and history beyond his control.

Yet Pantelis “is more than a tragic love story”, explains Altan in his press notes. Pantelis’ story “is also about the lives of migrants trapped between material need and loss of identity and culture in a foreign land.”

“Combining two different cultures is always a struggle, as is earning enough on a minimum wage. I believe the universality of Pantelis’ character resonates. It makes him feel real.”

The stories of Gillian, and Patryk also depict their life experiences, both positive and negative, with the characters freely displaying their frailties and human qualities.

“Working through the topic of mental wellbeing was not easy.  But it was interesting.  The suffering displayed in the book is not chic. But living it through the characters of Gillianne and Patryk, and their family and friends could be informative for a lot of us.”

“In Pantelis, we experience diligence, in Marianne, grace and sensitivity. In Patryk, we strive to understand the causes of the seemingly ‘irrational behaviour’ of a perfectly rational, intelligent man.”

Altan’s depictions of mental illness reflects the complexity of mental wellbeing. We all experience, for example, sadness and rage, and a few of us even insanity. For those suffering from mental illness, these are often common expressions of their illness, but they are not in themselves a disorder.

There are lots of different types of mental illness. Some disorders, such as depression, anxiety, and dementia, are very common affecting tens of millions of people. There are also rarer afflictions, like Alien Hand Syndrome (the belief that one’s hand “does not belong to oneself, but that it has its own life).

The forms mental illness takes can be complex and not always easy to recognise.

It may be easier to think our mental wellbeing as a spectrum that we all sit on. We can be at the healthy end, where we are content, happy and at ease. Those in the middle are facing mentally taxing challenges, forcing their state to be described as coping, struggling, or perhaps surviving. Those at the far end are suffering from one or more mental disorders.

For our entire lives, we will all move along this mental health spectrum, sometimes doing better or worse depending on our personal circumstances and the help available to help us overcome mental illness. Of course, that requires society to understand better and be willing to offer support.

Altan has spent long years in the education sector and has been a keen observer of the society around him. He found that in his adopted home Britain, like his native Cyprus, “mental illness is a stigma and families affected by it are keen to keep it a secret.”

Indeed, many people have a tendency to hide mental illness to avoid being labelled. Altan believes that as a community, we need to accept that mental illness is capable of striking any one of us at some point in our lives. It is as “normal as having a common cold,” he states.

According to Mind, one in four people will experience some form of mental illness in any given year

Research by British mental health charity Mind found that one in four people will experience some form of mental illness in any given year. That statistic increases in societies and countries which have endured conflict, such as Cyprus.

“I have encountered friends in higher education, at the Lycee in Cyprus and in my language classes among learners young and old, who managed to escape unimaginable trauma in their war-torn countries” said Altan.

The author has pledged the profits from the sales of Pantelis to the Hospital of Mental and Emotional Wellbeing in the North Cypriot capital Lefkoşa / North Nicosia.

“In [North] Cyprus, to my knowledge, there isn’t an association equivalent to Mind, which can provide support for individuals and families affected by mental illness. I hope that the donation from the profits of this book can be used by this institution to set up a voluntary service to support patients and relatives.”

Published by Press Dionysus at the end of 2020, a paperback copy of ‘Pantelis’ A trilogy by Kazim Altan can be obtained for £10 from Fieldseat Café, 665 High Road, Tottenham, London N17 8AD. Alternatively you can order online from pressdionysus.com.

About the author Kazım Altan

Kazım Altan was born in the village of Ayia Varvara in Cyprus. He completed his secondary education at Kurtuluş Lycee in Paphos and in September 1963, he came to London with the intention of studying law. By the end of that year, Cyprus was in turmoil and, inevitably, financial support ceased.

He worked his way through further education, studied Sociology and Politics at MSc. level, and earned diplomas in Teaching English as a Second Language, Counselling, Educational Management, and ESOL Teacher Training. He enjoyed teaching, excelled in management and the quality of his work was noted and praised by The Office for Standards in Education and Training.

He retired from his job as Assistant Director, but felt retirement came too soon, so he joined Trinity College Examinations Board and worked as an English Language Examiner for several years.

Kazım enjoys writing and loves to combine it with performance. He has appeared in several shows at Arcola Community Theatre in Dalston, East London, acting characters that he created. His theatre training culminated in a principal role in Ensemble 17, a musical play, written and directed by Jude Alderson, which showed at the Camden Fringe Festival in July 2017. He has also written a play based on Pantelis, which has some dancing in it. Sovronia dances to the tune of Adanalı, sung in Turkish and Greek.

In his mid-years, he spent a lot of his time setting up and establishing a supplementary school for Turkish speaking children as well as a welfare association offering advice, counselling and support for the elderly. He did this alongside his full-time job. Not surprisingly, his children thought he was ‘no fun’ as a dad and that hurts even though it rings true! Kazım takes comfort in thinking he is a better grandad to two clever girls and two sensitive boys.