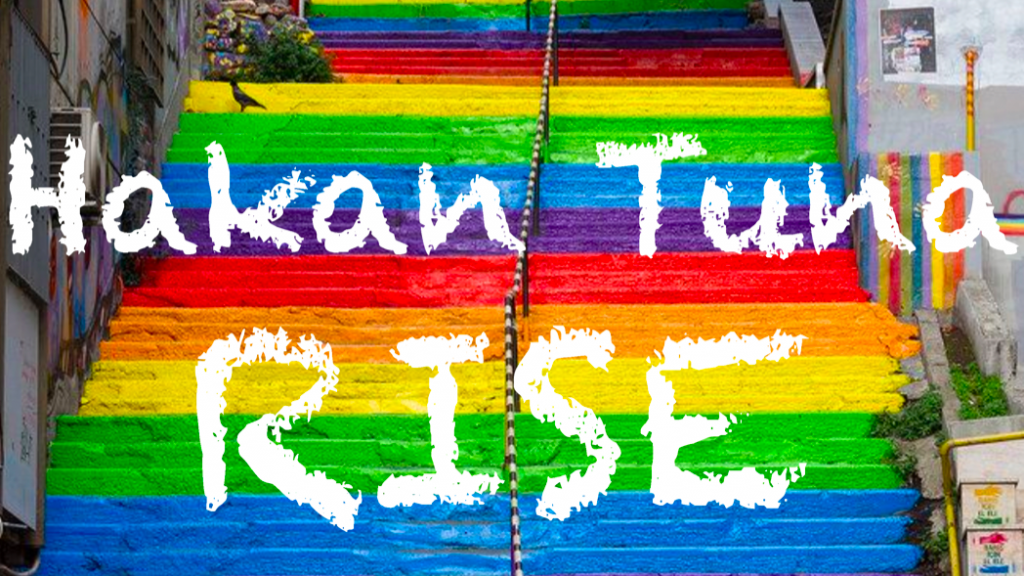 Rock musician Hakan Tuna has returned with his fourth release, Rise, from his 2021 project ‘12 songs 12 stories’. This track takes us back to an early part of Hakan’s life.

By the age of 17 Hakan always knew that music would be his passion in life. He had been playing keyboards for around three to four years and was 100% self-taught.

Hakan spent his spare time recording demos on his 4-track Amstrad Studio and by the time he had finished with it he had nearly 100 demo tapes.

A typical Turkish teenager Hakan was not. While others were more interested “looking and smelling good” Hakan was busy forging his own individual style.

He worked with family at a hairdressing salon and it was during this time that he found a kinship with a new apprentice that also started working there, Jon Spong.

“Jon would dress differently and was an individual who did not follow the herd. This was refreshing to me as I was also like that, but never came across many others like me at that time. I had found my long-lost brother; I entered a world of squats and music, but at that time Jon had not revealed his musician side to me that much,” Hakan wrote on his press notes for Rise. The two hadn’t seen each other for a good long while, but Hakan knew that Jon was now part of a band. One Friday evening, Hakan tuned into The Word and saw his friend performing live on national television with his band Natural Life.

The band’s sound is described as “90s dance music meets rock music with an element of Santana to it,” according to Hakan.

He was happy for his friend and the success of Natural Life, and yearned for something similar, but Hakan was stuck working in his brother’s dry cleaning store.

In early 1992, the young Turkish Cypriot from South London received a phone call from Jon asking if he could take over keyboard duties for Natural Life; their first gig was only two days away and the band was in dire straits. Hakan jumped at the opportunity.

The record company immediately couriered the album to him, so he could start learning to play the songs prior to the concert and so began Hakan’s time with Natural Life.

It all happened so fast: there was no time for rehearsals with the rest of the band, with Hakan first performing the songs “on the way to the first gig on the bus”.

The popularity of Natural Life saw them achieve Top 40 chart success, and the next nine months was full of touring, recording and releasing new songs. The experience helped to expand Hakan’s own approach to music.

Natural Life ended up performing at some amazing venues, including the Marquee Club in London and major festivals such as Glastonbury and Reading.

Hakan remembers “walking down one of the parade of stalls, [and] someone had bootlegs of our concert (and all others on the bill) and was selling bootleg cassettes of the show”, reflecting how popular the band had become.

Natural Life had recorded lots of new material, which they planned to feature on their follow-up album. One of them is called Rise. It was Hakan’s favourite song and, this being in the pre-internet era, it wasn’t easy for fans to listen to unreleased material. Yet when they played the Reading Festival “the whole front row was singing along to the unreleased RISE, [which] really blew our minds at the time.”

Rise is an upbeat song with beautiful and empowering lyrics that flow well with the smooth and synthy-electronic melodies.

Natural Life were short lived due to a restrictive record contract. Hakan left the band first and shortly after the rest of the band disbanded. The situation “convinced” Hakan that “these people (record labels) are anti music.”

In early 2020, the band was invited to play a charity concert and they all agreed, but then the coronavirus pandemic struck, putting their reunion plans on hold.

Hopefully at some point in the not too distant future the band will reform and Hakan’s 17-year-old daughter can get to see her dad rocking out on stage.