55 years on: Remembering Cengiz Topel and the Erenköy Resistance 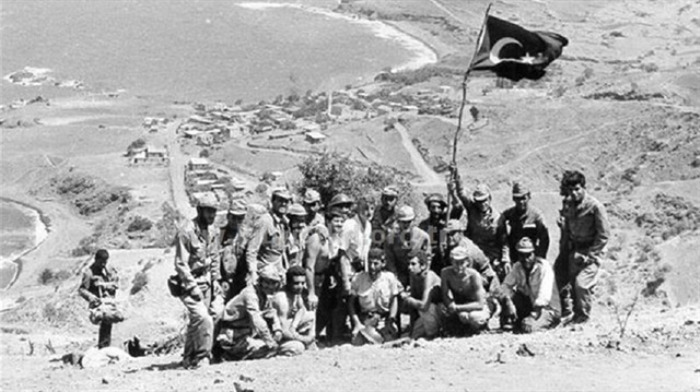 The struggle to survive has defined much of the recent history of Turkish Cypriots, with the Erenköy Resistance of 1964 among their most famous battles. A major milestone that occurred early on in the 11-year Cyprus Conflict, the Battle of Erenköy not only highlighted the bravery and resilience of the island’s minority Turkish community, but also the critical role of Turkey in safeguarding them.

The 8 August is known as Erenköy Resistance Day in North Cyprus. Each year, veterans and their relatives make the annual journey to the village, also known as Kokkina, located in northwest Cyprus, to pay their respects to those who defied all expectations to hold this strategically vital coastal outpost. It is also a time to remember Turkish troops, such as fighter pilot Cengiz Topel, who gave their lives to save Turkish Cypriots.

Today, Erenköy is officially a part of the Turkish Republic of Northern Cyprus. Just a few miles away west of Yesilirmak, it is, however,surrounded by Greek Cypriot villages, so visitors must enter the uninhabited village via the Republic of Cyprus or travel by boat.

The fishing village of Erenköy, which overlooks Morphou Bay, found itself a target of Greek Cypriots a month after the outbreak of the Cyprus Conflict, on 21 December 1963. In a brutal ten-day period that came to be known as ‘Bloody Christmas’, Turkish Cypriots came under fire aspart of the now notorious Akritas Plan, carefully crafted by the larger community in its bid to oust its Turkish partner from the Cyprus government by any means necessary.

Soon after the New Year, the capital Nicosia fell to the Greek Cypriot coupists, giving them full command of the island’s government and military resources. Hundreds of Turkish Cypriots who resisted this new state of affairs were killed or went missing, and thousands more were made homeless.

The conflict quickly spread to the rest of the island. The guns turned on Erenköy and the neighbouring Turkish settlements on 26 January.

Combined with other Turkish villages in the vicinity, such as Bozdag (Aytotoro), Mansur (Mansoura) and Selcuklu (Selaintapi), the total Turkish population in the Dillirga (Tillyria) area in 1963 numbered 1060. Many fearing Greek Cypriot attacks fled to Erenköy for their safety.

To a man they knew that holding on to this territory, with its 5 km long coastline and sea port – the only one in Turkish Cypriot hands – was of paramount importance to ensure vital supplies from Turkey got through. They were also vastly outnumbered and outgunned, with enemy forces encircling them on land.

Visitors to the now uninhabited village will find caves in the nearby mountains. These were dug during the conflict so Turkish Cypriots could escape the fierce shelling they regularly had to endure.

Cut off from the rest of Cyprus, the villagers and their mucahit (freedom fighters) desperately needed reinforcements to survive.

In January 1964, there was just 116 mucahit in Erenköy. A month later 20 more volunteers had arrived. As word got out via the Turkish Resistance Organisation (TMT) about the urgency of the situation, Turkish Cypriot students in Turkey and the UK were desperate to return home to join the Erenköy Resistance.

Initially Turkey, where some 700 students (two thirds of them male) were based, was against having students join the fight. The Prime Minister Ismet Inonu believed sacrificing the future leaders of Turkish Cypriot society was too big a price to pay. But the young students insisted they would not sit idly by and watch their families be killed.

Realising it needed to help or else these young men would arrive to certain death, the Turkish government ordered its military to establish a special training camp, so Turkish Cypriot volunteers could attend for up to a month. Here they were taught how to handle a gun and other basic tactics in warfare. Most spent at least a fortnight, some as few as four days at the camp. It was far from ideal, but this essential training proved crucial in their ability to hold the coastal enclave.

From Anamur in southern Turkey, the new recruits and weapons were carefully smuggled across the Mediterranean to Erenköy. Over 500 came this way: Turkish Cypriot students representing all political hues, including President Denktaş’s former undersecretary Ergün Olgun and the late Özker Özgür, who for a time led the left-wing Republican Turkish Party (CTP), putting their lives on the line to save the village.

Aware that Erenköy was central to the supply of arms and men from Turkey, its defeat became a military priority for the Greek side. Although UN peacekeeping troops, primarily from Sweden, were stationed in the area to prevent fighting, in essence they were powerless to stop a major offensive by Greek Cypriots.

Along with heavy artillery on land, Grivas was also able to call upon gun boats from Greece to join Cypriot naval patrol boats, then in Greek Cypriot hands, to shell the village. For several days they pummelled Erenköy with rockets, mortar shells and machine guns. It was difficult to believe Turkish Cypriots could survive the relentless bombing.

It was against this backdrop that Turkey, through its right as a Guarantor Power of Cyprus, decided to intervene by sending aerial support to the besieged villagers.

Fighter pilot Cengiz Topel was 29 years old when he was shot down on 8 August 1964 while flying over Cyprus trying to protect Turkish Cypriots trapped in Erenköy. He was Turkey’s first pilot to be killed in action.

Topel was born in Izmit in September 1934. The third youngest of four children, he lost his father when he was a young child. His family moved to Istanbul and after a short spell at a regular high school, Topel entered Kuleli Military High School, graduating in 1953. Two years later he joined the army and became second lieutenant after completing the Turkish Military Academy.

He joined the Turkish Air Force, and was sent to Canada for training. By 1961 he became 1st Tactical Air Force Command at Eskisehir Air Base. Within two years, Topel was promoted to the rank of Air Force captain. Everything about his career glistened.

He was selected to lead a small squad of fighter pilots for the Erenköy mission. Leaving their Eskisehir base at around 5pm local time, they successfully bombed Greek Cypriot military targets on land and at sea, preventing them from reaching the village.

After his F-100 Super Sabre craft was hit by anti-aircraft fire, Topel was able to eject safely from the plane and parachute land by Peristerona, a few miles from Bostanci. Disorientated, he sadly headed towards Greek villages and was captured. He died a brutal death after being severely tortured by his captors, Greek Cypriot National Guards, who were desperate to learn Turkish military secrets. They handed over his battered body to the Turks on 12 August.

On 9 August, Turkey significantly increased its aerial bombardment of the Dillirga region, sending 64 aircraft and a clear warning to Greek Cypriots that this was one battle they could not win. The show of force worked. Twenty-four hours later a ceasefire was declared.

Topel’s bravery, and those of the Erenköy mucahit, who numbered less than 750, meant the village was indeed saved.

Ten Turkish soldiers and mucahit were killed in action, with 23 injured. The casualties for the Greek Cypriot side, cited by Pierre Oberling in his 1982 book The Road to Bellapais, was considerably more: 53 dead and 125 injured.

Yet the war for Erenköy villagers, like Turkish Cypriots in other enclaves, was not over. For ten more years, they continued to endure harsh conditions as they remained encircled by Greek Cypriots who would mount occasional attacks. It was not until Turkey militarily intervened again in Cyprus, on 20 July 1974, that the conflict would finally end.

Cengiz Topel was the first Turkish pilot to die in action. To recognise his heroic efforts in 1964, a hospital in Yesilyurt, near Lefke, was renamed the Cengiz Topel Hospital in 1975. A statue was also erected in his honour in Eskişehir, Turkey.

The sacrifice made by Cengiz Topel and others who formed part of the Erenköy Resistance remains a beacon of light for North Cyprus and its Diaspora that despite immense hardship, when Turkey stands with Turkish Cypriots, they can triumph against all the odds.