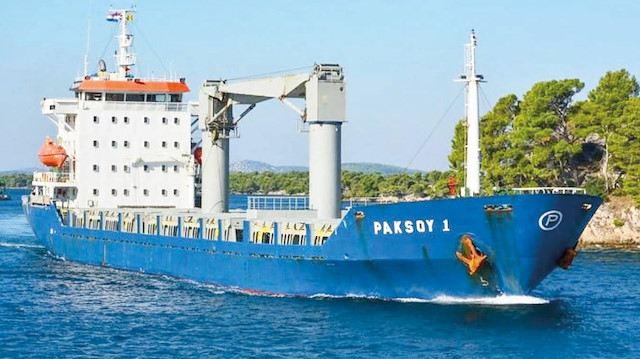 Ten men kidnapped while working on the Turkish-flagged ship Paksoy-1 that was sailing from Cameroon to the Ivory Coast have been freed. They were reconciled with their families after flying into Istanbul Airport earlier today, Sunday 11 August – the first day of Kurban Bayramı.

The men, who are all in good health according to a report by the Anadolu Agency, spent nearly a month in captivity after pirates boarded their ship on 16 July while they were sailing along the Gulf of Guinea, from Douala in Cameroon  to Abidjan in the Ivory Coast. The incident occurred off the coast of Nigeria.

According to company director Numan Paksoy of Kadıoğlu Maritime, which operates Paksoy-1, the container ship’s eighteen crew tried to hide from the dozen or so heavily armed pirates in the safe room on the ship. However, the pirates “threatened to burn the ship and kill all of them”, Mr Paksoy told media.

After the crew emerged from the safe room, the pirates abducted ten of them while leaving eight sailors free on the ship. The remaining Paksoy-1 crew sailed on to Ghana and docked in the port of Tema, unsure where their colleagues had been taken or their fate.

It took a week for Kadıoğlu Maritime negotiators to reach the pirates, who were after a large ransom for their ten hostages. The company’s efforts to secure the release of the men was closely monitored and supported by the Turkish government.

The Turkish seamen after being freed in Nigeria

After their release on Friday, the men said they had been taken inland to a jungle, and while their captors were initially tough, they were treated well until their release. It is not clear if a ransom was paid and if so, how much.

Separately, four Turkish nationals who were kidnapped in Nigeria’s Kwara State on 19 July were rescued a week later on 26 July, according to Turkish state TV TRT.

The Gulf of Guinea, where the Paksoy-1 abduction took place, is described by the International Maritime Bureau as the most dangerous area in the world for piracy. It accounts for 73% of all sea kidnappings and 92% of hostage-takings.

Part of the sub-region of west Africa that intersects with the Atlantic Ocean, its basin countries include Benin, Togo, Nigeria, Cameroon, and Equatorial Guinea. The volatile delta region, while oil-rich, is plagued by poverty.