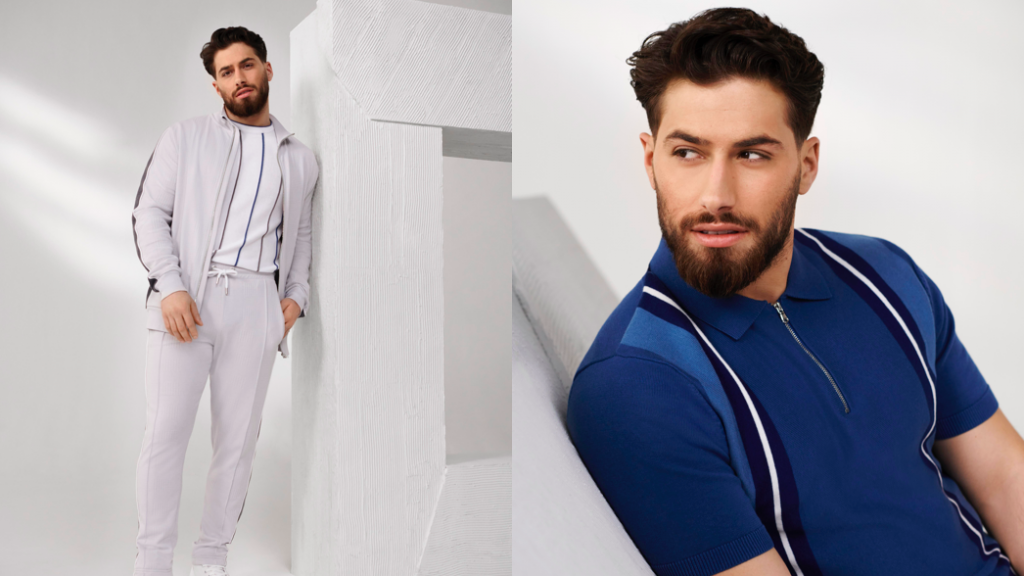 As Primark’s first-ever male ambassador, Kem returned for his third collection this summer, which is available in 100 stores globally.

Speaking of his collaboration with the high street fashion retailer Kem said, “I am so proud to be launching my third menswear collection with Primark. The last year has been challenging to bring these designs to life, but working with the team we have made the most of many remote video design meetings”.

His fashion lecturer mum Figen Cetinay was again by his side in creating this collection: “She knows my dress sense better than I do, and she’s really good at guiding me. I think that’s why we always have so much success, just by looking at the range you can see it’s true to me”.

There is a minimalist appeal and an understated colour palette washed with peach, navy and grey undertones which are lifted with bold monochrome graphics for a transpersonal appeal.

The collection is also a reflection of Kem’s current style, which has evolved over the years, making it different to previous collections.

Back in 2019, he described his style as ‘a little bit flamboyant, a little bit lairy’. The new summer 2021 collection echoes his own personal growth in a refined design aesthetic with reference to a maturity. It is underpinned by clever tailoring that elevates its otherwise casual appeal.

True to his own style, Kem doesn’t hesitate to push boundaries at Primark. He brought very short shorts to the store for the first time in 2019 and took joggers tighter around the ankle for a tailored fit last year. He believes it is was important to give the customers the opportunity to try different styles.

Kem defines his collection as ‘unisex’ and highlights that they listen to the feedback from customers to make sure they are bringing something fresh each year.

In its first year, the collection received Best Fashion Marketing Campaign (£100m+ turnover) Award in the prestigious Drapers Awards. It’s safe to say Kem’s third collection is also winning given the rate at which the items are flying off the shelves. Team Cetinay have told T-VINE they are already looking ahead to the next season.

Since winning Love Island on ITV in 2017, the 25-year-old Turkish Cypriot from Romford, Essex, has been an ever-present on our screens, appearing on everything from ITV’s Good Morning Britain and Dancing on Ice, to Celebrity Hunted for Channel 4’s annual Stand Up To Cancer campaign.

He is also a mental health advocate having experienced crippling anxiety and panic attacks as a teenager.

Kem is currently presenting the podcast Love Island: The Morning After, alongside DJ Arielle Free.

Later this month, the former barber turns his hand to a new venture, opening his long-awaited restaurant Array in Essex.

He is also preparing to compete in Celebrity MasterChef to show his Turkish Cypriot culinary talents.