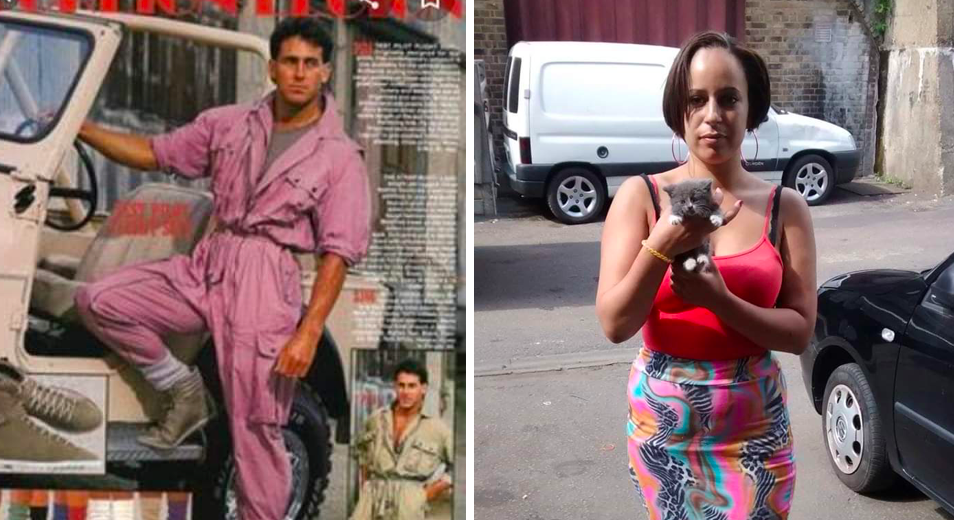 Not many words were shared, but the language of love took over all those years ago in a white house in Elephant and Castle, south London. The road name was Elliotts Row, house No. 32. It was 1986, spring time.

My mother Carole Mitchell had come over from Essex with her best friend Corrine. Money was tight, and with nowhere to live, the squatting scene seemed very appealing. This is where she met you.

You told her your name was Renard. I grew up hearing stories of what a handsome man you were, and about your love for animals, music and poetry, just like myself. It came naturally to me. It’s just who I am.

You arrived with your French friends Guido and Franc. You had dark, curly hair and big brown eyes, like me. You also had an acoustic guitar and played Billy Idol’s ‘White Wedding’ on it. I play this every day in the hope it draws you to me.

Our biggest clue is your pink jumpsuit. You were so brave to wear it. It makes me smile when I think of it. Some people have said they remember a man dressed this way back then. It was a very unusual way for someone to dress, a style reserved only for mega popstars and the like, so you would have stuck out. I collect memories like this from others, as I have none of my own. I love hearing anything about you.

My mum always thought you were French, but she said your accent was American. We did a DNA test on Ancestry and found out you were actually a Turkish Cypriot. I matched with a few distant relatives. Many of my DNA matches came from Baf / Paphos, Limassol, Yukarı Arhimandrita / Archimandrita (near Baf), Anoyira and Lurucina. I wrote to them. The grandfather of a fourth cousin from Lurucina was apparently a cousin to the infamous Hassan Bulliler outlaws. But no one I wrote to had a clue who you were. Some agreed to help me track you down, but so far I’ve got nothing.

I approached a genealogist called Monica who volunteered to help me create my family tree, but even she has found it difficult because many are not responding to our questions. I also uploaded my DNA to multiple sites such as TreeDNA, Gedmatch and LivingDNA. I’m thinking of trying 23andme, hoping it will reveal more matches.

One lady I spoke to said you most likely took part in an AFS charity programme in the 1970s in which students were sent to the US from Cyprus. That could explain your American accent. She said the programme was divided into two sections – arts and sciences. I suspect you did art and then came to London to enrol in an art college.

I went to the address where you met my mother. I knocked on doors and asked questions. No one knew anything. I was searching for a lead. Something, anything that would give me some kind of idea who you were. I was only able to locate one man, a Scotsman named Kevin O’Neill. Kevin had been arrested in 1986 for the murder of 19-year-old Mark ‘Spit’ Balcombe, another squatter in the area. I found out this murder is the reason you went missing. The police had raided all the local squats and started evicting the squatters one by one. Many ran away.

My mum wasn’t there at the time of the incident. She had gone away for the weekend. When she came back, she found the squat empty. You were gone, and she never saw or heard of you again. All she found was a bag belonging to you. It contained a photo of you on a boat with a man and a woman, who were believed to be your parents. Unfortunately, that was the only picture she had of you and I never got to see it as it was destroyed in a house fire.

I’m constantly wondering who you are, where you are, and what you look like. I’m consumed by these thoughts every minute of every waking hour. I feel so desperate to find you and just give you a big hug. I pray for you every day, that you’re safe, but it’s so hard not knowing. Sometimes it feels like my mind is going into overdrive. It’s killing me!

This is so important to me because I’ve always wanted to know what it’s like to have a family. My mother was adopted, so that’s a whole side wiped out, and not knowing you means another side is completely gone.

Growing up, my half-brothers had their dad and his side of the family, but I didn’t. I was always left out on birthdays and special occasions, always the outsider looking in. My stepdad didn’t stick around for me either. Neither did his family. I always knew he wasn’t my real dad, and it weighed heavily on my heart. He left my mum when I was 13 and never spoke to me again. I was cast aside and forgotten, like I was nothing.

I send out posts on Facebook and Twitter every day, pleading for any information someone might have. Maybe if word gets out, I’ll stand a chance of seeing you one day. You would be around 60 years old now. I hope I find you soon. So much time has been wasted already. I hope you get to walk me down the aisle on my wedding day, and you get to meet your grandkids Jada and Shylo.

I’m your daughter Natalie. You do not know about me, but I’ve been looking for you my whole life, and I’ll never stop looking. I love you dad, and I hope I get to meet you before it’s too late. Please make contact.

Love from your daughter,

Top image, (from left to right): model wears a pink jump suit, similar to the one Natalie’s dad used to wear; and Natalie Mitchell