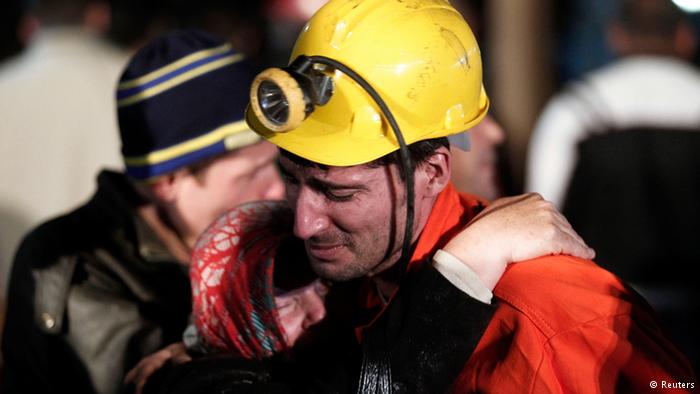 The Turkish government have declared three days of national mourning in response to the mining disaster that has claimed the lives of at least 232 coal miners. Some 800 miners were down in the pits in Soma, Manisa, in the west of Turkey, when an explosion occurred yesterday evening. The accident is one of the worst in Turkish mining history.

Turkish Energy Minister Taner Yıldız said a fire broke out following an explosion at a power distribution unit at the Soma mine on 13 May. Rescue teams worked through the night trying to reach the many men trapped underground. Most of the 232 victims were killed through carbon monoxide poisoning and a further 80 injured. Some 300 miners remain unaccounted for.

Following the tragic events, Yıldız announced this morning there will be three days of national mourning. Flags across Turkey are being flown at half-mast while many concerts and the planned weekend celebrations for the annual 19 May Youth and Sports Day have been cancelled. President Abdullah Gül and Prime Minister Recep Tayyip Erdoğan have postponed their official overseas visit to China and Albania respectively, so they can visit the Soma site instead.

In a press conference earlier today, the Prime Minister expressed his deepest condolences to the affected families and the nation at large, He praised the efforts of the rescue teams and said the government was doing all it could to assist and will continue to devote resources both to the rescue and to help those affected by the tragedy. He also pledged to investigate the causes of the accident.

While Turkey mourns and prayers are offered for the safe rescue of the remaining miners trapped underground, serious questions are also being asked of the Turkish government’s failure to act on previous warnings about the Soma mine.

In his opinion piece today, Hurriyet Daily News editor Murat Yetkin says the Turkish Energy visited the Soma mine nine months ago and praised ‘the quality of safety measures and levels of technology produced in Turkey’. Yetkin also recalls an interview given in 2012 by the Soma Mining owner Ali Gürkan who said the company had managed to drop the cost of coal from $130 to $24 per ton by manufacturing the electric transformers themselves instead of importing them. The company also hires subcontractors with lower salaries instead of workers who belong to the Maden-İş trade union.

However, Turkish opposition MPs in Manisa have long argued the focus on increasing profits at Soma has comprised the mine’s safety record. In a Parliamentary sitting on 29 April, a local opposition MP for the MHP, Erkan Akçay, told his colleagues:

Last year, another Manisa MP, CHP’s Özgür Özel submitted a motion to Parliament to investigate work-related accidents at coal mines in Soma. The proposal was debated a few weeks ago and while all the opposition parties backed the motion, it was rejected as MPs from the ruling Justice and Development Party (AKP) voted against it.

In the debate, Özel claimed Turkey topped the occupational accidents list among European countries and ranked third worldwide in terms of accidents.

Turkey has experienced several serious mining accidents before. Its worst was in 1992 when a gas explosion killed 263 miners near the Black Sea port of Zonguldak.

According to the International Business Times, Turkey is the world’s 13th largest coal producer and generates one quarter of its electricity through coal-fired plants, with much of the coal mined in the country used for domestic consumption. However, its safety record has been repeatedly questioned given its ongoing problems in multiple areas, including: a lack of air ventilation in mines, deficient early warning systems and a lack of mine auditing.

A report by the country’s Mine Workers Union claimed that between 2000 and 2008 there were 25,655 accidents in the state-owned Turkish Coal Corporation (TTK) mines, with 26,324 injured and 63 miners killed. According to the Chamber of Mining Engineers of Turkey, the fatalities grew significantly in one 12-month period, with 135 miners losing their lives in accidents between 2008 and 2009. The causality list for miners continues with a series of fatal accidents.

In December 2009, 19 miners were killed by a methane gas explosion in Bursa Province. In February 2010, 13 miners died in an explosion in Balikesir Province. A few months later in May, another mine disaster claimed the lives of 30 people in the Karadon coal mine owned by the TTK.

In November 2013, 300 miners barricaded themselves in a Zonguldak mine in protest at working conditions.