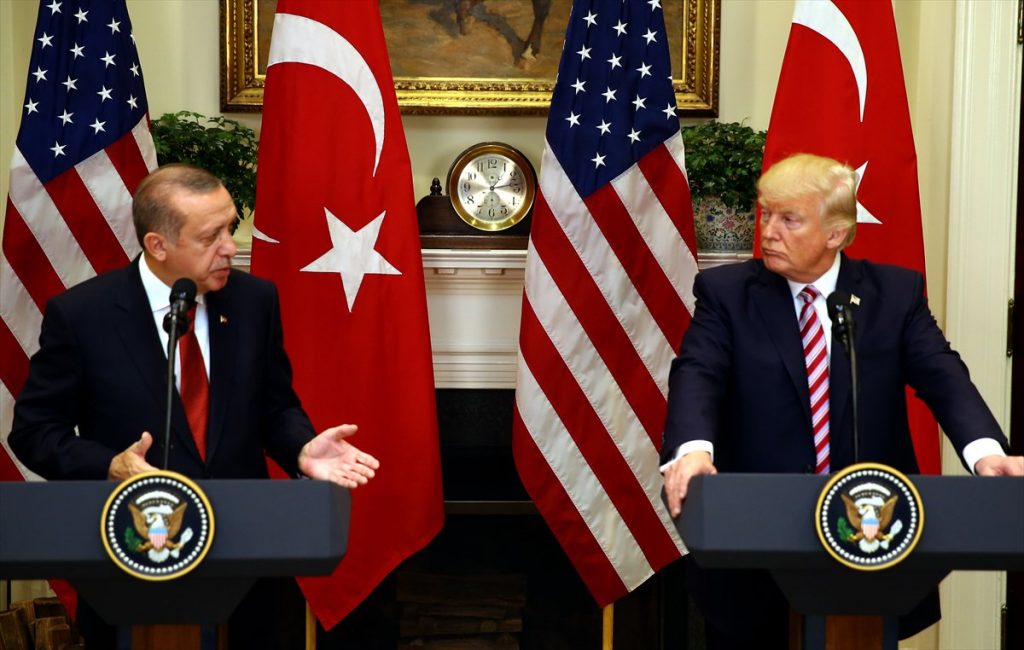 The Turkish President’s visit to Washington to meet with his American counterpart has seemingly failed to yield any results. After strained relations with Donald Trump’s predecessor, President Erdoğan was hopeful yesterday’s meeting at the White House would be a “turning point” in the relationship between the two NATO allies.

Erdoğan was buoyed by the fact Trump had called to congratulate him after winning last month’s referendum in Turkey – the only Western leader to do so.

The Turkish president was keen to secure Trump’s buy-in on three vital issues: the USA’s decision to arm the YPG, which Turkey regards as the Syrian extension of terror group PKK; the extradition of religious cleric Fetullah Gülen, who is charged by the Turkish authorities of leading last summer’s failed coup; and the release of Reza Zarrab, an Iranian-born Turkish businessman and gold trader arrested in the USA on suspicion of violating sanctions by illegally funnelling millions of dollars to Iran. Zarrab was also implicated in the corruption scandal that broke in Turkey in December 2013, which engulfed four AKP ministers and extended to Erdoğan’s family.

Many commentators were struck by the brevity of the meeting between the two leaders – said to have been just 23 minutes long. Given the thorny issues at hand and the need for translations between the two leaders, it is unlikely an in-depth conversation was possible on any single matter during the session, which was followed by a press conference of about the same duration.

Last week, the Pentagon announced the U.S. would begin directly arming the YPG, prompting alarm and condemnation from Turkey.

The US decision was addressed by President Erdoğan during a packed press conference at the White House: “We are committed to fighting all kinds of terrorism, without any discrimination whatsoever, that impose a clear and present threat upon our future.”

The Turkish leader added, “There is no place for terrorist organisations in the future of our region” and that treating YPG as partners is wrong: “no matter which country does it, certainly [this arrangement] does not fall in line with the global agreement that has been reached [on terrorism]”.

It was a great honor to welcome the President of Turkey, Recep Tayyip Erdoğan, to the @WhiteHouse today! pic.twitter.com/4BWjOCgnNv

President Trump side-stepped the criticism, instead offering his support for Ankara’s fight against Daesh and the PKK: he labelled both “terror groups” that  would “have no safe quarter.”

He also empathised with Turkey’s domestic battle against terrorism, stating: “The Turkish people have faced horrible terrorist attacks in recent years,” while voicing his appreciation for the country’s leadership “in seeking an end to the horrific killing in Syria”.

Keen to maintain a positive note the American president said: “The relationship that we have together will be unbeatable” and added they would work to “reinvigorate our trade and commercial ties.”

Yet for all the warm words, Turkey’s president will leave Washington empty-handed. Once seen as a role model for the region, the Turkish government’s behaviour home and abroad has alienated its most ardent supporters and forced the country to slip down the influence rankings at a critical time.

With his hands-on approach, President Erdoğan now dominates Turkish foreign policy. His strident attitude has increasingly left Turkey at odds not just with the USA, but also with virtually all of its regional neighbours and allies. The country has strained relations with Moscow, Cairo, Tel Aviv and Tehran, and it’s no better with Europe, whose leaders were accused of behaving like “Nazis” by Erdoğan after they banned his referendum rallies.

As commentator Semih Idiz writes in his recent article for Al Monitor, there is a “reverse correlation between Erdogan’s getting stronger at home and Turkey’s becoming weaker internationally”.

Turkey’s geo-strategic location used to be an important consideration for countries acting in the region, but not any more. As a result, Turkey’s legitimate interests, such as wanting to prevent heavy weapons reaching the YPG stationed less than 70 miles from its border at a time when the Kurdish faction’s sister organisation remains locked in armed warfare with the Turkish state, no longer curries favour with major powers and allies.

Russia, like the USA, is happy to work with the Kurds against Daesh in Syria and Iraq, a position made abundantly clear by Vladimir Putin the day before Erdoğan’s Washington summit with Trump:

“As the Kurdish factor is a real factor in the situation in Syria and Kurdish armed formations are taking part in combat operations against Isis and are among the most combat efficient units, we consider it right to maintain working contacts with them.”

It’s likely this same issue was discussed when President Trump met with Russia’s foreign minister Sergei Lavrov last week. The two super-powers share the same aim in wanting to defeat Daesh and end the bloodshed in Syria, deflecting Turkish concerns about arming “terrorists” on its doorstep.

Given the lack of Turkish success in Washington, it will be interesting to see where Erdoğan and Turkey-USA relations go from here.