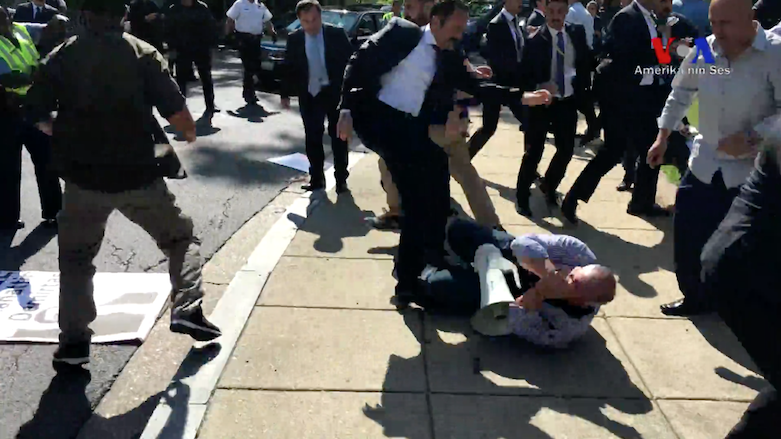 The Turkish president was hoping that his meeting with new American president Donald Trump would mark a “turning point” in relations between the two states. Instead, Recep Tayyip Erdoğan’s May 2017 trip to Washington will be remembered for his bodyguards taking part in a violent clash with protestors that left a dozen people bloody and bruised.

The ugly incident occurred after pro-Kurdish protestors, some waving PYD flags and anti- Erdoğan banners, assembled outside the Turkish ambassador’s residence. It is believed President Erdoğan had driven there after his meeting at the White House and was inside the building with Ambassador Serdar Kılıç and other notables when the assaults took place.

Police were on hand to protect the Turkish leader and to keep the two groups apart, but an altercation broke out as each side taunted the other. Eye witnesses said that Erdoğan’s supporters and his bodyguards then charged at the Kurdish protestors, with police struggling to prevent the ensuing chaos as the skirmishes spread out across the grass lawn in Sheridan Circle.

Video footage shows fists flying, and people being punched and kicked even when they were on the floor. Men in dark suits, thought to be part of President Erdoğan’s security detail, can also be seen taking part in the brawl.

It wasn’t until backup arrived that officers were able to restore order. By that point, people were wandering around dazed and injured, some seriously including two men pictured with bleeding head wounds. Nine people were taken to hospital, while two people were arrested, one for assaulting a police officer.

The US State Department condemned the attack and warned Turkey that the action would not be tolerated. “We are communicating our concern to the Turkish government in the strongest possible terms,” said Heather Nauert, a State Department spokeswoman.

A group of Republican politicians went a step further, calling the episode an “affront to the United States” and calling for Turkey to apologise.

In a TV interview, the veteran politician also called for the assailants to be identified and prosecuted. His appeal echoes those being made by victims of the brutal assaults, including a woman who was pictured being choked by a man alleged to be a member of President Erdoğan’s entourage. Ceren Borazan appealed directly to President Trump on Twitter for help in bringing her attacker to justice.

Dear @POTUS I’m being attackd in this photo. I was assaulted by this man, strangled for protesting. Please help me find & prosecute this man pic.twitter.com/8KNfGGWamI

A reputation for “thuggish behaviour”

Last year, President’ Erdoğan’s bodyguards were involved in another scuffle in Washington. As the Turkish president spoke inside the Brookings Institute, his entourage were busy roughing up protestors standing outside, as well as trying to remove journalists critical of the Turkish president from inside the building. The institute’s staff tried to escort the journalists back inside and, according to one eye-witness, its President Strobe Talbott had threatened to cancel the event if the bodyguards “did not desist with their thuggish behaviour”.

Another high profile assault was recorded in May 2014 involving Yusuf Yerkel, an aide to Turkish Prime Minister Recep Tayyip Erdoğan, who assaulted Erdal Kocabıyık, a miner, during a protest in Soma. Kocabıyık was part of a crowd of angry mourners who had mobbed the prime minister’s convoy as it drove through the town a day after a terrible mining disaster had claimed the lives of 301 people.

The prime minister had misjudged the mood and his insensitive speech caused outrage among the relatives of the deceased who jeered the Turkish leader. When Kocabıyık, whose relative was among the victims, swore at at Erdoğan and kicked his car, he was quickly arrested and beaten down by officers. Yerkel also joined in, landing a series of vicious kicks at the prostrate man, captured on camera for all the world to see.

Yerkel went unpunished for his actions and still works for the Turkish government, while Kocabıyık was fined 543 Turkish liras for damaging the prime minister’s car.