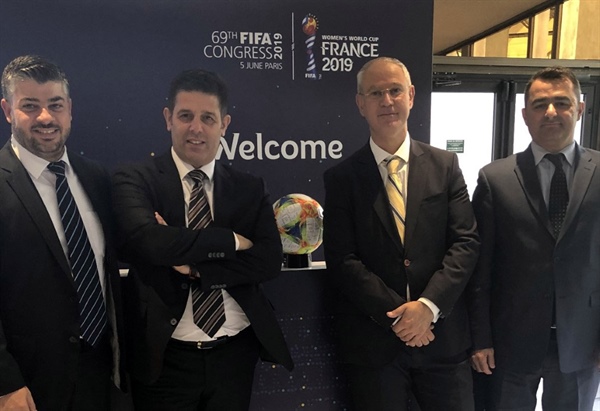 An MP from the Turkish Republic of Northern Cyprus (TRNC) was among a delegation that called for an end to the embargoes on Turkish Cypriot footballers at world governing body FIFA’s 69th Congress in Paris.

The group held contacts with “high level officials” from FIFA and “other football organisations” and made a presentation on the “political and legal” aspects of the lifting of restrictions on TRNC football clubs and players, a statement on the TRNC Parliament website said.

Speaking to T-VINE, Mr Kamalı said that the group had had meetings with “good people from FIFA” who understood the “demands of Turkish Cypriot football” on the island.

“We have hopes … for Turkish Cypriot football, for the future of our young people who have a passion for football,” he said.

FIFA only recognises the Greek Cypriot-run Cyprus FA (KOP) as the sport’s sole authority on the island, meaning that Turkish Cypriot players, clubs and the TRNC’s national team are not able to take part in competitions such as the World Cup and Champions League.

Teams from overseas, including those from Turkey, the only country that recognises the TRNC, are also barred from playing matches there.

Controversial efforts in 2015 by KTFF to be accepted into FIFA by becoming a member of KOP came to nothing after Greek Cypriot officials demanded to see “evidence” of the KTFF’s establishment in 1955 during British colonial rule.

The split occurred after Turkish Cypriots were expelled from the then jointly run KOP, set up in 1934, and Greek Cypriot sports clubs refused to allow Turkish Cypriot teams to play at their grounds.

The move came as terror group EOKA launched a campaign of violence seeking Enosis, the union of Cyprus with Greece.

In recent years the TRNC has looked to alternatives to FIFA as a way of breaking out of its soccer strait jacket.

In 2017 it hosted the CONIFA (Confederation of Independent Football Associations) European Football Cup, finishing runners-up in the tournament.

The North Cyprus national team attracted global media attention last year when it also reached the final of CONIFA’s World Football Club, spurred on by thousands of fans in Enfield, north London, in spite of efforts by Greek Cypriot lobby groups to have the games cancelled.

The team was absent, however, from this year’s CONIFA European championship, citing “security concerns” over Nagorno-Karabakh as the choice of venue.