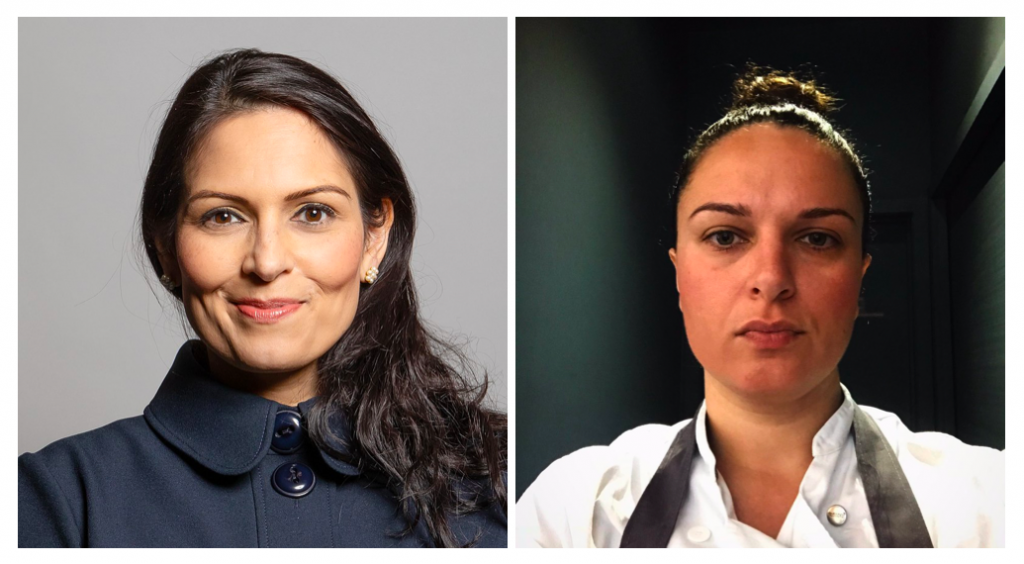 A leading chef from London is calling on people to support a campaign “to revoke [Home Secretary] Priti Patel’s categorisation of low and unskilled workers.

Selin Kiazim and her Oklava restaurant partner Laura Christie launched their online petition last week. Titled “Revoke Priti Patel’s categorisation of ‘unskilled’ hospitality workers”, it’s been signed by over 1,800 people and expresses serious concerns about the proposed new Home Office rules, which from 2020 will require all EU citizens to obtain work visas through a points-based immigration system. Non-British workers deemed “unskilled” will receive the lowest number of points and therefore have the least chance of obtaining a visa to work in the UK.

Kiaizim, of Turkish Cypriot origin, and Christie own acclaimed Shoreditch Turkish eaterie Oklava, which they opened in 2015. The workforce for the restaurant and its 2020 addition Oklava Bakery and Wine, in Fitzrovia, is a mixture of British and European staff. They are dismayed that under the new immigration system, highly experienced kitchen and bar staff would be categorised as “low-skilled”, making overseas workers ineligible for a UK visa.

The pair write on their petition, “This will unfairly burden an industry we love, a potential loss of not just workers but creativity, culture and diversity,” adding that they “fear this is the end of hospitality as we know it.”

Kiaizim and Christie’s concerns are echoed by industry leaders, who warn that the government’s Brexit-era points-based system would be extremely damaging to the hospitality sector.

Under the new rules, which will come into force next year, non-British workers would need to have a job offer and sponsorship from an employer to be eligible for a visa.

The points-based system means applicants need 70 points to qualify for a visa, with a variety of criteria candidates must satisfy to achieve that score. One aspect is how highly skilled they are, another is if there is a shortage of British staff in their field. They must also speak good English. The proposed scheme, announced by Home Secretary Priti Patel, would make it easier for restaurants to recruit chefs from anywhere around the world. However, they would currently need to earn a salary of at least £29,750 a year and have five or more years’ experience.

The lowest annual salary set by the Home Office for foreign workers is £25,600. An applicant on this lower salary would need to demonstrate a strong set of professional skills in their field to be awarded sufficient extra points to cross the 70-point threshold.

It is theoretically possible for those earning as little as £20,480 to also receive a work visa, but their employer would need to demonstrate they have struggled to hire locally due a shortage of British staff.

The new system categorises most of the hospitality workforce as ‘low-skilled’ or “unskilled”. The industry, which depends heavily on EU labour, say it is already facing staff shortages, yet the government has ruled out implementing special measures for the sector to hang on to existing European staff.

Leading trade body UKHospitality has warned that the proposals will lead to business closures.

Chief executive Kate Nicholls said: “Ruling out a temporary, low-skilled route for migration in just 10 months’ time will be disastrous for the hospitality sector and the British people. Business must be given time to adapt.

“These proposals will cut off future growth and expansion and deter investment in Britain’s high streets. It will lead to reduced levels of service for customers and business closures.

“Hospitality is already facing an acute labour shortage, despite investing significantly in skills, training and increasing apprenticeships for the domestic workforce.

“We are facing record low levels of unemployment, a dip in young people entering the labour market and have the highest vacancy levels of any sector.”

Full text of the petition

Dear @pritipatelmp – it’s Oklava again. It turns out there are quite a few of us proud ‘unskilled workers’ out there who disagree with this new adjective of yours. For the sake of our livelihoods, our migration status, and for the sake of the longevity of the industry we love – we think it’s time to reconsider. (SIGN THE PETITION ✊️ LINK IN BIO)

Like many we were utterly dismayed at the announcement this week of planned changes to visa requirements for EU citizens. This will unfairly burden an industry we love, a potential loss of not just workers but creativity, culture and diversity. We fear this is the end of hospitality as we know it.

We would like your support in response to the UK government’s new immigration laws, which under the points system would class restaurant and bar staff as “unskilled.”

According to hospitality software provider Fourth, if the Home Secretary Priti Patel’s new immigration laws come into effect, the restaurant sector will be the “hardest hit”, as employees are largely made up of what the government deem to be “low-skilled” or “unskilled” workers, making them ineligible for a UK visa.

The aim of this petition is to revoke Priti Patel’s categorisation of ‘unskilled’ workers and to oppose the changes to visa requirements for EU workers.

Hospitality workers and those in many other “low skill” industries are worth more than an arbitrary amount of points.