Ramazan is a time for spiritual reflection and reawakening

The holiest month of the Islamic calendar is upon us, with Muslims around the world fasting for a month as part of their personal reflection and devotion to God.

Fasting is one of the five pillars of Islam. For the next thirty days, all healthy Muslims will fast during daylight hours, refraining from eating or drinking anything from sunrise to sunset.

Ramadan, or Ramazan as it is known in Turkish, is when the Holy Kur’an was first revealed to the Prophet Muhammed.

Like the Prophet, each year Muslims also go through their own spiritual reawakening, using the month for quiet introspection and to rekindle their relationship with God.

During this month of abstinence, Muslims will need discipline and patience as they seek to break with break bad habits, and instead focus on how to improve their lives and become better human beings.

As part of their personal reflections, Muslims will read the Kur’an, pray more than usual, and perform acts of kindness. For those that can afford it, this will also include making charitable donations known as Zakat, another pillar of Islam.

Muslim almsgiving can be to help feed the poor and those living through conflict, as well as to support the upkeep and repairs of a mosque.

Mosques will be busy every day of the week instead of just Fridays, as Muslims attend each night after breaking fast to perform terâvih namazı, or Tarawih in Arabic.

This voluntary prayer, only performed during Ramazan, are accompanied by readings from the Kur’an, allowing worshipers the chance to expand and deepen their knowledge of Islam.

Terâvih namazı, which can also be performed at home, can occur any time at night after the obligatory Yatsı namazı (Isha prayer), but before Vitir namazı (Witr prayer) – the final prayer of the night. Terâvih namazı requires a minimum of eight, but is more usually 20 rekât.

A rekât is a unit of prayer in Islam, which comprises of standing and reciting an extract from the Kur’an, bowing, standing again, then prostrating. The Terâvih namazı is prayed in sets of two rekât. People can take a break after each set of four rekât.

See below for fasting and prayer times from Aziziye Mosque in Stoke Newington, London. 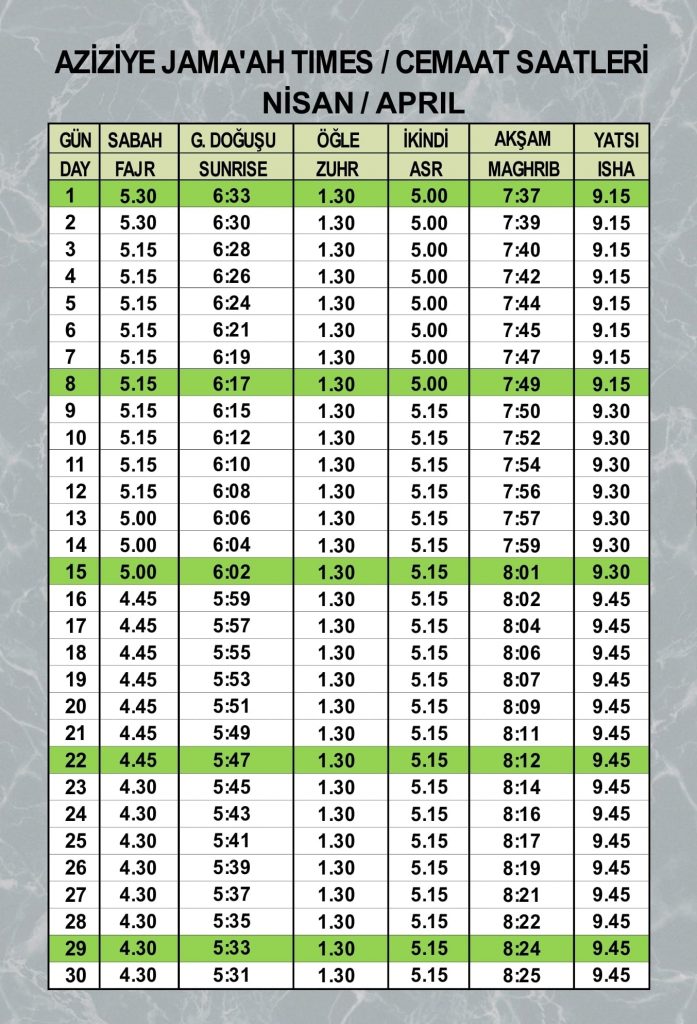