domestic violenceInternational Day to End Violence against Women and Girlswomen 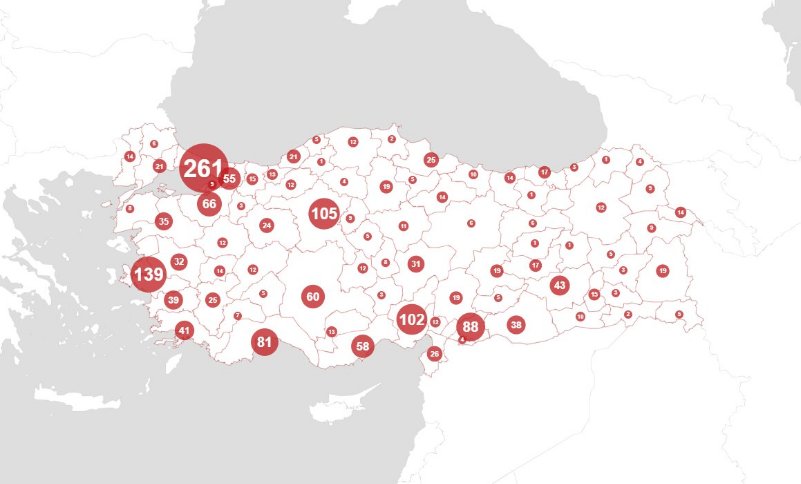 Yesterday, Saturday 25 November, was International Day to End Violence against Women and Girls. It brought tens of thousands of women around the world on to the streets to protest at the on-going gender-based violence that results in the sexual or physical assault and murder of women each year.

Kadın Cinayetleri, a women’s group in Turkey, tweeted a snapshot of the marches that took place in France, Norway, Spain and Turkey, as globally women came together in a show of strength and solidarity.

One of the worst statistics to emerge is from Turkey, where 1,915 women have been murdered since 2010. 240 women were killed in the first ten months of 2017 alone.

A website called kadincinayetleri.org (‘Murders of Women’) has captured each incident on a map. It details where in the country the murders took place, as well as recording the name and age of each victim, the date of their murder, the person responsible or suspected of murdering them and, if known, the reason for it.

The ages of murdered females ranged from infants – 56 were killed aged 0 to 12 years – through to the elderly, with 47 women aged 71 and over murdered. Forty percent of all those killed in the past eight years – a total of 751 women – were aged between 26 and 40 years old.

Half of all Turkish women killed since 2010 were murdered by their partners (husband or boyfriend). This rises to 62% when it includes former partners too. The most common reasons for the murders include jealousy or insecurity (a suspicion they are being cheated on) by a partner, being asked for a divorce, or being spurned after trying to reconcile following a separation.

The worst place for violence against women is Istanbul – Turkey’s most populous city – where 261 women were murdered in the past eight years, 31 of these in the ten months of 2017. Izmir and Ankara were the next worst places for femicides. The least number of gender-inspired murders in the country was in the Black Sea Region, and Tunceli and Bingöl to the East.

On average, 2 women a week in Britain are killed by their partners

While there are statistically fewer femicides in Britain than Turkey, the numbers remain incredibly high. One in four women in the UK are said to have been subjected to sexual or physical violence, according to the latest United Nations statistics, while a woman is assaulted an average of 35 times before she reports it.

In December 2016, UK Government figures showed that 900 hundred women had been killed in the past six years. Similar to Turkey, 64% of these were committed by present or former partners. Campaigners believe that on average two women a week in Britain are killed by their partners.

A British blogger, Karen Ingala Smith, who heads a women’s charity, records the murders of women who are victims of domestic violence in a section called Counting Dead Women. She stated online that 105 women were killed in the first nine months of 2017. On the morning of International Day to End Violence against Women and Girls, she tweeted the names and pictures of every victim so far this year.

Women’s groups in Britain and Turkey expressed their frustrations at their respective governments for failing to tackle the problems and root causes of the issue.

The UN has launched a 16-day international campaign to raise awareness of the scale of the problem, and the need to give victims better support and access to justice.