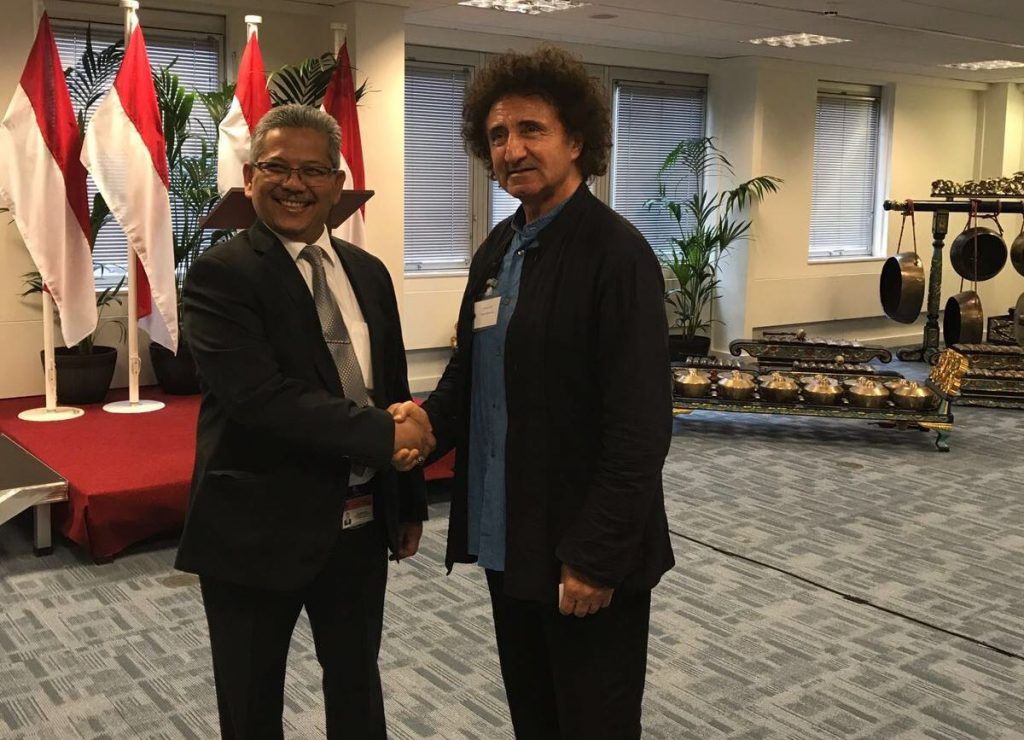 The man credited for establishing Turkish cuisine in Britain has pledged to do the same for Indonesian food. Hüseyin Özer offered his help to the Indonesian Ambassador Dr Rizal Sukma and Commercial Attaché Mr Nur Rakhman Setyoko during a reception at the Indonesian Embassy last week.

Mr Özer helped popularise Turkish cuisine with his chain of restaurants in Central London, opening his first Sofra restaurant in Mayfair forty one years ago. During the 1980s and 90s he changed perceptions, showing food critics and diners there was more to the Turkish kitchen than kebabs.

Sofra became a training ground, launching the careers of many upcoming restaurateurs from Turkey including Önder Şahan (Tas chain, Hazev) and İbrahim Doğuş (Troia, Westminster Kitchen). Today, Mr Özer’s restaurant chain has been given an official ‘work-based learning centre’ status by Middlesex University, with budding chefs, catering lecturers and entrepreneurs all coming to learn their trade.

Talking to the Ambassador Sukma, Mr Özer explained that, “Food is the natural gateway to discovering a new country, its people and culture. If people visit a restaurant and love the food and hospitality, they will be curious to learn more. I am happy to help Indonesian restaurant entrepreneurs to succeed in Britain, showing them where to open a restaurant, and helping them to set the right menu, margins and service levels.”

Afterwards Mr Özer told T-VINE, “The restaurant business can open many more doors to other business sectors. When I first opened Sofra, there was no Turkish food wholesale or distributor, and tourism to Turkey was negligible. As by business expanded, so did many others including TFC (Turkish Food Centre) and Tees (UK Turkish alcohol distributor), and lots more Britons started to go to Turkey for holidays, and do business there.”

While Southeast Asian food, notably Indian and Thai, are among Britain’s favourite cuisines, Indonesian food has yet to reach the mainstream. Zeren Wilson, T-VINE writer and a leading London food and wine critic, said there was currently “nothing of note” in the capital, but “loads of scope to exploit”.

Pointing to the expected explosion of interest in Malaysian cuisine, Zeren believes, “with the right momentum, Indonesian food could be next. There is massive potential with [national dishes] nasi goring (fried rice) and gado gado (mega Indonesian salad)”.

With a population of 260 million, Indonesia is the world’s fourth most populous country, but its community in Britain is relatively small, numbering no more than 20,000. With Brexit looming, the Indonesians are eyeing new opportunities to expand trade.

The reception was a precursor to the Indonesian Weekender, a two-day cultural outdoor event held at Potters Fields Park by Tower Bridge, which featured Indonesian street food, fashion, art and dance.