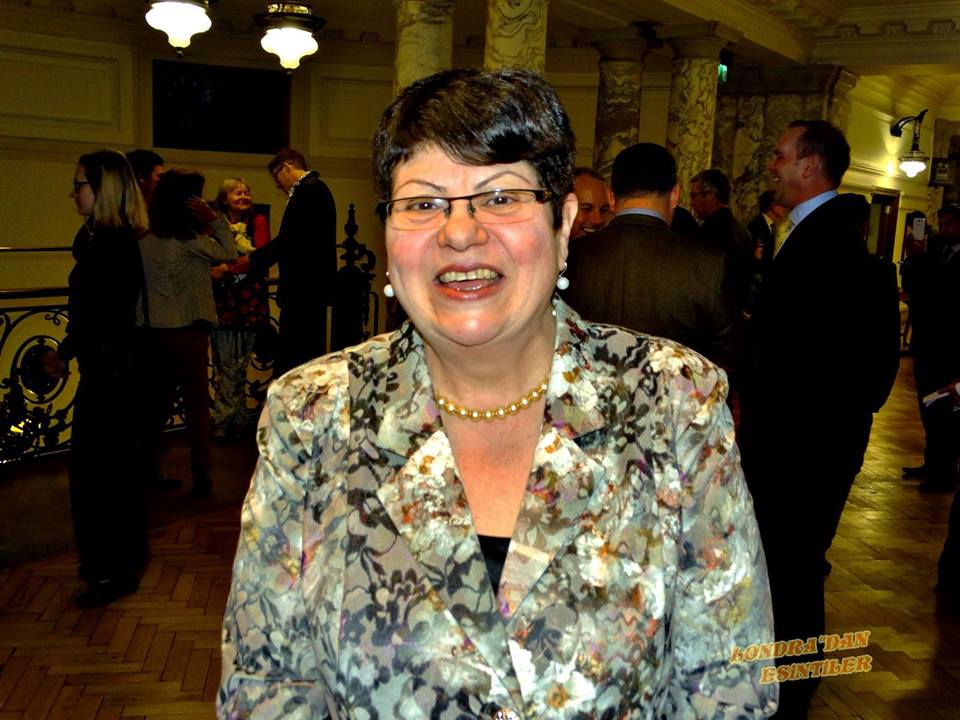 The British Turkish community is in mourning today following the sad news that one of its most popular personalities has died. Nilgün Canver passed away at University College Hospital in London late last night following a short battle with cancer.

One of the first British Turks to take up a political post, Canver paved the way for dozens more to follow. She was a long-standing member of the Labour Party, serving as a councillor in the North London Borough of Haringey for over a decade. A founder member of the Labour Friends of Turkey, she also had the ear of the party’s leaders: former British Prime Ministers Tony Blair and Gordon Brown, and Ed Milliband.

Originally from Adana in Turkey, Canver came to Britain as a student in the 1970s, which she made her permanent home. She quickly became politically active, first among the local Turkish community and later by joining the Labour Party. In May 1998, she entered the local elections, winning a seat as a councillor for St Ann’s ward, which she represented for 16 consecutive years, before standing down in May 2014.

During her time as a councillor, Canver was appointed a Cabinet Member for Haringey Borough, responsible first for the Environment and later Community Safety. She also played a pivotal role in the Strategy Group for Green Lanes, overseeing this historic street’s revival, which is now bustling with shops, bars and restaurants.

An ardent supporter of the European Union, Canver was the first Turkish origin politician in Britain to be put forward as a political candidate for the European elections, standing for Labour in London in 2008. However, she was placed low on the party’s list giving her little chance of electoral success.

Between 2010 and 2013, she served as the Vice-Chair on the Transport and Environment Committee on the city-wide London Councils body. During the same period, she was also a Local Government Association Licensing Champion, working with ministers and local authorities to determine the LGA’s response to a variety of licensing issues.

In 2010, Prime Minister Gordon Brown appointed Canver as the Labour delegate to the EU Committee of Regions, and also to the EU Council of Europe Congress. Throughout her professional life, she was committed to Britain and Turkey being part of the European vision.

Canver was a co-founder of the Labour Friends of Turkey, helping to build bridges between her native and adopted home countries

She also remained close to her Turkish roots and in 2007 was one of the co-founders of the Labour Friends of Turkey, which aimed to build bridges between her native and adopted home countries.  As chair of the group, she oversaw an important platform for Turkish politicians to regularly address their UK counter-parts, while deepening relations with Labour’s Turkey equivalent CHP (Cumhuriyet Halk Partisi / Republican People’s Party).

In 2011, following Canver’s invitation, CHP leader Kemal Kılıçdaroğlu visited London where he told members of the British Parliament that the Turkish government was moving towards an autocracy. During his talk, which was attended by the likes of Ed Milliband, then leader of the Labour Party, Kılıçdaroğlu prophetically stated that critical voices in Turkey were being systematically jailed and that the situation was likely to get worse.

A single mother of one, Canver worked tirelessly to improve the wellbeing of the British Turkish community. Among the many groups and causes she actively supported were the UK Women’s Association for Turkish speakers and the Turkish Education Group.

Sadly, Canver’s promising political career was derailed when she was found guilty of perverting the course of justice in January 2014. In August 2013, her 23-year-old son Burak had taken her BMW car without her permission and had a crash on Tottenham’s Seven Sisters Road. Although no one else was involved, Burak was uninsured at the time.

When Canver attended the scene of the accident, in a moment of madness and out of motherly instinct she originally told police that it was her behind the wheel to deflect attention from her joy-riding son. She corrected her story within minutes, but was still charged and was subsequently found guilty by jurors in a 10-2 majority decision at Highbury Corner Magistrates Court.

Her “exemplary character”, which included a glowing reference from local MP David Lammy, meant Canver was sentenced to a 12-month conditional discharge. She later told the editor of T-VINE İpek Özerim she “deeply regretted” the events of that night. After an extended break from public life, she managed to pick herself up, continuing to work for her party and her community in the background, while focussing on her new vocation as a business consultant.

Canver was diagnosed with an aggressive form of blood cancer in 2016. She was admitted into hospital last Tuesday, but her condition rapidly deteriorated. She died late on Sunday night surrounded by family and close friends.

David Lammy MP: “Green Lanes won’t be the same without you”

News of her death spread quickly via social media, with many expressing shock and deep sorrow about the loss of this inspirational woman and public servant. Among them was Cllr Emine Ibrahim, who wrote on Facebook that she was “devastated” to learn of her passing, calling Canver “a true servant of the Labour Party serving as a Cllr and Cabinet member in Haringey for so many years, but also a great champion [of] European cooperation”.

In her touching tribute, Ms Ibrahim also said, “most of all you were a true community politician a legend of Green Lanes who championed the communities who live and work here. I will miss our hours of coffee and catch ups and most of all your company and guidance and spirit. I will never forget that you took me under your wing showed me true friendship and made sure I knew everything I needed to know about ensuring that we maintained the continuation of solid community cohesion in an area that is so iconic to the UK diversity ideal despite difficult times.”

Tottenham MP David Lammy said, “A kind and generous soul gone too soon”, adding “Green Lanes won’t be the same without you.”

Radio presenter and world music guru and former Haringey resident, DJ Ritu described Canver as, “A champion of ‘other’ minorities that often get overlooked, with feminist values, an amazing sense of humour and fun.” The two women had met in the 1980s when Ritu DJ’ed at various women’s events organised by Turkish women’s charity IMECE.

T-VINE extends its heartfelt condolences to Nilgün Canver’s family, friends and the wider community. A pioneer in every sense of the word, she will be sorely missed.