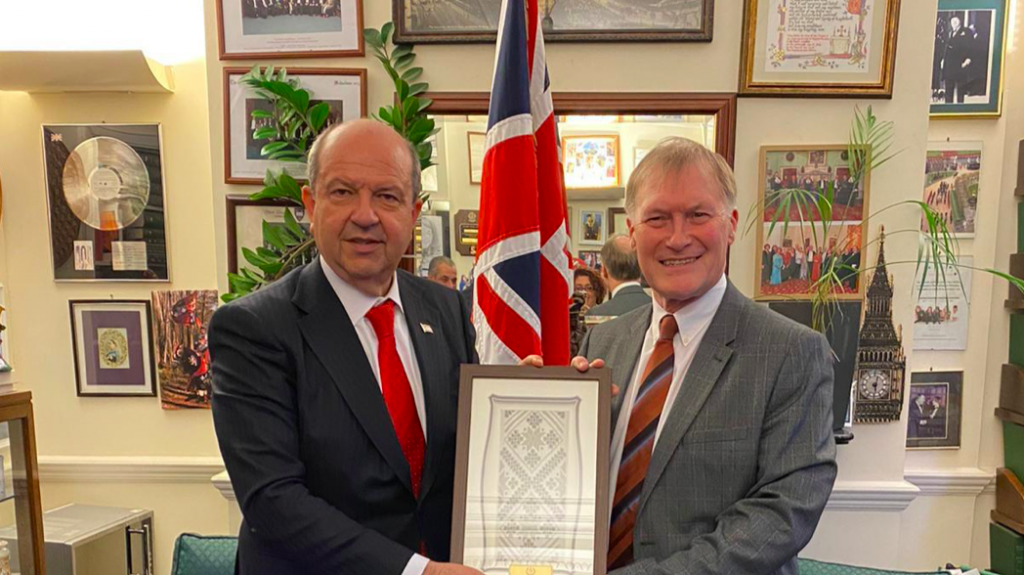 The senseless and shocking murder of British Parliamentarian Sir David Amess has devastated not only his family, friends and colleagues, but also the very many communities his life and work touched.

The 69-year-old Conservative Member of Parliament for Southend West was stabbed to death during a constituency surgery at Belfairs Methodist Church in Leigh-on-Sea, Essex, on Friday, October 15.

Ersin Tatar, the President of the Turkish Republic of North Cyprus, who met Sir David in Parliament last year, led the tributes for Turkish Cypriots:

“I’m shocked to hear the tragic death of Sir David Amess MP. He was a true friend of Northern Cyprus and will be remembered for his principled stand for fairness and justice towards Turkish Cypriots. My sympathies to his loved ones. May he rest in peace.”

In the UK, the Council of Turkish Cypriot Associations (CTCA) also mourned the loss of the much loved politician. President Ayşe Osman posted this message on CTCA’s Facebook group:

“We at CTCA are shocked and deeply saddened by the news that Sir David Amess was fatally stabbed at his Constituency surgery this afternoon.

“Sir David was a good man and great friend of the Turkish Cypriot community. He was always ready to extend a helping hand and support us in a variety of ways, from attending CTCA’s first ever awards night, to hosting us in Parliament, and most recently appearing on the BTCA Cyprus seminar series.

“He was always warm and kind, and will be truly missed. Our deepest condolences to his family, friends and colleagues. Rest in peace Sir David Amess MP.”

The CTCA and its member groups had a long history of working with Sir David that stretched back to the 1990s. He had initially alienated himself by expressing strong pro-Greek Cypriot views on Cyprus.

When challenged by his Turkish Cypriot constituents in Southend, Sir David showed an openness to listen and learn about the experiences and injustices faced by Turkish Cypriots.

He visited both parts of the island, gaining first hand insights about the history of the conflict and the impact it had on both communities, resulting in him adopting a far more balanced position on the island’s political problems.

On learning of his tragic and untimely death, Mr Müftüzade told T-VINE: “I had the privilege to meet him while I served in London and we became friends. He was a true ally of the Turkish Cypriot people. He defended the human rights of Turkish Cypriots and their just cause. A man of the people whose humanitarian approach deserves the highest praise. May he rest in peace.”

Leyla Kemal: “David was brilliant in every way. I can’t believe he has gone”

The East London-born MP attended multiple Turkish community events, even those outside of his Essex constituency, demonstrating his great affection for the community. He would be present for special days at Eltham Turkish School and lend a hand with charity fundraisers for Thalassemia – a blood disorder that commonly affects Cypriots.

In May 1999, he hosted a Thalassemia awareness event at the UK Parliament, attended by TRNC Health Minister Dr Gülsen Bozkurt – believed to be the first time a serving Turkish Cypriot minister had attended a function at the British Parliament.

Sir David hosted the the CTCA’s annual reception on the Terrace Pavilion in the House of Commons in October 2014, where he and fellow Conservative MPs Andrew Rosindell and David Burrowes spoke. The evening helped to foster better political ties with the community.

The Southend West MP was the guest-of-honour at CTCA’s inaugural awards night in October 2017, to celebrate the community’s high achievers and volunteers. His warmth and good humour touched all who attended that night, as he readily posed for photos with guests and award winners, including BBC Dragon Touker Suleyman, chef Selin Kiazim and television personality Kem Cetinay.

His kind nature was perhaps best embodied when 91-year-old Akile Işın was announced as the recipient of the CTCA Female Lifetime Achievement Award. Without hesitation Sir David rose to his feet to greet the frail old lady, extending his hand both as a means of support and also to shake her hand in acknowledgment of her outstanding service to her community.

One of those in the British Turkish community who worked closest with Sir David is former CTCA President Leyla Kemal. She had met the MP through her older brother Mehmetali Salih, a Southend resident who was key in influencing the politician to adopt a more even-handed approach on Cyprus.

Mrs Kemal told T-VINE that as head of Eltham Turkish School and later CTCA President, she had been delighted to present Sir David as a keynote speaker and guest at multiple community events. Through her brother, they struck up a good friendship that led to many shared activities and socialising.

“I have known David for over 25 years. He was always open to helping us, attending community events and hosting us in Parliament.

“When we held a big fundraising dinner for Thalassemia [in 1999], he helped me to organise the auction, and he was the MC for it at the dinner. He had a real flair for it and we raised thousands of pounds.

“He came to Cyprus and despite all the obstacles Greek Cypriots put in David’s way not to cross over [the Green Line border], he still did. He wanted to visit the Thalassemia Centre in Lefkoşa we had been fundraising for.

“My family and I treated David like family. We went out for dinners. We took him to meet the TRNC President Rauf Denktaş. He was open to everything. That visit was an important opportunity for David to learn more fully about the history of Cyprus and what we Turkish Cypriots had lived through, and why we had formed the TRNC.

“David was brilliant in every way. I can’t believe he has gone. He didn’t deserve to go like that. He was an exceptional person. Full of joy, always kind. Always smiling. I will miss his friendship.

“My deepest condolences to his family and friends. May he rest in eternal peace.”

The bonds forged by Leyla Kemal and her brother Mehmetali Salih with Sir David created a strong and ongoing connection between the MP and the British Turkish Cypriot community.

Earlier this year, the veteran politician took part in a panel discussion about Cyprus, reflecting on the rights and needs of both communities, while also taking aim at the European Union for admitting a divided island that excluded Turkish Cypriots.

The British Turkish Cypriot Association wrote, “We are so saddened to hear of the death of Sir David Amess MP who was kind enough to take part in our series of webinars this year on the ‘Future of Cyprus’. Our thoughts are with his family at this devastating time. May he Rest in Peace”

Both the TRNC London Office and Turkish Embassy in London also issued statements about Sir David’s untimely and shocking death: “We are profoundly saddened by the tragic death of Sir David Amess MP,  today in his Constituency. Sir David Amess MP was an honourable and valued friend of the Turkish Cypriot community in the UK

“We convey our sympathies and heartfelt condolences to the bereaved family of Sir David Amess MP, to his constituencies and his beloved ones,” was the statement from the TRNC London Office.

The Turkish Embassy wrote: “We are utterly shocked and appalled by the death of Sir David Amess MP. Our deepest condolences to his family, friends and colleagues, and to the British people.”

Many British Turks from across the political divide also expressed their shock and sadness of the MP’s untimely passing.

Posting two pictures of Sir David signing a book at the recent Tory Party Conference, Conservative Councillor Kay Isa wrote: “So sadenned [sic] to hear Sir David Amess MP has died in such a cruel way. Such a kind caring person, can’t believe this was 10 days ago at the Party Conference him signing his book for me. I will treasure this memories of him.😥”

Ibby Mehmet, a former Labour Party parliamentary candidate for Old Bexley and Sidcup, posted a picture of himself and Sir David at the Goodwood Festival earlier this year, which combines horseracing with entertainment. Both men are in black tie and smiling.

Mr Mehmet captioned the photo: “My dear friend Sir David. Rest in Peace. Thank you for the memories and your friendship”.

“He was a true friend and ally of the Turkish Cypriot community. Sir David offered his support again earlier this year by appearing in our BTCA webinar. He was warm and charming with a fantastic sense of humour.

“We are mourning the loss of an irreplaceable friend. My thoughts are with his family, who are left to reconcile with this terrible loss,” she said, before adding a prayer in Turkish for the MP and his family, “Merhuma Allah’tan rahmet. Sizlere sabır dilerim, başınız sağolsun [May God have mercy on the deceased. I wish you patience, my deepest condolences].”

The death of Sir David follows that of his Conservative colleague James Brokenshire, the MP for Old Bexley and Sidcup, who died seven days earlier from lung cancer. Both men had been good friends of the British Turkish community.