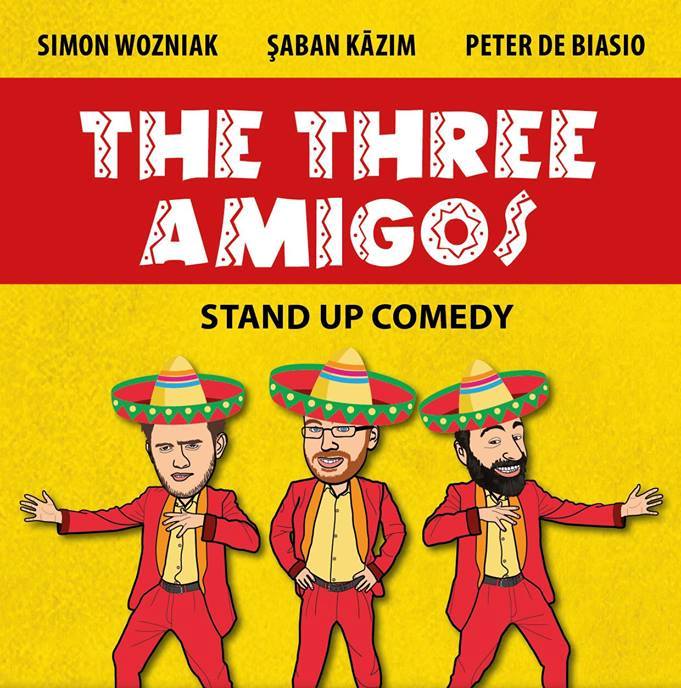 Their show may be called Three Amigos, but Şaban Kâzım, Peter de Basio and Simon Wozniak don’t actually all know each other, and there’s nothing Mexican about them or their act. Yet fate has decided to bring these three upcoming stand-up comedians together in a one-hour show at the Bourbon Bar at this year’s Edinburgh Festival Fringe.

We caught up with former King Gong winner Şaban before he made his way up to Edinburgh to ask about the new show.

When are you on?

We will be performing at the Bourbon Bar every night from 14th – 28th August, from 8:30pm to 9:30pm. The only night I won’t be there is on the 16th, because I will be doing a spot in Glasgow that day, but the other two will be there with a Şaban lookalike covering for me – or just another comedian that doesn’t look like me.

Is this your first time to Edinburgh?

No. I did a show in Edinburgh in 2011 for a week in a café. The venue owner turned out to be Turkish, so I got discounted hellim everyday. It was a difficult show, so it kind of put me off Edinburgh, but since then I usually go up each year and do open spots at other people’s shows.

Last year I went up because I was selected to be in a BBC Comedy competition, which was broadcasted on the radio – so far the highlight of my career. Peter has been up once before – last year – so we met up and gigged together during the Festival.

What’s the theme behind ‘three amigos’?

There is no theme. Every night, each of is will be doing our own thing for 20 minutes. It’s a good way for us to get more practice and experience, as none of us are ready to do a solo show yet.

How did the “Three Amigos” come about then?

I keep bumping into Peter de Basio on the [comedy] circuit and we get on really well. He has a similar background [to me], so we could both relate to each other. It was Peter’s idea to put a show on together. He suggested we get a third guy and we each take it in turns opening the show, going in the middle and headlining.

Originally we had another guy, but he couldn’t make it, so Peter suggested Simon [Wozniak]. He’s in Liverpool so we’ve yet to meet. Peter lives in Leeds. So hopefully we will all get on and by the end of the run be proper amigos.