The mysteries of Göbekli Tepe, an on-set death and Netflix: a review of Atiye / The Gift 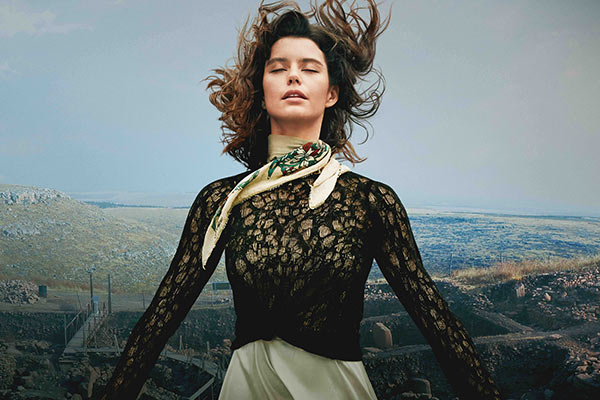 Based on the mystery about the world’s oldest temple Göbekli Tepe, acclaimed TV drama Atiye (The Gift) was the most popular series of the year 2019 on Netflix Turkey, despite only being released on 27 December*.

The second Netflix original Turkish series, Atiye was given the thumbs up by non-Turkish audiences and was recommended by BBC Culture in December as one of the ten best television shows to watch.

The show is about Atiye, a young and beautiful artist, who lives in Istanbul, has a rich and handsome boyfriend and a lovely family. She opens her first solo exhibition, but her perfect life starts to change with a discovery made in Göbekli Tepe, an archaeological site in the southeast of Turkey dating back to thousands of years.

An archaeologist called Erhan discovers a symbol in one excavation that indicates a mysterious connection between Atiye and Göbekli Tepe. It prompts Atiye to travel to the site to try and discover the secrets of her past hidden within those ancient ruins.

Twelve kilometres (7 miles) northeast of the city of Şanlıurfa, Göbekli Tepe is one of the most breath-taking discoveries of the ancient world. The religious temple is 12,000 years old – centuries before any known settled life, challenging previously held views about the rise of civilisation.

Until this discovery, historians had suggested that early civilisation had started with farming, then religion came into their lives and they built temples. Conversely, people now think the need to worship may have triggered civilisation.

The series is fascinating, putting the spotlight on Göbekli Tepe, as well as the folkloric history of Mesopotamia, such as the mythical creature Shahmaran, and combining these with Quranic verses. A visual feast, the filming features the historic sights of Turkey, including another ancient wonder Mount Nemrut. I can imagine many non-Turks viewers getting the urge to visit Turkey after watching this incredible drama.

Yet the series should serve more than a touristic attraction. Watching the series, I actually started to think Netflix is a bit Orientalist (presenting Turkish culture as somewhat exotic, yet also a bit backward, and at times dangerous) when it comes to its Turkish and other Eastern shows.

Netflix’s first Turkish original TV series, The Protector (Hakan: Muhafız) was a supernatural story. While Turks weren’t up in arms over the series, I noticed that Arabs did get vocal over a similar Netflix show called ‘Jinn’, as they were unhappy with a drama that drew on cliched storylines and characters. I can relate. Why can’t we simply have a Turkey equivalent of something like Dogs of Berlin or House of Cards?

Also, I must say I am not very impressed with how the plot progressed towards the end of the first season of Atiye. It seemed too similar to another Netflix original, German-made Dark, which is my favourite TV series of all times. It is a shame they followed in the footsteps of their Western counterparts, when the producuers could have created a far more original story, especially given the rich history of Mesopotamia. I hope Atiye’s second season will be different, yet I fear the storyline is already too far removed from the one they could have developed.

Some of the character developments and acting was also weak. We didn’t quite understand everyone’s personal story. Although I am a fan of hers since Aşk-ı Memnu, I found Beren Saat, who plays Atiye, very dull. The lead male actor, Mehmet Günsür, didn’t really do a great job either. Someone on Twitter wrote that ‘Mehmet Günsür only plays Mehmet Günsür’. It is so funny, but when I think about it, I couldn’t agree more. We should, however, give credit to Meral Çetinkaya, who is a phenomenal actress with a glistening career spanning almost 60 years. She easily gave the best performance of the series.

Sadly, the most depressing thing about the drama is not the season finale or the acting, but that one of the production crew members died on site during filming in April 2019 and the way that death was handled.

Hasan Karatay suffered a fatal work accident after falling from a ladder while working on the film set’s props and décor. The Actors’ Union (Oyuncular Sendikası) said the death amounted to negligence by producers, as Karatay was not insured and was without safety equipment, including a harness and helmet, which could have saved him.

After the accident many actors, including Beren Saat and Mehmet Günsür, posted their condolences on social media. OG Medya, the makers of Atiye, also issued a condolence message, while bizarrely including a comment that there had been misinformation about Karatay’s death and that they would make a further statement after the legal investigation was completed.

It has been a year and they still the producers have not done anything to rectify the situation. They have however, held a big gala, and ran huge advertisement and publicity campaigns to promote the new series, all as if this tragic accident never happened. It’s as if by writing ‘In loving memory of Hasan Karatay’ at the end of each episode they unburden themselves.

Many newspapers promoted the show positively before and after its release despite the accident. I’m sure if such an accident happened in a more developed country, it wouldn’t be like that. Which begs the question, ‘how is Netflix is OK with all of this?’, also asked by the Actors’ Union.

Speaking of Netflix, we should also have a look at how they are changing our television consumption practices and what this could mean for Turks. With more and more people preferring to watch series on digital platforms, Netflix not only releases, but also produces TV shows from around the world. They also make it easy for diverse audiences to watch by offering subtitles and dubbed versions in multiple languages. Subscribers can enjoy a great variety of Turkish movies and television series, all available with at least English subtitles.

Earlier this year, Netflix released another Turkish original blockbuster: Rise of Empires: Ottoman.  The first season of this 6-episode dramatized documentary is based on the life of Fatih Sultan Mehmet, who is played by Cem Yiğit Üzümoğlu.

Turkey is a very important market for Netflix with 1.5 million individual subscribers. It means they could have an audience of some 4 million when considering families share the same account to watch their favourite online shows. Also, Turks are number one in the world when it comes to watching Netflix while on public transport, according to the platform’s Middle East, Turkey & Africa Communications Manager Artanç Savaş.

Netflix and other digital platforms also have enjoyed certain benefits that Turkish TV channels don’t. Each episode of a television series that is free-to-air can run for two hours because of the multiple very lengthy commercial breaks, which are highly annoying. Television content is also strictly monitored by RTÜK (Radio and Television Supreme Council – Turkey’s broadcasting authority), which regularly issues fines for scenes deemed ‘immoral’. Last year, it also started to monitor digital platforms promoting a big backlash from the public.

Netflix has since introduced a parent pin to control access to content intended for audiences over 18 years old in Turkey. Yet even with RTÜK’s closer involvement, the platform still enjoys a great freedom, Mr Savaş said. He claims Turks watch the same content as 190 other countries. This may be true for non-Turkish production, and yes we do see a greater amount of uncensored alcohol glasses in Turkish shows than we would on terrestrial TV, but Turks still have to make out with their clothes or underwear on, even on Netflix.