The ‘Turks on Tour’ banner, an epic North London Derby, and why this season belongs to Spurs 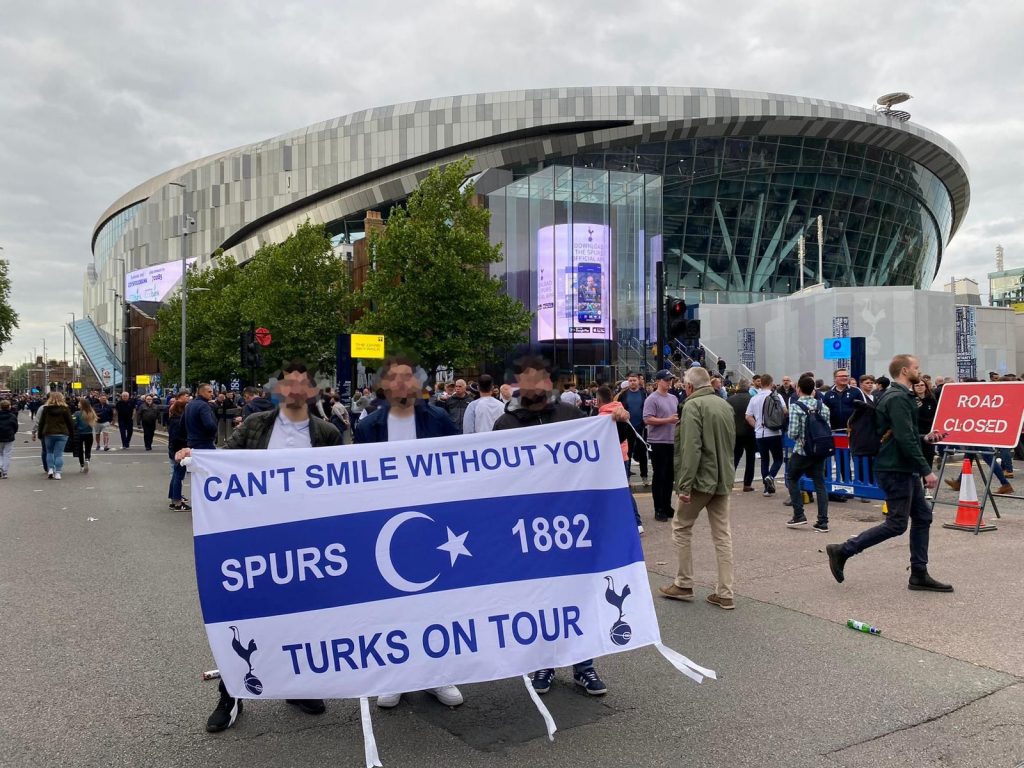 The day after the North London derby on 12 May, when Tottenham Hotspur emphatically beat their arch rivals Arsenal 3-0, my phone was buzzing with people wanting to discuss the game.

We delved into the nature of Spurs’ epic win and its likely impact on the race for fourth place in the Premier League.

We enjoyed hilarious banter with our Gooner friends, who unsurprisingly disappeared as quickly online as their fans had from Tottenham’s grounds as defeat turned into an inevitability.

As T-VINE editor, I also had Turkish Tottenham fans sending me video footage of a new banner – ‘Turks on Tour’ – sighted at the stadium, with requests to find out who was behind it.

I was lucky enough to have a ticket for the rescheduled North London derby (NLD), which had originally been due to take place at the start of the year.

As I joined the throng of thousands making the 1.6 mile walk down from Seven Sisters tube station to Spurs’ ground, the atmosphere was palpably tense.

There was already bad blood from Spurs fans towards Arsenal after they managed to postpone the 16 January fixture with a last-minute request to the Premier League, claiming their squad had been unfairly hit by Covid-19, injuries and absences due to the African Nations Cup.

Adding to the highly-charged build-up – the first NLD with fans at the Tottenham Hotspur Stadium – was the question of which of these two teams would claim the fourth and final Champions League spot.

Going into the game, the Gunners were in fourth place and four points ahead of Spurs. The pressure was on Antonio Conte and his team to win the NLD and give themselves a realistic chance of Champions League football next season.

After months of hit and miss, Conte is now getting a consistency from his Spurs players, who rose to the occasion superbly, putting in a sublime Spurs performance in front of a record attendance of 62,027.

The Spurs fans played their part, offering an awesome vocal accompaniment to the frenetic pace of the match that had end-to-end action for the entirety of 90 minutes.

When Harry Kane converted a penalty in the 22-minute, the crowd erupted. They home side took control of the match and never looked in any danger of relinquishing their advantage to an Arsenal side that crumbled under the pressure.

The Gunners suffered another major blow on the 33rdminute when centre-back Rob Holding was sent off for a second bookable offence, foul against Son. It was one of four yellow cards the team received on the night.

Kane doubled Spurs’ lead with a stooping header within minutes of the visitors being reduced to 10 men, and Son wrapped up proceedings two minutes into the second half.

North London belonged to Spurs, and the delicious manner in which we dispatched the boys from Woolwich was matched by the awareness of the super-cool “Turks on Tour” Spurs banner.

I was sent various videos and pictures of the banner from fans at the NLD, show a large banner in Spurs’ club colours of blue and white.

The top part of the banner was white, with the words ‘Can’t Smile Without You’ in blue, a nod to Barry Manilow’s famous song that can be regularly heard at the Lane and now Tottenham Hotspur Stadium.

The middle part of the banner had “Spurs”, and images of the moon and crescent lifted from the Turkish and Turkish Cypriot flags, and “1882” which is when Spurs was founded.

The lower third simply states, “Turks on Tour” next to the Spurs logo, a cockerel on a football, in the bottom right corner.

Long-term Spurs fan Ozan Mustafa was among those who contacted T-VINE asking about the banner.

Ozan had been at the NLD, describing the atmosphere and energy as “incomparable” to other games: “Our fans were incredible and you could see how it impacted the game and literally not a peep from the Gooners; a stone wall of silence.”

He had joined in the crazy celebrations with other Spurs fans inside the grounds of the Tottenham Hotspur Stadium, when he first spotted the banner.

“I was on the concourse [at the stadium] after the game, where the fans where chanting and singing for more than an hour [after the game ended].

“Suddenly a flag appeared over the mezzanine level, and the crescent moon and star caught my eye. Straight away I thought, “that’s Turkish Tottenham fans”. I then clocked the “Turks on Tour” on the banner, and I was loving it!”

The ‘Turks on Tour’ banner was soon on the move, appearing draped over the adjacent mezzanine balcony right next to a Spurs Greek Cypriot banner that has for years been on display at Spurs home games. It captured the mood of the evening perfectly, as Ozan explained.

“A little while later the glad the Turkish banner appeared alongside the Tottenham Cypriot flag that has been on view for years from the old ground to our new stadium. I thought that was a great coming together, especially after the huge, seminal win against our fiercest of rivals,” said Ozan.

It was left to T-VINE to go find those responsible for this added source of excitement from the NLD, and in keeping with our name, short for ‘Turkish grapevine’, we soon discovered who the protagonists are.

The banner is the brainchild of four young British men of Turkish and Turkish Cypriot heritage. The quartet have, however, asked to remain anonymous, with one of them taking up media duties to talk to T-VINE. Here’s what they told us.

How did the ‘Turks on Tour’ Spurs banner come about?

“We all met through supporting Tottenham this season (2021/22). We had our first planned meet-up when the four of us brought our friends along for the away match against Aston Villa, which turned out to be one of the best days I’ve personally had following Spurs home & away over the course of the past 7-8 years. This was mainly due to the company, and of course the result topped it off.

“There are four of us involved with the flag,  Two of us are season tickets holders, while the other two attend every home game and away game whenever they can get hold of a golden ticket.

“We all just clicked when we met up, which led to a group chat and conversation about how we can make a flag to represent our Turkish heritage side at the club we all love and support.

“The flag was just a suggestion originally, but we all gave our input and after a few tweaks, we finalised the design of the flag that we feel represents Turkish supporters at Tottenham.”

The banner made its first outing at the North London derby, was that deliberate?

“Yes the banner made its debut at the derby.  We were hoping to take it up to Liverpool away, as we all had tickets in the away section for the game, but the banner’s manufacturer couldn’t deliver it in time.

“Luckily it arrived on the morning of the NLD, hence why the special day for us got much better once it arrived.

“We took pictures outside the stadium as a group to keep in the memory book for the future and hopefully one we can look back at 10-20 years down the line.

“It was not allowed inside the stadium sadly as the stewards said it was ‘too big’ and it ‘didn’t have approval from the club’, which just seemed excuses given the far bigger flags on display athe ground – many without approval either.

“Multiple Spurs supporters offered their support, arguing with the stewards about why they should allow our banner in, but sadly they couldn’t convince them. So we just accepted it and got inside the stadium, while the stewards kept it [the banner] in a safe place for us to collect afterwards.”

What’s been the response to the banner by Spurs fans and fellow Turks?

“Haha, you love to see it. The response has been incredible and one we didn’t really expect. All the responses have been positive.

“When we took the flag to Burnley at home on our final game of the season, we got a lot of interest and people coming up to us wanting a picture with it. Some supporters who are Turkish, as well as people who were half Turkish or had married into a Turkish family and wanted to show the rest of their family.”

Will the banner be a regular feature at Tottenham Hotspur Stadium & away games?

“100%. We will be taking it to every game we attend and will take turns taking the flag depending on whether all of us are attending the games or not. But most definitely, the flag will be seen somewhere in Europe next season, as well as down the Lane and away games around the country.”

How did your banner end up next to the Spurs Cyprus map banner at the NLD?

“The owner of the Cypriot flag is a lovely guy named Alex who one of our guys has known for a while. So when we were taking a picture of the flag against Arsenal at home outside the stadium, we saw him not so far away and thought we would invite them over for a joint photo to show.

“It doesn’t matter where you are from nationality wise, we are all Tottenham fans and proud to be.”

How did you find this NLD compared to previous ones you’ve been to?

“There are no words to describe this one. It was certainly special and has to be up there with the best NLD’s I have attended to in my lifetime.

“The atmosphere around the stadium before, during and after the game was absolutely electric. Sitting in the South Stand, we must have heard about four separate chants constantly being sung all at the same time, and to win the game 3-0 in the current circumstances where we are fighting for that final champions league position. It was definitely special. Not to forget it being the first NLD in our new stadium in front of a sold out crowd. It was definitely magical as there was so much at stake.”

Good to their word, the banner is back on the road, with social media tweets showing the new “Turks on Tour” banner on display in East Anglia ahead of the final game of the 2021-22 season. Let’s hope it will be a lucky omen for Spurs, who only need to draw against Norwich to qualify for Champions League season.