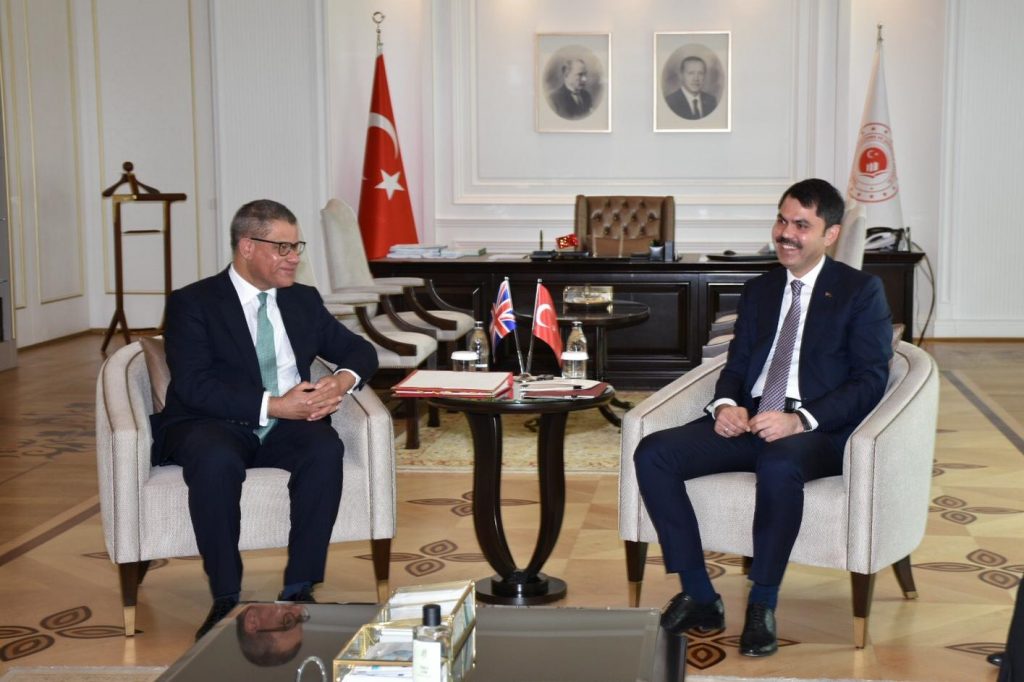 COP26 President Alok Sharma paid his first visit to Ankara last week to strengthen support for international climate action ahead of the vital climate summit in Glasgow this November.

Accompanied by Britain’s Ambassador to Turkey, Dominick Chilcott, the UK Minister met with Murat Kurum, Turkey’s Minister of Environment and Urbanisation, to discuss climate change priorities for the two countries.

Turkey has been in the news recently due to the adverse impact climate change is having on its southwestern coastline. Pictures of the huge build-up of “sea snot” in its waters went worldwide, alarming environmentalists.

The thick, slimy layer of the mucus-like sludge has spread along the Sea of Marmara near Istanbul, which connects the Black Sea with the Aegean Sea, damaging marine life and the fishing industry.

Boats travelling through the Sea of Marmara are struggling to navigate the thick grey sludge, which is also playing havoc with the motors and nets of local fishermen.

Local environmentalists have reported that large numbers of fish and other species, including oysters, mussels and star fish, are dying from a lack of oxygen due to this naturally occurring marine mucilage.

Experts blame this devastating sea snot on pollution, including the dumping of sewage in the sea, and climate change.

The marine issue followed hot on the heels of another environmental scandal, which implicated both Britain and Turkey.

A Greenpeace investigation found that UK plastics were being sent to Turkey for recycling, which were instead being dumped and burned.

Data shows that Turkey receives about 40% of all UK plastic waste. Malaysia was the second biggest destination for British plastic, receiving 65,000 tonnes in 2020, followed by Poland, which received 38,000 tonnes.

Greenpeace investigators in Turkey conducted a study in and around the southern coastal city of Adana in March of this year.

Greenpeace found that plastic bags and packaging from leading British supermarkets and retailers, including Tesco, Asda, Co-op, Aldi, Lidl, B&Q, Debenhams and Sainsbury’s, were being dumped. Some of this waste was burned, others piled into mountains and left to spill into rivers and the sea.

The study’s findings were captured in a report titled Trashed, which proved embarrassing for both the British and Turkish governments.

The UK, however, is not alone in treating Turkey as a dumping ground for its unwanted plastic. Consultancy 360 Environmental estimated that Turkey accounted for almost half of all global packaging waste exports in the first quarter of 2021. The pollution this is causing is clearly outweighing the economic benefits of accepting such waste.

The adverse impact on Turkey’s environment led to a massive public outcry, prompting the Turkish Government to put in motion plans to expand its ban on the import of certain kinds of plastic waste.

Starting in July, the ban will apply to all nations exporting to Turkey and affect PET, HDPE and LDPE imports. These types of plastic are commonly used in products such as beverage bottles, household cleaner packaging, health and beauty care bottles, plastic films, plastic bags and multi-layer packaging like crisp packets.

Minister Sharma’s visit on 16 and 17 June, comes in the wake of these developments, along with decisions taken at the recent UK-hosted G7 Summit where members endorsed further commitments to ramp up action to cut emissions.

The UK has launched a programme to support Turkey’s development of low-carbon projects and identify future financing options.

The bi-lateral meetings also focussed on the urgent need for international collaboration and action against the effects of climate change ahead of the UN climate summit.

✅ To host a UK-Turkey Investment Summit

✅ To work on facilitating an MoU for public finance#COP26 pic.twitter.com/H8Ar1fHVk6

Mr Sharma is responsible for delivering the 26th Conference of the Parties to the United Nations Framework Convention on Climate Change (UNFCCC), known as COP26 for short. The event will take place in Glasgow from 1 to 12 November 2021.

In addition to meeting the Turkish Environment Minister, Mr Sharma also met with Turkey’s Finance Minister, the Deputy Foreign Minister and Deputy Energy Minister, and representatives of big business group TUSIAD. The main issues on the agenda were the priorities for COP26, including the Paris Agreement and the critical goal of limiting a global temperature rise to 1.5 degrees.

“The UK funded Climate Finance Accelerator, launched in Turkey last week, is an example of the two countries collaborating to boost investments in the green economy”, said a UK government statement ahead of Mr Sharma’s visit.

While in the Turkish capital, Mr Sharma noted that Turkey was located in the Mediterranean Basin, which was “climate vulnerable” and his ministerial discussions covered the need “to further the clean energy transition in Turkey.”

Great to accompany @AlokSharma_RDG, the president of the #COP26 meeting in Glasgow, on his important visit to Turkey. Excellent discussions on climate and 🇬🇧🇹🇷shared priorities ahead of @COP26. #ClimateChange is the most important problem for the planet 🌏 pic.twitter.com/yBHX7pKh69

Turkey is already committed to clean energy, energy efficiency, zero-waste and afforestation. The UK for its part has offered additional support towards the country’s ongoing energy transition plans.

Mr Sharma stressed the need for everyone to embrace the ‘Race to Zero’, emphasising collaborative action is needed across society, including the private sector, civil society and youth.

Minister Kurum described his meeting with Mr Sharma as “fruitful”.

Speaking of the significance of COP26, Mr Kurum said: “I think that the COP26 Conference will be a conference that the whole world will follow with interest and attention. I believe that the determination to fight climate change with a strong will would be clearly demonstrated here.”

“Our country’s expectation from this conference is to present an equitable and fair solution for our country’s current position in the fight against climate change. Regarding this, we expressed to the Minister that our country’s access to climate finance should be increased,” the Turkish minister continued.

“Although our country has not signed the Paris Agreement, our country fulfils its responsibilities more than most other countries that have signed it,” he added.

Both UK Minister Sharma and Turkish Environment Minister tweeted about their meeting, with Mr Kurum using the hashtag #TogetherForOurPlanet.