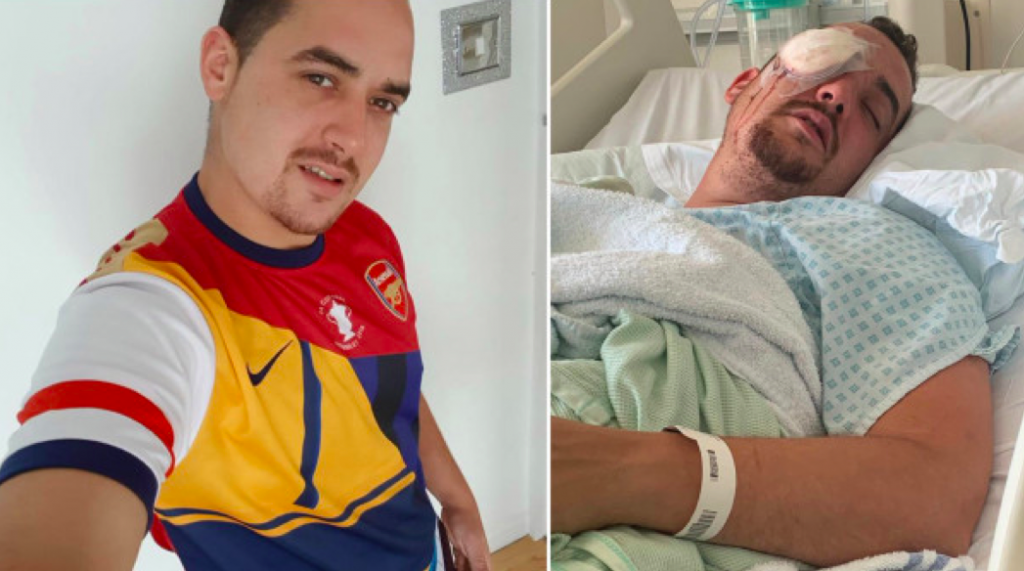 A father of two has suffered life-changing injuries after he was attacked in broad daylight in North London. Tarkan Mustafa, 33, lost the sight in one eye and will need major surgery to rebuild his cheekbone and eye socket after an unprovoked attack outside a chip shop on Stoke Newington High Street.

The incident took place around 7pm on Wednesday 2 June. Mr Mustafa was chatting to a friend by the shop as two young men approached the entrance.

One had a clown-type full face mask on top his head and Mr Mustafa cracked a joke they’d not let him in if he didn’t wear the mask.

The young men took offence and minutes later came after Mr Mustafa and his friend, who decided to walk away to diffuse the situation, only to be followed and set upon by the two young men.

The assailants threw a metal chair at Mr Mustafa, and then repeatedly punched him in the face. One of the attackers struck the father of two with a metal object, possibly a knuckleduster. Both suspects, thought to be in their 20s, then ran off.

Police and the London Ambulance Service were called, and the victim was taken to hospital.

As a result of the vicious assault, Mr Mustafa has lost the sight in his right eye, as well as suffering a fracture to his cheekbone, a broken nose, and a broken finger.

The self-employed builder is now also without any income for his family, prompting friends and family to launch a fundraising appeal to relieve Mr Mustafa of his financial worries. It has raised over half of the £10,000 target set when the appeal went live on 12 June.

The GoFundMe appeal has a picture of Tarkan Mustafa in hospital, who is described as “our happy, carefree, fun loving brother and father to two beautiful young children or at least he was until the evening of Wednesday 2nd June 2021 where he was subject to a violent and unprovoked attack in Stoke Newington.”

The appeal explains the injuries Mr Mustafa sustained that evening “have left a devastating and life changing effect on him not only physically but mentally.”

The ongoing surgeries he will need to rebuild his cheekbone and eye socket, and to insert a prosthetic eye means the self-employed builder can’t work for the foreseeable future, possibly for the next six to 12 months.

The situation has left Mr Mustafa “feeling extremely stressed and worried as he can no longer provide for his children or his self and as his only living family.”

Relatives who launched the appeal say, “Anything you can donate will be very much appreciated and will help Tarkan to relax and concentrate on his recovery and get him back to his much loved job.”

Commenting on the incident Mr Mustafa, who is of Turkish Cypriot origin and lives locally to where he was attacked, told Metro newspaper: “It happened so quickly.”

“We were walking down the road to another chip shop to try and take the sting out of the situation, but out of the blue they ran after us and started attacking me. One of them hit me and they started throwing chairs.

“I tried to defend myself but they charged into me. One of them hit me in the eye and I stumbled back. I heard one of them say, “I done him”.

Police appeal for information about the attack

“One of the witnesses has since said that he had some kind of implement in his hand, I don’t know what it was, it could have been a knife or a pole or knuckleduster, but that’s what he hit me in the face with.

“It’s left me with a ruptured eyeball and fractured my eye socket.

“Just from trying to be friendly I’ve suddenly been attacked. I’ve done nothing wrong, I’ve said nothing wrong and I was walking away, they were just out looking for trouble.”

Det Con Gary Holland of the Central East Command Unit, said: “A simple joke had led to a man being so badly beaten that he has lost sight in one of his eyes. How can it be that a trivial remark has led to such terrible consequences?

“Any rightminded person reading this will know how wrong this is and I am asking anyone who knows anything about this assault to call police.

“You can also call Crimestoppers if you do not want to give your name, but please do call and tell us what you know.”

Any witnesses or anyone with any information is asked to call police on 101 or contact via Twitter @MetCC. Please quote CAD 7077/02JUN

To give information anonymously contact Crimestoppers on 0800 555 111 or online at crimestoppers-uk.org.