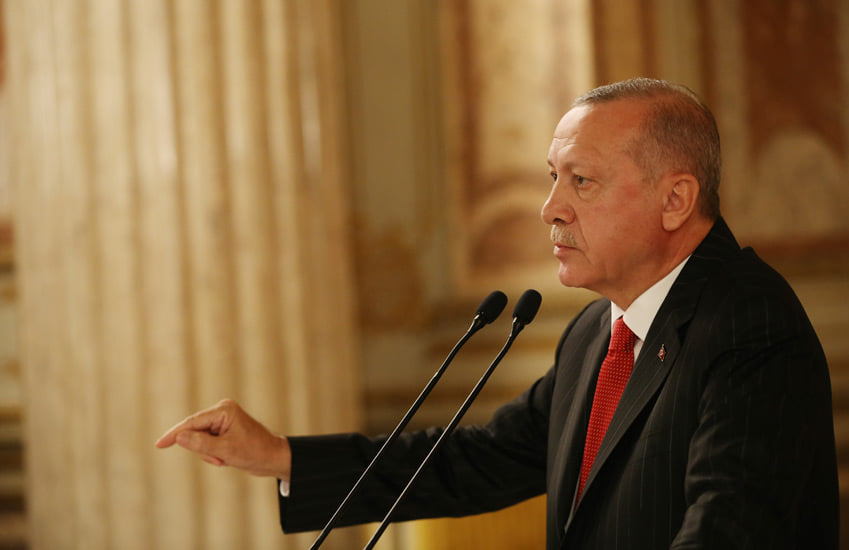 TURKEY has launched a staunch defence of its military campaign in north-eastern Syria following an international backlash.

The country began a large-scale military incursion, which it has called Operation Peace Spring, on Wednesday, 9 October, with the aim of creating a “safe zone” on the other side of its border with Syria.

The operation went ahead after US President Donald Trump pulled American forces, who had been there to support the fight against Daesh, also known as Isis, away from the area, effectively giving the green light to Turkey.

Turkey says it wants to clear the area of terrorist groups, which it says are linked to the outlawed PKK, so that some of the over 3.6 million Syrian refugees it has been hosting for years within its borders can settle there. Critics say such a move could create ethnic tensions because many of the refugees are not from that part of Syria.

The operation has been condemned by senior figures in the US, and in other countries, with under-pressure Mr Trump warning that he would “obliterate” Turkey’s economy if it did anything that was “off limits”.

The United States has prepared economic sanctions that could be used against Turkey, a Nato ally, while France and Germany have halted arms sales to Turkey in response.

Meanwhile Turkish officials have become exasperated over depictions of the operation by foreign government officials and in Western media reports as being “against the Kurds” and of the groups they are fighting as being America’s “allies”.

An example came on Sunday when CBS Face the Nation presenter Margaret Brennan told US Defence Secretary Mark Esper that “our allies” the “Syrian Kurds” were “being left to be slaughtered”.

Mr Esper responded by saying that “the Kurds have been very good partners in the Isis campaign” but that “we didn’t sign up to fight the Turks on their behalf”.

Another example, highlighted on Twitter by British Turkish researcher Dr Ziya Meral, was of a BBC News website explainer on the operation, published on 11 October, which included the question: “Why is Turkey bombing the Kurds?”

“Why is Turkey bombing the Kurds?” What a language BBC.. well done.. Did US bomb Arabs in Iraq? Afghans in Afghanistan? When UK clashed with IRA, did we clash with Irish? When Israel strikes does it bomb Palestinians or Shiites or Persians? How we report Assad and Russian bombs? https://t.co/tvsY9CnAHD

“What a language BBC, well done,” Dr Meral wrote. “Did US bomb Arabs in Iraq? Afghans in Afghanistan? When UK clashed with IRA, did we clash with [the] Irish? When Israel strikes does it bomb Palestinians or Shiites or Persians? How [do] we report Assad and Russian bombs?”

Another Twitter user pointed out: “They wouldn’t call the drug cartels on the southern border of the USA as ‘Mexicans’.”

Ümit Yalçın, the Turkish Ambassador to the UK, asked for the British public to “understand Nato ally Turkey’s legitimate security concerns” during an interview with BBC’s Newsnight last Wednesday.

“Our aim, is to ensure the safety of our border and to neutralise the terrorists in our border area, and thus saving Syrians, local Syrians, from the oppression and cruelty of terrorist organisation PYD/YPG and to create a safe and peaceful environment for the dignified, safe and voluntary return of refugees,” he said.

Put to him by Maitlis that Turkey had made a “terrible mistake” by entering north-eastern Syria and that Kurds there faced an “existential” threat that would “wipe out their homeland”, Mr Yalçın replied: “This is not a mistake. . .  Putting the equation as ‘Turkey versus Kurds’ is very wrong and profoundly unfair. If you think, [there are] more than 300,000 Syrian Kurds in Turkey, [who] we have been giving shelter to and if you think [of] those more than 300,000 Syrian Kurds who could not go back to their homes in those areas then I think you should understand my complaint about this equation. This operation is not against Kurds and there is no existential threat for Kurds.”

Told by Maitlis that this was “not about the PKK” and that people were “fleeing their homes” Mr Yalçın replied that Turkey was “not targeting civilians” and that the PKK was supporting the PYD/YPG “bunch of terrorists”.

“We call on our allies to cooperate with Turkey, to show solidarity with Turkey against Daesh, against terrorists,” the ambassador said.

“Against Daesh and Isis Turkey [has been] a member of the international coalition from the beginning. Trusting a terrorist organisation and relying on them against Daesh instead of trusting and relying on a Nato ally and the second biggest army of Nato is illogical.”

On fears that thousands of members of Daesh held in north-eastern Syria could use the clashes as an opportunity to escape, Mr Yalçın said they were already being released “in exchange for carrying out terrorist attacks” in Turkey and other parts of Syria.

Mr Yalçın said that Turkey was “prepared to take all the responsibility [for] Daesh terrorists in those [prison] camps” but called on other countries to arrange for the “repatriation” of those who are their own citizens.

Top Turkish figures have also been trying to get their message across with articles placed in US daily newspapers.

Foreign Minister Mevlüt Çavuşoğlu, writing in the New York Times last Friday, said it was “dismaying” that Turkey’s military operation in north-eastern Syria is being “spun in the American news media as an attack on Kurds, as weakening the fight against the remnants of Daesh . . . and hurting America’s credibility with its allies”.

“The PYD/YPG may present itself to the world as the group that fought Daesh, but it also smuggles explosives to the PKK by digging tunnels into Turkish soil,” he wrote.

“We have found its members ushering Daesh prisoners toward Turkey. And in November 2017, the BBC reported on a secret deal under which the Syrian Democratic Forces arranged transport and allowed hundreds of Daesh terrorists to escape during the coalition operation to liberate the city of Raqqa.”

Stressing that Turkey’s fight is “not against the Kurds”, Mr Çavuşoğlu added: “Our fight is against the terrorists. Any description of the situation as ‘Turks against Kurds’ is malicious and false. Kurds are not our enemies.”

An earlier article by Fahrettin Altun, Turkey’s communications director, published in the Washington Post, said that Turkey has “no ambition in north-eastern Syria except to neutralize a long-standing threat against Turkish citizens and to liberate the local population from the yoke of armed thugs”.

It showed a clip of President Recep Tayyip Erdoğan saying: “Our mission is apparent, loud and clear. We’ll wipe out the terror corridor. We’ll build a peace corridor, God willing.

“It’s our aim to establish a safe zone. This step is for the Syrian people and our Syrian refugee brothers and sisters in Turkey to return to their country and their homes.

“No harm will come to the civilians in Syria.”

In the clip he goes on to say: “I believe that our Turkish Armed Forces, along with the Syrian National Army, will have great success against PKK/YPG and Daesh terror groups in northern Syria. We’re proud of them.”

Meanwhile the President of the Turkish Republic of Northern Cyprus (TRNC), Mustafa Akıncı, came under fierce criticism both at home and in Turkey after he issued a statement at the weekend that failed to support Turkey’s operation in Syria or condemn terrorist activity.

Mr Akıncı, in a lengthy personal Facebook post that has since been hidden from public view, said that it was “blood not water” that was being spilt in Syria, in reference to the term “Peace Spring Operation”.

He also said that Turkey’s 1974 Peace Operation in Cyprus was “a war where blood was spilt”, calling for Turkey to engage in “dialogue and diplomacy” over Syria as soon as possible.

The statement was slammed by Mr Erdoğan, who blasted Mr Akıncı for “overstepping the mark”.

“The seat he sits on is not something he acquired,” Mr Erdoğan said. “It was won by the intervention of the Turkish Republic, a favour from Turkey.

“I believe that the people of the TRNC will give him the lesson he needs.”

On Monday, October 14, the TRNC Parliament held a minute’s silence for those who lost their lives in Cyprus in 1974 and during the current operation in north-eastern Syria.